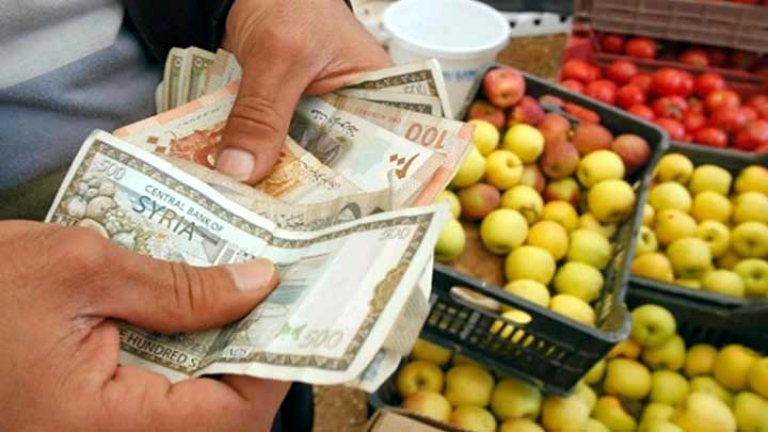 Stories | 23 Jan 2020
"We mostly depend on herbs and legumes amid the crazy rise of prices, and others have replaced the  household items as they no longer cook daily, due to their inability to buy what they used to buy in the past," said Umm Muhammad, a Syrian woman residing in Hama, to Rozana.

In light of the increase of foodstuff prices that the Syrians described as "extreme" as the Syrian Pound exceeded 1,000, people resorted to low-priced foodstuffs such as lentils, bulgur, cabbage, and leafy vegetables such as spinach and chard.

On the other hand, it seems that the ongoing financial and banking crisis in Lebanon is still the main factor in the continuing deterioration of the exchange rate of the Syrian Pound against the US dollar.

Since the beginning of the currently ongoing widespread popular protests in Lebanon that started in mid-October 2019, the exchange rate of the Syrian Pound has witnessed unprecedented record declines in the history of Syria.

In early November, the exchange rate exceeded the barrier of 700, while on December 21, the dollar reached 920 Syrian Pounds per dollar.

With the beginning of this year, and amid the continuing popular protests rejecting the political quotas system in Lebanon, the exchange rate has crossed the threshold of 1,000 Syrian Pounds per dollar and has amounted days ago to 1,150 Syrian Pounds.

Effects of the continuation of the Lebanese banking crisis:

Economic researcher, Dr. Firas Shaabo, considered in an interview with Rozana that the consequences of the banking crisis in Lebanon are still casting significant effects on the exchange rate of the Syrian Pound, especially the restrictions on the use of Syrian deposits in Lebanese banks, estimated at $ 30 billion.

"The dollar is nowadays being largely smuggled from Syria to Lebanon, and this significantly affects the exchange rate of the Syrian Pound," added Shaabo.

In line with Shaabo’s statements, the economic expert Younis al-Karim indicated in an interview with Rozana that Lebanon is the lung from which the Syrian regime breathes economically, pointing out that the Syrian regime could circumvent US and European sanctions thanks to Lebanon.

"The Syrian regime considers Lebanon as an import and export platform and the financial base through which it can deal with the outside world in financial transfers. Therefore, any change in the Lebanese situation will negatively or positively affect the Syrian regime," added al-Karim.

He pointed out that Lebanon is drawing twice or thrice as much fuel as its need, noting that this increase is heading towards Damascus, which means, according to him, that the Lebanese political parties supporting the Syrian regime were using the hard currency to buy Damascus’s oil needs.

Al-Karim considered that regional and international acting parties in the Syrian affairs are trying to use Lebanon to pressure the Syrian regime in order to push it towards a political solution, and to turn Lebanon into a platform to interfere in the Syrian issue from the economic way.

In another context, Shaabo considered that al-Assad's economic-related decrees, which he issued, last Saturday, are purely related to security solutions and have no positive effects on the Syrian pound.
On Saturday, al-Assad, issued a legislative decree stipulating maximizing the severity of the punishment for anyone dealing in currencies other than the Syrian pound.

According to the decree, every person who deals in a currency other than the Syrian pound as a means of payment shall be “punished by temporary imprisonment with hard labor for a period of no less than seven years,” and he shall also be punished with “a fine equivalent to twice the value of the payments or the amount involved or paid or the services or goods offered”, in addition to confiscating the payments, the sums involved, or precious metals in favor of the Central Bank of Syria.

This year’s third decree was issued by al-Assad at a time when the Syrian pound continues to deteriorate against other major foreign currencies. According to the exchange rates in Damascus’s markets on Saturday, every one US dollar recorded 1240 Syrian pounds for sale, 1220 Syrian pounds for purchase. Thus, the deterioration of the value of the Syrian pound was also accompanied by a significant increase in the prices of goods and alimentary commodities.

In line with al-Assad’s decree, the Central Bank of Syria announced yesterday, Monday, allowing the Syrian citizens to purchase foreign currencies at a preferential price that was set at 700 Syrian pounds for the US dollar, as the selling price was set for by the organizations and bodies of the United Nations and embassies at 700 pounds in December 2019.
Shaabo pointed out that the Syrian regime is totally incapable of controlling the monetary policy tools, including the exchange rate and the ability to regulate the cash supply and volume circulating in the market, in addition to the interest rate and the legal reserve price.

Despite the deterioration in the exchange rate of the Syrian pound, which exceeded the barrier of 1000 since the beginning of the New Year, the Syrian Central Bank is still indicating that the price of one US dollar does not exceed 438 Syrian pounds according to what was mentioned in its first weekly economic report for the year 2020.

A report issued by the Central Bureau of Statistics, last November, indicated an increase in inflation (average prices of goods and services) in January of 2019 by 826 percent, or 8.25 times compared to January 2010, which is the base year.
According to the data provided by the Central Bureau of Statistics, inflation increased in January 2019 by 4.8 percent on an annual basis, compared to January 2018, while it augmented by 1.8 percent on a monthly basis, i.e. compared to December 2018.