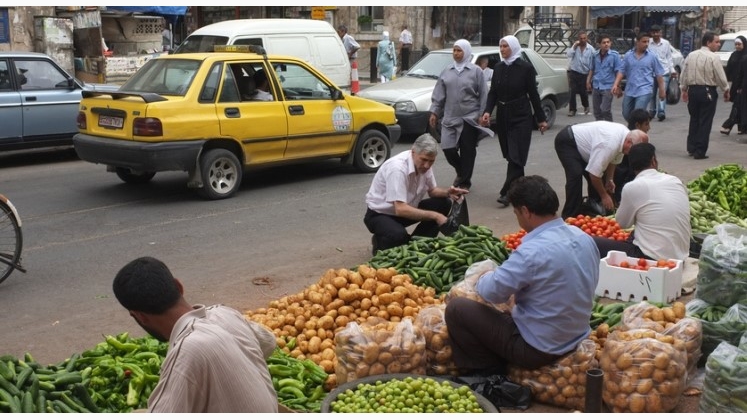 "We want to live," a phrase raised by demonstrators in As-Suwayda last week, summarized the pain of millions of residents in regime-controlled areas, where it does not seem that the livelihood of citizens is possible at the present time amid soaring prices that reached a level that even middle-class people cannot afford three meals.

Most of the foodstuffs are forgotten

For five months, the word “meat” has not been heard in Abu Wael’s house. The man who works as a teacher has forgotten the word meat after its price exceeded 10,000 Syrian Pounds per kilogram. He also canceled many foodstuffs that he says are no longer necessary.

Abu Wael, who lives in Aleppo, passes by the butcher in his neighborhood, finally decides to forget the list of canceled food, and enters to buy meat, but he retreated and only bought mutton fat, which costs 5,000 Syrian Pounds per kilogram.

Hardships are not limited to Abu Wael, as Muhammad al-Hamawi, a young Syrian man residing in Hama countryside, told Rozana that cooking is no longer as simple as the word itself. It has become a very difficult matter, especially when it is related to vegetable oil, which costs 1,500 Syrian Pounds per liter. It is also related to the most important thing, which is household gas, which is scarce in houses, and the pure prepared oil costs up to 10,000 Syrian Pounds.

In a falafel and fries sandwich, a family of five members will need more than 2,000 Syrian Pounds only for one meal.

"Herbs and legumes are the most reliable foodstuffs now, amid the crazy rise in prices," said Mona al-Sayed, who lives in Damascus, to Rozana, adding that "most people have started consuming low-priced foodstuffs, such as bulgur, cabbage, lentils, chard and other leafy vegetables."

On the other hand, the price of red meat has reached more than 15,000 Syrian Pounds, while the "vegetable" frying oil has reached 1,300 Syrian Pounds. This is in addition to many other foodstuffs, which prices have increased and which has become impossible for a considerable number of Syrians to buy.

What remains for the Syrian citizen to eat besides bread, amid the difficult conditions he endures? The Syrian regime is subjugating the starving population by telling them that the bread is subsidized.

Um Muhammad, 41, from Aleppo, told Rozana: “I know many families who only can afford bread to calm their hungry stomachs, as there is no alternative to it. Their income is hardly enough to buy bread and rent a house instead of the homes they lost in their destroyed neighborhoods in the eastern regions.”

According to Um Muhammad, many inhabitants in Aleppo try to make the bread taste better by making a toast with tomato jam. This food came to be known in Aleppo as the “Mia Franji” sandwich, which is a type of sandwiches that the locals in Aleppo used to eat occasionally, rather than a permanent and irreplaceable meal.

Um Muhammad added: "Others depend on thyme, as an affordable supplement they add to bread or tomatoes, in order not to juggle their insufficient budgets."

Many Syrians ask then: "What about the aid that the Syrian Red Crescent or charities provide?" Mamoun, 30, from Hama countryside, answered the question in an interview with Rozana: “Corruption has left nothing for the needy, except for a few. Only a few Syrians are benefiting from the aid. On the other hand, many beneficiaries are obliged to sell the aid they receive, to get some cash.”

"The charities no longer distribute cans. It seems that the aid is being stolen, too," Um Muhammad added.

In June last year, Human Rights Watch (HRW) accused the Syrian government of exploiting humanitarian and reconstruction aid, and warned the humanitarian actors of the risk of playing a role in human rights violations.

HRW clarified in its report that the humanitarian organizations working in Syria are forced to accept the demands of the government of the regime for fear of losing their ability to reach the targeted groups or hinder their activities.

The expert and economic analyst, Younis al-Karim, told Rozana that the ongoing depreciation of the value of the Syrian pound will have a devastating effect on the lives of citizens, as this will cause a decrease in the purchasing power, and in this case Syrians will not be able to obtain ba