Who profits from dollars in Syria? 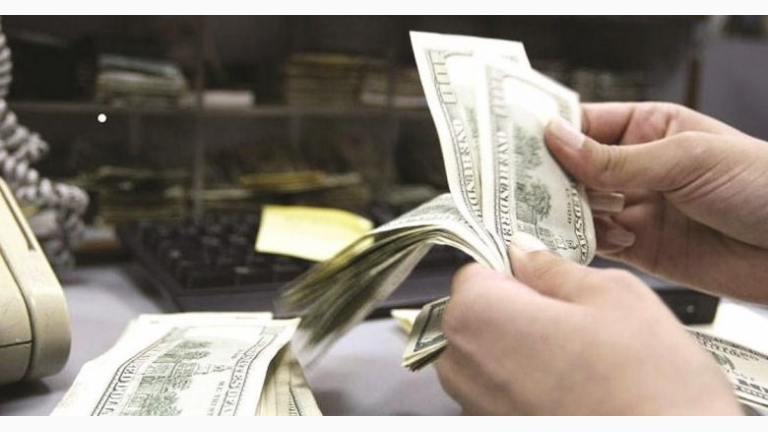 Syrians residing outside Syria constitute the lungs with which the Syrians stuck inside the country breathe, in light of the economic blockade from which the simple citizen is suffering.

In this context, recent World Bank estimates indicated that the value of Syrians’ external money transfers reached in 2016 about 1.62 billion US dollars, or about 737 billion Syrian Pounds based on an exchange rate of 438 Syrian Pounds per one US dollar, and an average rate of 4.5 million dollars per day.

Despite the fluctuation of the dollar exchange rate in the markets, the government of the Syrian regime imposes a unified exchange rate, 434 Syrian Pounds per one dollar, on the official and private money transfer offices.

While the dollar exchange rate last month reached one thousand Syrian Pounds per one dollar, that is, twice the price set by the Central Bank, he is still receiving money transfers according to the price of the Central Bank, which means that Abu Mahmoud and others lose half of the value of the received transfers.

Ali, who works in a money exchange company, explains to Rozana that the state receives a commission rate on every money transfer operation, and adopts the dollar exchange rate set by the Central Bank. The money transfers are only received in Syrian Pounds.

Due to this measure, the government of the Syrian regime benefits from the transfer commission and the profit it gains from the exchange rate difference between the black market and the Central Bank, especially with the determination of the ceiling value of the money transfer per person to no more than $ 400 per person.

Traders tend to adjust the price of materials according to the black market, despite media claims by the government of the attempts to control the markets.

Exchange rate according to the Central Bank - October

The price of one dollar reached about 1,000 Syrian Pounds at the beginning of December, which is beyond the price (twice the price) set by the Central Bank. Nevertheless, the permissible price for receiving money transfers remained 434 Syrian Pounds.

Thus, the government of the Syrian regime won more than 50 percent of the value of money transfers in that period, after which the dollar would return to about 797 Syrian Pounds for sale.

Madiha (pseudonym), a forty-year-old woman, is married to an expatriate husband living in the Gulf, who transfers to her a monthly sum of money that helps her to live in a decent way. However, Western Union often restricts money transfer operations.

According to her, the company abroad canceled her transfers several times. In such a case, she is obliged to transfer the money in the name of a relative to be able to receive it.

The Western Union Company is one of the oldest and most secure international companies specialized in transferring money around the world. It is based in the USA in the state of Colorado. Many people prefer this company over other companies providing similar services, because of the speed of money transfers and the ease of receiving them from anywhere in the world. Despite the US sanctions imposed on Syria, the company still operates inside the country through its agents.

In an attempt to circumvent the restrictions imposed on money transfers, some have sought to create a new money transfer mechanism. Syrians exchange the value of money transfers within their countries of deployment.

In addition, Syrians outside the Middle East resort to the Lebanese financial system as a channel to send money to their relatives, estimated at hundreds of millions each year.

Residents outside Syria also send bank transfers to their families through the banks of Lebanon, from which money is transferred by taxi drivers to reach cash in Syria.

However, the Lebanese banks’ decision to impose financial ceilings on money withdrawals and their almost suspension of external money transfers has hindered this method.

Baligh (a pseudonym for an employee in a government institution), says: "This is an incomplete happiness", the increase is subject to taxes and thus the real value of the increase is 8,500 Syrian Pounds.

Baligh is a first-degree employee and his salary is considered high compared to his second-degree co-worker, whose salary increase has reached 11 thousand Syrian Pounds.

In contrast, dues to obtain the increase for the second month of those working following monthly contracts, such as doctors residing with the intention of specialization and others, in addition to daily workers with annual contracts, have been late because they get paid after a month of work.

No single penny is left for “dark days”...

Since the beginning of the protests in Syria, Mahmoud (pseudonym), a fifty-year-old trader, has bought Syrian Pounds, gold ounces and foreign currency before the increase of prices. Whenever he was forced to purchase commercial materials, he sold a portion of these savings, taking advantage of the price difference. However, he considers that he has lost. He says that he will have to sell his store, as savings are running out.

The exchange rate of the dollar remained stable against 48 Syrian Pounds until the end of 2011 and reached 59 Syrian Pounds.

Renting real estate is an old method used by the Syrians to secure income, and the demand for them has increased after the war that, according to the World Bank, destroyed 1.7 million houses until 2018, which constitutes about a third of the total number of houses in the country.

Rent prices have increased in an unreasonable way, with the availability of services in the areas distributed between suburbs up to the center of the capital, as prices start from 40,000 Syrian Pounds and reach 500,000 Syrian Pounds in Damascus.

Abu Ali (a pseudonym), 70, has three sons each of whom has an apartment. As he owns a large house, he let his sons live with him and rented their houses to take advantage of the monthly rent and use it for their daily living.

The situation may be affordable, comfortable and sometimes acceptable for those who were able to save money, but those who live day-to-day or with a limited monthly salary are below the poverty line trying their best to stay alive until this storm hitting Syria ends.

Referring back to the control of the dollar price, the economic researcher Younis Karim told Rozana that declaring the state of economic emergency by the Syrian regime would have allowed the reorganization of consumption pending economic stability, which necessitates setting a temporary budget every 3 months that is reviewed within an annual plan so that the evaluation of the currency exchange rate is made every 3 months.

Karim stressed that Article 27 of the general budget, which stipulates the postponement of public debt until 2035, will not allow the adjustment of the dollar exchange rate against the Syrian Pound.