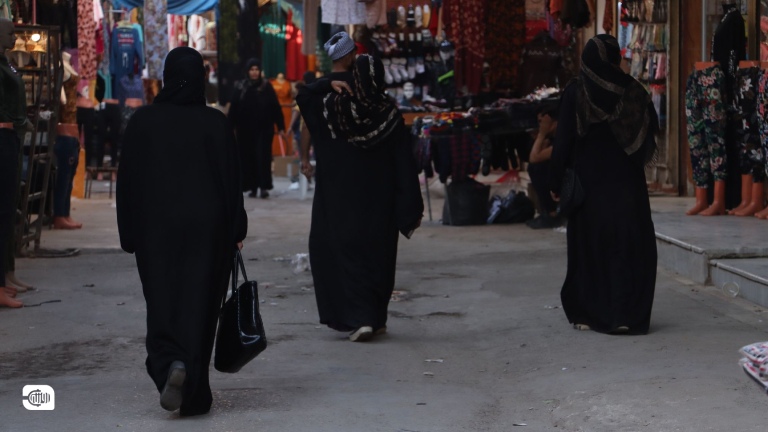 Um Mahmoud, a woman who returned from Al-Hawl camp to the city of Raqqa after three years of detention, was deprived of some of the humanitarian assistance provided by organizations in the city because her sons were killed with ISIS. Now, she experiences a difficult humanitarian situation due to her inability to secure her family's daily needs and provide treatment for her two daughters.

Women who returned from the Al-Hawl camp to the city of Raqqa suffer from the problem that society does not accept them, they are stigmatized for their association with ISIS, and they are called "Daishiat" (women of ISIS) by the people close to them, not to mention their depriving of their rights to aid or services.

Securing housing, daily needs and treatment are the most prominent problems facing women who returned from Al-Hawl camp, especially since most of Raqqa's people suffer from poverty and the inability to provide for daily needs. What makes matters worse for women is the absence of a breadwinner and the lack of job opportunities for women in the region.

After "ISIS" had taken over the city of Raqqa, two of Um Mahmoud's sons joined the organization and she was unable to prevent them. One of them went missing and the other was arrested by the "Syrian Democratic Forces (SDF)", while her husband died as a result of the battles that took place in the city.

The woman was detained with her remaining children in the Al-Hawl camp for three years, then she was released two years ago after mediation by a tribe leader in the city. However, she experienced poverty, need and deprivation of her most basic rights, such as depriving her of humanitarian aid, in addition, her neighbours did not accept her, "I faced many difficult matters and problems, one time I went to ask for aid from one of the parties operating in the area, but they refused to help me, and told me you are a family affiliated with ISIS and come to ask for aid, I left them crying," she said.

"The same thing was repeated when one of the employees visited us to register for aid, and when he saw our family book, he started asking me about my sons and asked me to bring him a document proving that my son is missing, while I am unable to obtain such a document." She added.

After leaving the camp, Um Mahmoud lives in a state of constant fear from her relatives and neighbours due to their view of her. She said with a tearful voice, "I have no concern in this life except to live in safety, and to provide treatment for my two daughters who are unable to walk."

While Ola, a woman released from the Al-Hawl camp, suffered from the problem of providing housing for her and her daughters due to the high rents and household requirements, which forced her to live with her family. "I live with my family, which consists of my mother, my brothers, my sister-in-law and her children, besides me and my three daughters. They are basically suffering from poverty, and with the increase in our number, the basic needs of the house increased, such as supplies and daily needs, while we are unable to secure them in this difficult situation," Ola said while describing her situation to Rozana.

Khadija wonders about society's refusal to accept them as women who returned from the camp, saying, "We are trying to integrate into society, but why does society reject us? Knowing that we basically belong to this society."

While Afraa was overjoyed after she managed to leave the camp in October of last year, on a tribal sponsorship, she collided with reality outside the camp because the society did not accept her due to her husband's previous joining the organization, and today he is detained by the "Syrian Democratic Forces."

Afraa says, "After our return, we faced a feeling of estrangement, even by the closest people, especially the family and neighbours, and there was no suitable place to live in." Among the most questions that she received from her family and society was about her information about her husband's fate, but she stressed that since their departure from the areas controlled by ISIS at the end of 2017, she does not know anything about him. "Despite my insistent demands to the ruling administration and members of the (conflict resolution committees) to give us satisfactory answers, but in vain."

As for Nour, a twenty-year-old woman from the town of Hajin in the eastern countryside of Deir Ezzor governorate, and a mother of four children, she lived half of her life between camps and war zones, she confirms her disappointment about improving her living conditions, especially after she faced society's rejection and daily quarrels with her neighbours: "Most neighbours and the social environment are afraid of my children, and they ordered their children not to play with them, it is so hard feeling to accept this reality," Nour said.

Nour was dreaming of a normal life away from the suffering of the camp and the harsh severe living conditions in the areas controlled by "ISIS". However, she found herself in a society that rejects her, but she no longer cared much about this treatment due to her concern about facing the hardships of life and securing living expenses for her family.

The women who returned from the Al-Hawl camp are suffering another problem added to their previous ones, which is enrolling their children in schools or obtaining a document proving the child's nationality in case the father is of a foreign nationality, which leads to depriving children of many of their rights such as education and health care.

Khadija faced many obstacles until she managed to obtain documents proving the nationality of her children to enrol them in school. While Marwa was unable to secure a document proving the nationality of her daughter, whose father is of Moroccan nationality, although she tried to search for his relatives and reach them, they could not help her, and she became unable to provide treatment for her daughter who is unregistered.

Marwa tells "Rozana" her story after she became tired of thinking about her daughter’s future and her current situation since she is unregistered. She says, "Today, I live with constant struggle and thinking about registering the child, and how to be officially recognised and get treatment because she suffers from a disease since birth."

At the end of last year, the "Oxygen Shabab" organization formed a committee for resolving the conflict in Raqqa, which works to integrate women and children who returned from Al-Hawl camp into society, by providing them with a range of services in coordination with the "Autonomous Administration of North and East Syria (AANES)" institutions in the region.

The committee consists of ten people, three of whom are civil society women activists and tribal notables, judges, and activists. They have worked during the past period to solve many problems of families returning from the camp. In October 2021, they launched the "Among Your Family" campaign. Ahmed Hanfeesh, a member of the committee told Rozana about the mechanism of the committee's work, he says: "This committee works for reconciliation from the perspective of the psychological trauma that our region suffered from, and works to build peace, justice and mercy."

"A roadmap for action has been formed and one of its priorities is to check the conditions of the families that returned from Al-Hawl camp, which include sons of ISIS members. They are orphaned children and widows, and their number is estimated in the thousands. The committee works to identify their suffering and work to overcome their difficulties and integrate them into society so that they will enter another course," Hanfeesh added.

As for the Syrian women married to foreigners, Hanfeesh confirms that their case is still in the process of discussing with the Civil Status Directorate, without reaching a final solution. However, he confirmed that they had received promises to solve this problem and grant them temporary cards.

Regarding the issue of aid and the provision of job opportunities, Hanfeesh says: "The economic situation in the region is difficult, and we are facing a great challenge, however, we seek to secure humanitarian aid to these families in coordination with charitable organizations, associations, and if one of the women has qualifications, we also seek to secure job opportunities. Moreover, we always work to encourage women to enrol in training courses in the fields of computers and hairdressing, so that we can link these women with organizations and associations and secure them with job opportunities."

Bashar Al-Karraf, the Executive Director of the "Oxygen Shabab" organization, says the workshops and activities organized by these associations shed light on the priority of the needs of women and children returning from Al-Hawl camp, saying: "We discussed the ways to stabilize these families and to strengthen civil peace in society to solve all the problems the families are facing through individual solutions to each problem separately."

According to the director of the "Oxygen Shabab" organization, these committees and civil organizations contributed to reducing the stereotype of these families who return to their hometowns. He says: "They were freed from the accusation of belonging to a military faction and a specific organization, they faced bullying problems by the society and a sense of isolation and un unjustified rejection. All these families are composed of innocent women and children who have nothing to do with these wars." He concluded his speech by saying, "Our goal is to integrate them with their families, try to make them accepted by everyone, and help them put an end to the past and forget the horrors of war."

The number of women who returned from the Al-Hawl camp to Raqqa governorate reached 873, accompanied by more than 2,500 children. They need urgent assistance to improve their economic situation and integrate them into society, according to the Conflict Resolution Committee in Raqqa.

You can listen to the "A returnee from Al-Hawl" episode of the "What is the solution", by clicking here.