How the Elderly People Live in the Camps of North-Western Syria? 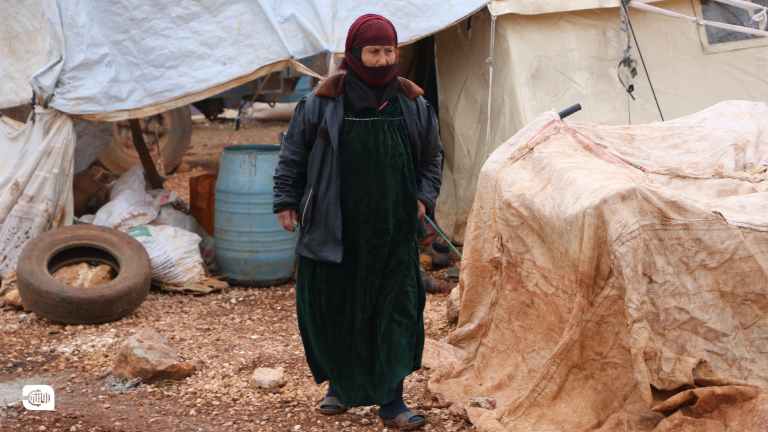 Burdened with many memories and pain, with one leg, after diabetes amputated the other, Abu Ali (73 years) lives with his wife in their tent in the Rief Al-Mohandessin camp near the town of Al-Tawamah, west of Aleppo. He also suffers from many diseases such as severe hypotension, as his life became so difficult.

Chronic Diseases and the Suffering of Treatment

All camps in northwestern Syria include a large number of elderly people, and among the most prominent problems that affect their lives are suffering from chronic diseases, and the constant need for treatment or medicine. So, their poor financial capabilities and the constant unavailability of free medicine exacerbate their suffering.

"I live in this tent with my wife after my sons travelled to Turkey for work, and I persistently need medicine, but the high prices of medicines in pharmacies and my poor financial ability make me unable to buy medicine, especially insulin injections that I must regularly inject." Abu Ali said describing his condition.

Random camps are spread throughout northern Syria, and most of them are camps without any services and lack the minimum necessities of a decent life, which double the suffering of the sick and special needs people.

Sobhia Haj Mustafa (52 years), a displaced woman who resides in the Harsh al-Zaydiyah camp near the city of Afrin, north of Aleppo faces all life's hardships in the camp. She suffers from kidney disease, diabetes and hypertension, and what hurts her is that she needs to make surgery to break up kidney stones, which costs 700 dollars, while she does not have a single dollar. "I need a wheelchair to help me move around, and since the beginning of our residency in this camp, we did not receive any medical assistance or visits by mobile clinics," she painfully said explaining her condition.

While Abdulmalik Abdurrahim, director of Harsh al-Zaydiyah camp, told "Rozana" about the health status of the elderly people in his camp, "In our camp, we have 25 elderly men and women, all of whom suffer from difficulty in movement and mobility as a result of diseases in their legs, in addition to their suffering from cancer, hypertension and diabetes," he said.

Abdurrahim called on humanitarian organizations and the Health Directorate to support the camp's elderly people by providing medicines, wheelchairs, and beds for orthopaedic and joint patients.

The Road to the Toilet is Long and Tiring

The suffering of the elderly people in the camps does not stop with securing treatment and medicine but continues to include the simplest and most needed matters. Within some camps, there are public toilets that are 10 to 50 meters away from the tents, and this problem of distance increases life's difficulties and adds new suffering to the suffering of the elderly people. The toilets are shared among the residents of the same camp, so a caravan or cement blocks that include one bathroom are installed for every five families.

"The road in the camp is too bumpy, and the toilets are far away," said Samir Asaad (57 years), a displaced person in one of the camps of Deir Hassan town, north of Idlib. "When you go to the toilets you fall many times, and upon arriving, you do not find water while the filth is scattered inside, not to mention the poor sanitation networks and the permanent closures that take place within these toilets, so you return to your tent while you are covered with filth." He added.

As for Abu Hassan, a resident of Khaled bin Al-Waleed camp near the city of Sarmada, north of Idlib, he suffered from fractures last winter while going to the toilets at night, because the camp did not contain lights. "I took a little light with me to light up in front of me, when I got to the middle of the road, I did not pay attention to a hole in the road, so I slipped and fell on my back, which led to a fracture in the pelvic area." He says while lying on his back and unable to move.

Bathing is a great difficulty for these elderly people who have been forced by circumstances to live in camps, as there are no special places for bathing in some camps, which forces them to take a bath inside a tent. Sobhia says: "We are not financially able to heat water by gas in winter due to its high price, so we have to heat it on wood stoves outside the tent, and when the water enters the tent it becomes cold, while our bodies are not able to withstand cold water, especially in the winter."

Perhaps the peak of suffering concerning the toilets issue is with the elderly people that have disabilities, which Mona Khalil talks about. She is a displaced woman who resides in a camp in the town of Aqrabat, north of Idlib, and takes care of her mother-in-law, who suffers from a knee joint disease. The camp toilets are designed in the normal form and not the western-style toilets that are suitable for elderly people. She says: "When we take her to the bathroom, we face great difficulties in dealing with this type of toilet, and we do not have space near our tent to build a private western-style toilet for her."

Sometimes there is no breadwinner to take care of the elderly people, which forces them to take care of themselves on their own and to secure their basic life needs. Some elderly are forced to go to shops in camps or markets in neighbouring villages and towns when they need something, while forced to walk across rugged mountainous paths tiring for their body and age.

Abu Mahmoud, 61 years old, lives with his wife and his two sons who suffer from cerebral atrophy in a camp in the village of Salwa, north of Idlib. Every day, he has to go from his camp to the village, which is about a kilometre far from the camp, via his motorcycle. He talks about his suffering: "At this age, it is not easy for me to ride a motorcycle, especially since all my path is mountainous, and every day I have to go out and buy food and household items, so I always suffer from back and joint pain because of riding the motorcycle."

The high cost of living, and high prices are among the reasons that affect the provision of the needs of the elderly people in the camps by the people who care for them.

Samer Al-Sawadah, who lives in a camp near the town of Tal Adeh, west of Aleppo, takes care of his 65-year-old father, but after his displacement, his living condition has changed even for his father. After he was able to provide his father with all the medicine and healthy food he needs, he became unable to do so today. "Now with the lack of job opportunities, I feel sad, because I am forced to provide him with Turkish medicines, which are sometimes distributed for free, and also I cannot provide him with suitable food," said Samer with great sadness.

Although displacement was tough on everyone, its greatest impact was apparent on the elderly and people with special needs, as they had to adapt themselves to a new reality that was completely incompatible with their health conditions and needs, during economic conditions that do not help to improve this reality.