After the Outbreak of Cholera.. Wastewater Pollutes the Efrin River 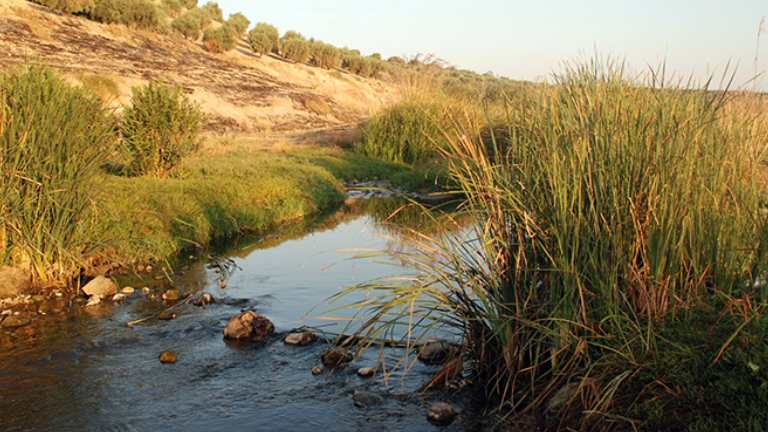 The residents of the city of Efrin and its surroundings complain about the pollution of the river water that passes through the city, due to connecting some of the sewage channels of the city and the surrounding villages and camps to the river. This has caused many problems for the residents who reside near the river, besides a state of fear among the population of the possibility of increasing the number of people infected with cholera as a result of this pollution.


Pollution of the River and the Fears of Residents

The river water in the city of Efrin became black after it was mixed with sewage from some neighbourhoods of the city and the surrounding camps.

Hamza al-Dulaimi, a resident of the city, told Rozana about the causes behind water pollution, he said: "About two years ago, the situation was not like this, today, all sewage water flows into the river due to violations by the Local Council, which sees the reality and does not take an action to solve the problem. The pollution in the Efrin region is due to diverting the sewage channels of the Ashrafieh neighbourhood in the city to the river, consequently, the water has been polluted from the city of Efrin to the village of Ain Dara".

Al-Dulaimi says that the areas that the river passes through are all agricultural areas, and the farmers depend on this river water to irrigate their crops, thus leading to the pollution of the crops that the people buy and eat while the region is recording an increasing number of cholera cases.

Al-Dulaimi called on the Local Council and the Health Directorate in the city of Efrin to develop solutions to this problem and to purify the river's water by digging special holes for sewage water in the city and the neighbouring camps.

Most of the farmers in the areas located on the banks of the river depend on irrigating their crops from river water, and thus the crops are polluted with this water.

Khalil Khalil, a farmer from the area, told Rozana about the reasons for his relying on the river's water to irrigate his crops, he said: "as farmers in this area, we depend on the water of the Efrin River to irrigate our crops, due to the availability of the running water, and because we are unable to dig water wells for the time being, or to secure water from other sources due to the high costs of this process".

The people and residents of the Efrin region are worried about irrigating crops with the polluted river water, they no longer trust the vegetables they buy from the markets, and they fear that these vegetables were irrigated with that water.

Faisal Al-Hamoush, a city resident, is confused when he buys vegetables and fruits for his family because he does not know their source and fears that they were irrigated with polluted water from theEfrin River. He describes his condition to Rozana by saying: "We buy the vegetables from the wholesale market of the city and we cannot specify their source, because the farmer brings his crop after harvesting it to the wholesale market without stating its source, so we are confused about the source".

Spread of Insects and Skin Diseases

The pollution of the river water, after it converted to a sewage swamp, caused a large spread of insects, which led to the emergence of several cases of skin diseases in the areas adjacent to the river.

Ahmed Aqil, a city resident, told Rozana about their suffering from the insects that spread due to the river. He said: "Flies and mosquitoes are widespread in the area and when a mosquito just stands on the child’s body, he immediately gets skin allergy, not to mention the spread of other several skin diseases".

While Ahmed al-Samar, one of the residents of Al-Tal camp near the river, says: "We sometimes use the river water to wash our clothes or take a shower when the water is cut off in the camp, which caused many skin diseases in the camp, and they particularly appeared in children such as pimples, skin allergies and severe itching".

While we were preparing this report, we contacted the Civil Defense in the region to discuss the possible solutions to end this pollution and its negative effects on the lives of the residents. The Civil Defense replied that it was unable to completely clean the river, and its work is limited to cleaning specific areas only, in addition to implementing awareness campaigns about the danger of the polluted water.

The Director of the Health Directorate in Efrin, Dr. Ahmed Haji Hassan, spoke to Rozana about the difficulty to solve the problem, and about their exerted efforts, he said: "The situation is catastrophic, especially with the spread of cholera, and we noticed the seriousness of the issue after the increase in the number of cholera cases in the Mahmudiyah and Der Ballout camps near the Jindires town. This happened because we were unable to reach these areas recently, and provide them with water sterilisation materials due to the recent factional fighting in the area".

"After the beginning of recording cholera cases, we, the Health Directorate, have established awareness teams in the city of Efrin, teams for taking stool sampling, and teams for providing chlorine for sterilisation. We started our work in the camps, in addition to publishing information about the disease, its danger and the methods of prevention on our official pages on the social media platforms." Haji Hassan added.

When we asked him about possible solutions to stop the current pollution, he said, "I expect that the issue is currently difficult, and the current action is limited to awareness activities in the areas adjacent to the river, because the complete cleaning of the river is difficult now. We, as local councils and health directorates, strive today to deliver clean water to the population in the areas served by the Water Establishment, and in areas that depend on wells, we take water samples, analyse them, and ensure their safety, in addition to distributing chlorine material".

The absence of radical solutions for the problem could increase the percentage of water pollution, and thus increase the risks emanating from this pollution, at a time when the Early Warning Alert and Response Network (EWARN) recorded on the 23rd of this month 404 new suspected cases of cholera, 16 of which were in the Efrin region.