Syria's Winter: The Rich Feel Warm and the Poor Have Cow Dung Only 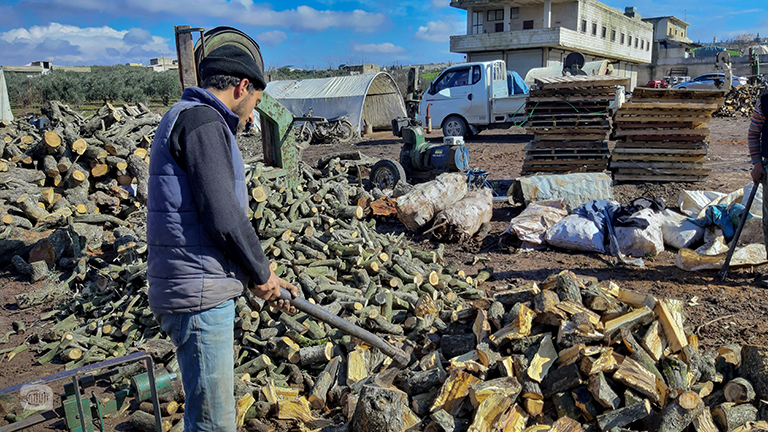 The Syrians who reside in the regime-controlled areas today live a miserable life, where they started a new task by the beginning of the winter. There is no way to get some warmth with the rationing of diesel, which started to be distributed at a rate of 50 litres per family, a quantity not enough for more than three days in the cold regions, and could be up to a week in less cold regions.


Due to the large availability of diesel, and its abundance in the black market, but at very high prices reaching 120 thousand pounds per 20 litres, which can be increased with the advent of the winter season, the well-to-do and warlords who do not care about spending several million pounds to get warmth for themselves and for their families, while the poor of the Syrian people are deprived of this warmth.

The Return to the Old Methods

Some began to return to the old methods of heating, such as using olive kernel (olive mill pomace) which is produced from the remains of the olive fruit after its pressing, as well as cow dung after drying it, in addition to firewood in case some managed to obtain it away from the eyes of scrutiny, and finally they resorted to a new innovative method which is using the used engine oil.

Most of those who adopt this method resides in As Suwayda, Hama and Homs, specifically in rural areas where cow breeding is widespread. They keep cow dung throughout the summer and form it into large disks, then dry it under the sun and store it for winter, they call these pieces "jalla".

About two years ago, Nazha, a seventy-year-old woman from the villages of the border strip with Lebanon in the Homs countryside returned to this old custom, taking advantage of what she had learned when she was a young girl of preparing "jalla" with her mother.

The seventy years woman says that at the beginning of summer she stops selling the dung of the three cows that the family has. After that, she starts to collect it, mix it with the straw of the dry leaves, and then shape it according to certain sizes that can be inserted into the heater hole, after the end of this process, she put the produced pieces under sunlight to be completely dry then collect and store them for winter.

Nazha emphasizes the need to dry the pieces well since before returning to this old method, they inquired about its risks, and they were told by the guidance unit in the village of the importance of exposing the pieces to the sun for a long time, to make sure that they were completely dry, to avoid any risks to health when they are burned.

An agricultural engineer, who preferred not to reveal his name, says that this method of heating is no longer healthy. In the past, the homes of the ancestors were open and well-ventilated, unlike today's concrete homes that lack good ventilation, and it is recommended to dry the dung pieces well.

Ayham, 62, (a pseudonym), a pulmonologist residing in Damascus, affirmed that this method is not healthy at all and is not recommended, but due to the current circumstances and the need for it, he emphasizes that certain procedures must be followed upon using this method.

These procedures include making sure that the heater door is tightly closed immediately after placing the dung inside and leaving the window partially open throughout the day even after turning off the heater. He says that it is not recommended under any circumstances to sleep in the same room in which the heater is located, and children must be away from it with preventing them to sit long in the room.

If these procedures are not applied or ignored, the risks will be great, such as respiratory infections and other infections in the eyes, and this will increase the suffering of patients with respiratory diseases such as asthma and in some cases, it may reach the extent of death. The same applies to the use of firewood for heating, where the same preventive guidance mentioned above must be followed.

In 2015, the Syrian regime's "SANA" agency reported that three children, aged 14 to 18, in the Bustan al-Dour neighbourhood in the capital, Damascus, died because they slept in the same room that contain a wood-burning heater without opening the windows, which caused their suffocation and death.

Social media followers also talked about several similar deaths that took place in the governorates of Lattakia, Tartous and Homs, last year, without official documentation or the issuing of special statements about these incidents.

This method of heating is widespread in the governorates that have olive crops, such as the Syrian coast in the first place. And it is an acceptable and reliable alternative to provide heating for homes, especially since it is flammable due to the rate of oil that it contains.

Mahmoud, 39, a government employee from the Tartous countryside, said that after pressing olives in the oil mills, they get the remains of the pressing process, which are locally called "Tamz" and are known in the rest of the governorates as Byrain (olive mill pomace), and it consists of the peel and the kernel of the olives, in addition to some oil that remained them.

In the past, Mahmoud did not care about these remnants, but today, with the loss of all the usual traditional heating methods, the return to the methods of the ancients became necessary, where the "Tamz" is formed in the form of circled pieces and exposed to air until it dries and then stored until it is used in winter.

Recently, some shops have started selling the "Tamz" of olive trees to city residents who do not have agricultural lands containing olives and do not have any means of heating with fuel or electricity.

Last year, Balsam (29 years old), who lives in the city of Lattakia, bought "Tamz" and tried it for the first time, the price of the big piece was 1500 Syrian pounds, and it suffices for about five hours of heating. This year, she is thinking of repeating the experiment, especially since it is much cheaper than buying diesel or gas, she says: "We do not know its prices this year yet, but the seller told me that the price of the big piece will range between 3 to 4 thousand pounds, and they are waiting for the mills to finish to determine the price."

According to doctor Ayham (a pseudonym), the risks of "Tamz" are slightly less than the risks of firewood and cow dung, but they exist and the same advice must be followed when using it.

Firewood Is Out of Accounts

Heating through wood is no longer available to the poor, where the price of a ton of wood ranges between 450 and 650 thousand pounds, depending on its type, and it could rise more as we advance in time towards winter. Bearing in mind that one ton does not suffice the family for a period of more than one month, no matter how much the savings rate is.

Hussam (45 years old) and one of the firewood workers in the Tartous countryside attribute the reason to the increase in the demand for firewood by the owners of villas and farms, whether from Lattakia or from outside, who own a stove (chimney) that needs a lot of firewood to keep working, so, the firewood became not accessible by poor.

Some people started using a new method in cities where they buy used car oil from car washes and put it in the heater instead of diesel. Nadim, 34, says that he tried this method last year and got the oil free of charge from his friend the first time, and after the success of the experiment, he returned to buy each kilo for 1500 pounds, which is a great alternative to diesel, in his opinion, but it causes quick damage to the heater, and he affirms that he will repeat the experiment this year.

Others rely on hot water bags, woollen blankets, and wearing more clothes, and there are no more options in search of warmth for the majority of Syrians this winter, which does not seem to be kinder than the previous one.

This mentioned reality is a small part of what the Syrians are suffering today, and it may answer the question: Why do the Syrians risks through the death boats in search of immigration? It is because life and death are completely the same for them.