"The Forgotten" .. Al-Rukban Camp is Left Alone to Face its Fate 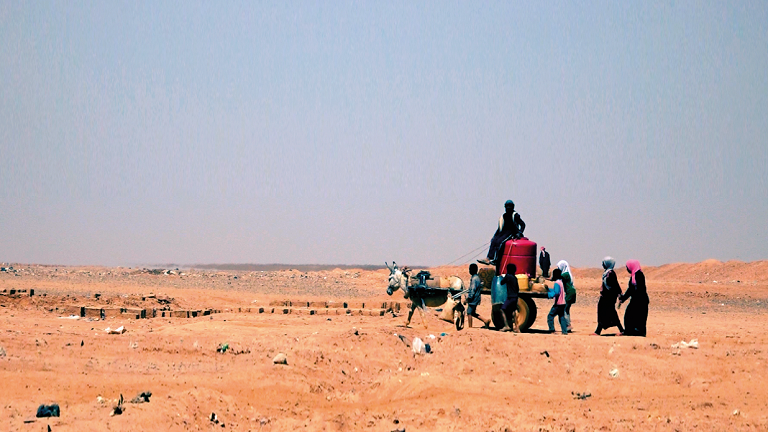 "The Forgotten" is a description of the residents of Al-Rukban camp located at the Syrian-Jordanian-Iraqi border, who suffer tragic humanitarian conditions, especially after water scarcity and the shortage of medical services, while temperatures exceeded 40 degrees in the desert area.


In conjunction with an electronic advocacy campaign under the hashtag "Save Al-Rukban Camp", the program of "Voice of People" program raised the following question: Why the camp is left alone to confront its fate without international or local intervention? Is there a possibility to find a radical solution that will end suffering?

10 thousand civilians are besieged and threatened with mass death

Journalist Mohammad Hassan al-Ayed said, during a video recorded participation, that the camp has been besieged for three months. He added: "Any materials needed by the residents of the camp, such as food, medicine, and others, are prevented to enter." He noted that the entry date of the last UN relief convoy was 2019, and it was the "first and the last convoy."

He added that the Jordanian government prevents aid from entering the camp through its territory. It also refuses to enter patients and critical emergency cases.

Al-Rukban camp is inhabited by about 10,000 civilians, they mainly came from the countryside of Raqqa, Deir ez-Zur and Homs. Mohammad Al-Ayed confirms that they are threatened with mass death if the siege against them is not lifted.

The conditions of the people stuck in the camp have deteriorated since Jordan declared mid-2016 its borders with Syria and Iraq as a closed military zone. The situation worsened after the outbreak of the Covid-19 pandemic. Al-Rukban camp is located within a security zone with a diameter of 55 kilometres that was established by the International Coalition, in which it established At Tanf military base.

"Everyone let them down", Syrians have to support the camp

Mohammad al-Ayed held the Syrian regime and Iranian militias responsible for the blockade against civilians after they are "attempting to control At Tanf area since it is considered a strategically important of the dawn-3 project that aims at controlling the entire area from Tehran to Beirut including the Syrian territory and the capital Damascus."

Al-Ayed pointed out that the residents of the camp are afraid of being arrested and prosecuted if they return to the areas from which they migrated, which are located under the control of the Syrian regime and the Iranian militias that backs it.

"Everyone has let them down. The displaced people who are looking for safety are paying the price alone. Even the Syrian opposition establishments, such as the National Coalition of Syrian Revolutionary and Opposition Forces and others have turned their backs on them because the file appears to be reconciled after an international consensus." Al-Ayed said.

He concluded his participation by confirming that Syrians must support the displaced people of Al-Rukban, in which no humanitarian organizations are operating. "Urgent relief must be provided as an initial interim solution guaranteed by the UN on the human right to obtaining food and the right of a decent life until reaching a radical solution or transport them to northern Syria under an international protection".

Syrians who live in the Al-Rukban camp have accused the United Nations of failing to support them with humanitarian aid for years, while the international community recently provided more than 6 billion euros as support to the Syrians during the Donors Conference in Brussels.

Syrians from Idlib: Campaigns will not change the reality of the Al-Rukban camp

In a video report of the "Voice of People" programme in Idlib, Syrians questioned the benefit of electronic campaigns to advocate the Al-Rukban camp and their ability to change its reality, "It is an international issue that is beyond our ability to influence it."

The majority of opinions in the report were unanimous on "the international betrayal of the residents of the camp along with the Syrian people (...), the Arab States do not help them (...) Who will lift the blockade imposed against them Iran, Russia or Jordan? ". Meanwhile, others denounced the position of the international coalition "The United States and the United Kingdom", which supports the military base located near the camp and neglects the Syrians within it.

Likewise, the result of the answer to the episode's question posted on Rozana's Facebook page indicated that 63 per cent of those who participated believed that the Al-Rukban camp was truly left alone without intervention to save it.