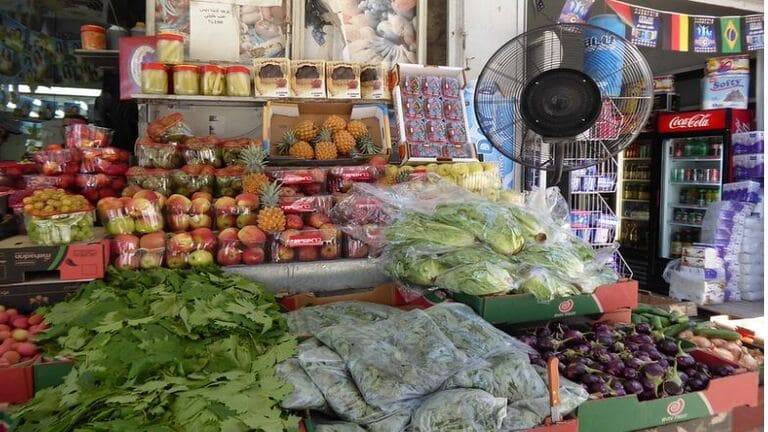 The preparation of winter food reserves in Syria has become a risk that is likely doomed to fail, especially with the continuing government promises to improve electricity.


Maryam, 46, hard managed to obtain a specific amount during months through the so-called "Gamia" (financial cooperation) for the preparation of winter food reserves, however, they were later put in the garbage instead of the fridge.

Maryam, who resides in Damascus, participated with her co-workers in financial cooperation. She was keen that her turn to receive the amount at the beginning of May, so, she took a risk and bought (10 kilos of a peeled pea at SYP 60,000, 5 kilos of grape leaves at SYP 50,000, and 10 kilos of beans at SYP 50,000) after the electricity status witnessed a significant improvement that month, according to her.

But the deterioration of the electricity situation and its outage for more than 5 hours forced her to throw these quantities in the garbage, she says: "I learned a good lesson, and I will never try this again."

The forty years old woman said: "It is like I threw SYP 160,000 on the ground, they deceived us and did not connect the electricity."

Maryam's failed experience in preparing food reserves is not the only one. There are many other Syrians who lost hundreds of thousands of Syrian pounds in various governorates due to the rottenness of food reserves as a result of the constant electricity outages.

A problem aroused between Afaf and her husband due to the food reserves, as he did not agree from the beginning to buy them because he was aware of the electricity situation. "He was certain of that end."

Afaf says: "I hardly collected the money for the food reserves, and once again my heart broke when I threw them in the garbage, and its musty smell spread throughout the kitchen."

With the beginning of the summer, areas of the Syrian regime are witnessing an increase in the number of hours of electricity rationing, as the hours of electricity outages reached about 10 hours in the capital, Damascus, and about 12 hours in Damascus countryside while it is connected to half an hour only.

Officials in the Ministry of Electricity attributed the reasons for the sharp decline in energy supply to the stopping of operating of some generation turbines in Baniyas and Tishreen stations due to the lack of gas quantities needed to operate the generators, according to the "Athr Press" local website.

The week of Beans and Pea

In order not to lose the food reserves that cost her more than SYP 200,000 (pea, beans and grape leaves), she cooked part of them within a short period and distributed the other part to her neighbors and friends.

She says: "I started cooking the vegetables of food reserves, and for a whole week, we only ate pea or beans. I cooked fried beans in oil, "beans maqluba", "pea maqluba", and pea and vegetable soup, to the extent that I started to believe that my family will not miss these foods until the next season."

As for the grape leaves, Somaya says that she applied the advice of one of her friends, and pickled the leaves in salted water. However, she does not know yet whether her trick has succeeded or whether the grape leaves, which she paid their price depending on a foreign transfer from her daughter in Sweden, will be ended up in the garbage.

A new adventure to the garbage

Faten, 42, an employee in the city of Jableh in Latakia Governorate, thought that she was wiser than her colleagues, and decided to conduct a new experiment to save food reserves that she had watched through one of the popular videos on Facebook, but part of the experience also ended catastrophically.

Faten says that she decided to completely abandon the refrigerator for storing food reserves. She bought (10 kilos of pea at SYP 25,000, and 5 kilos of beans at SYP 10,000) and used the method of dehydrating and drying half the quantity. While she conducted a method she watched on the internet, which depends on preserving vegetables with sweet water by drawing air from them. However, it was a failed method, and what she dehydrated remains for her, hoping that this quantity will be better when she uses it next winter.

Latakia is also witnessing long hours of electrical rationing reaching about 23 hours, with an hour of power connection only per day, according to media reports.

Although the option of pickling is not preferable for a large category of women, they become forced to do so to preserve winter food.

Souhail, 52, is a government employee in the city of Homs. She adopted the method of pickling and stored 7 kilos of grape leaves she bought at SYP 70,000. She says: "The flavour of pickling remains in vegetables, and it does not vanish after cooking, but pickling remains the most successful process for us, we, who do not see electricity only in the promises of those responsible for it."

No food reserves this year

A large category of Syrians did not prepare food reserves this year, where the majority of them live according to the principle of "every day is separate", especially after the high prices and the low living conditions, where more than 90 percent of Syrians suffer from poverty, according to the United Nations.

A few days ago, the Ministry of Electricity of the Syrian regime's government announced a malfunction that resulted in a general power outage in the regime's areas. Syrians in various governorates complained of a prolonged power outage that coincided with a water cut-off.

At the beginning of this month, the government of the Syrian regime stopped the production of diesel and fuel from the Baniyas Refinery in Tartus‎ Governorate, due to the loss of crude oil, coinciding with the shortage of gasoline and diesel fuel at the gas stations in the country.

In the middle of last January, the head of the government of the regime, Hussein Arnous, promised to improve the situation of electricity, saying that the second half of the year will witness breakthroughs in the field of electrical services by increasing generating capacities on the one hand, and providing more quantities of fuel and gas needed to operate more available generating capacities, in light of the continued promises to improve the service and living conditions of the regime's areas without any progress.