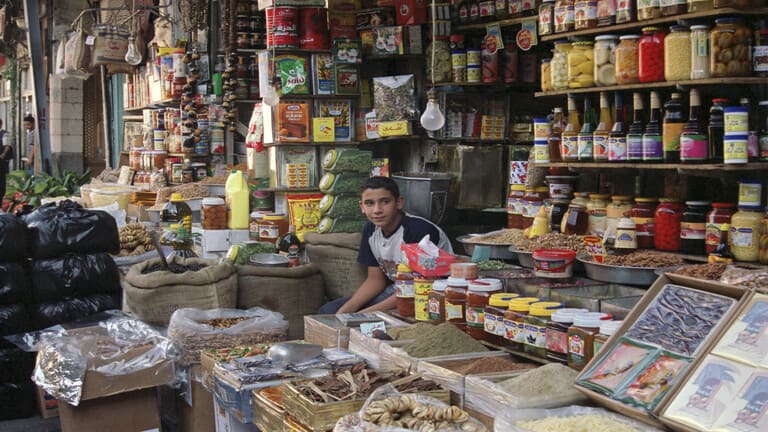 Marwa (45 years old) from the city of Jableh resorts to a new purchasing system, she buys half a glass of vegetable oil or a little amount of rice that does not exceed an ounce, according to the amount of money she has and not according to the usual weights for buying such as kilo or half a kilo.


Marwa is a housewife and mother of two young children. Her husband works as a government employee. She used to visit "Samman" (food store) to buy rice at SYP 2,000, vermicelli at SYP 500, and perhaps half a glass of vegetable oil to be able to cook a plate of rice alongside the potato soup, which lacks any additives such as meat or chicken.

The forty-year-old woman lives in a village near the Russian Hmeimim Air Base where many shops are located near it, and they sell "everything you need” as she put it.

She feels anxiety and has a painful feeling when she looks at these various products such as chocolate, meat, cheese, and dairy, while she cannot even think of approaching them or asking about their price. These shops are often dedicated to Russian soldiers who receive high salaries and can buy "whatever they please to buy".

Throughout the Syrian governorates, there are many like Marwa. In Tartus‎ governorate, Lamis who is a 35-year-old government employee only buys a few vegetables as ingredients for one salad plate, such as two cucumbers, two tomatoes, and a bunch of parsley with a price amount of SYP 3,000, as she put it.

Buying according to one piece, or one cup, or according to a specific amount, has become today a system that is increasing for many, day after day, with the continued deterioration of living conditions in Syria.

The percentage of Syrians living below the poverty line is more than 90 percent of the total population, according to an estimation by Martin Griffiths, the United Nations Under-Secretary-General for Humanitarian Affairs during a session of the UN Security Council in October 2021.

The dollar exchange rate in the black market is about 4 thousand Syrian pounds, which highly raised prices in markets, especially during the last two years after the outbreak of the Covid-19 pandemic, and recently the Russian war in Ukraine. Where the average cost of living for a Syrian family consisting of 5 persons reached more than two million Syrian pounds per month, according to a study published by the "Kassioun" newspaper.

The phenomenon of buying according to one piece and a quantity of one glass began nearly a year and a half ago, according to Omar (62 years old), the owner of a food store on the outskirts of the capital, Damascus.

Omar says: Customers used to buy some types of expensive fruits according to piece, and often they buy them for their children in order not to be deprived of them.

With the continued increase in prices, the phenomenon of buying in one piece also extended to include vegetables. The sixty-year-old seller says: "With the recent increase in grain prices, and about two months ago, customers began to ask shyly to buy a little quantity of rice or sugar, at first I refused, but with repeated requests, I responded to that".

In front of his shop, Omar put bags of one-kilogram weight that contain rice, sugar, lentils, bulgur, and chickpeas. Then, he sells from them according to the customer's request, either for an amount of one thousand or two thousand or more.

The same applies to oils and margarine, according to Omar, customers buy their need of margarine or oil, at a rate ranging from one thousand to two thousand Syrian pounds, and sometimes some buy only with SYP 500.

"The amount of SYP 500 does not buy more than a quantity of a spoon, and certainly the poverty is the reason that pushed them to buy with this amount, so I pledged to myself to increase the quantity whenever I can, and Allah may help us," Omar said.

What does an employee's salary buy in Syria?

"The spread of this phenomenon in Syria might have been a good matter if it was not compulsory," says Lamia, 38, an engineer and government employee residing in Damascus.

The architect, who used to buy bulgur and rice for storing in large quantities less than two years ago, has now joined the people who buy through a quantity of one glass.

"I have been working in my government job for more than 11 years, and my salary along with allowances does not exceed SYP 122,000 (about $30), so how can my salary be enough to buy 4 kilos of sugar at SYP 4000 per kilo, and 5 kilos of rice at SYP 4,500 per kilo, and then how it will be enough for my transportation costs?" Lamia added.

Lamia is a mother of two young children, she is responsible for their living because she lost her husband in the war, and she does not have any information about him since his absence nearly 5 years ago.

She asserts that her salary is not enough even if she decided to eat only eggs with her children for the whole month, she says: "If we eat 3 eggs for breakfast and the same for lunch and dinner, which means nine eggs per day, the price of each egg is SYP 500, which means SYP 4500 per day, and SYP 135000 per month. Can you imagine that I am talking about eggs without any other additives?"

The salary of an employee in the government sector is sufficient for the food designated for two days only, which means for meals of breakfast, lunch, and dinner. This is for the time being, however, in the upcoming days with the expectations of a new price increase, after raising the price of gasoline in the last period, the salary may not be enough for more than one meal a day.

The difficult living conditions in Syria have led to a major change in the nutrition and living habits of the Syrians, where most of them used to buy for the needs of their families, on a monthly or semi-annual basis, unlike today, when nutrition habits became limited to the method of "day to day".

On a day when there is not enough money to buy a quantity of a glass of rice and half a glass of lentils, there is often no food in the home, and the residents of the house have to sleep hungry, and this is not an exaggeration, but rather it is the reality of the situation that the people within Syria are well aware of.