Private Lessons ... an Hour Price is Less Than the Price of Half a Chicken! 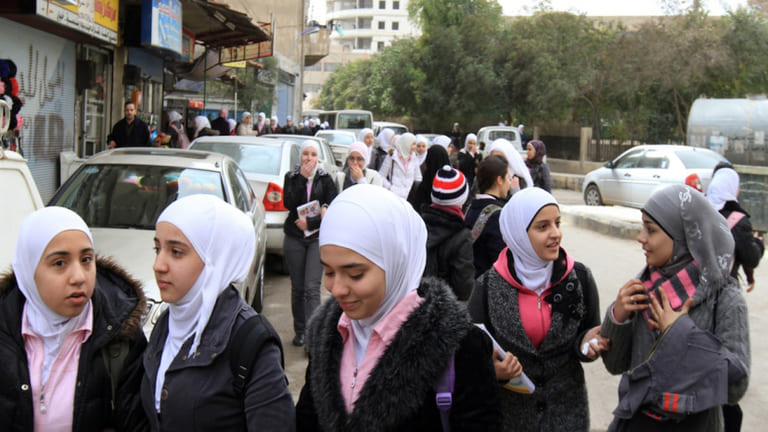 Malak (47 years) paid millions of Syrian pounds for providing private lessons to her daughter, Layah, who is preparing for her high school exams in Syria at the end of May.


Malak, an engineer who works in the governmental sector in Damascus, was forced recently to sell her "wedding ring", which is the last gold piece she owns, to ensure the continuity of her daughter's private lessons.

"Since the beginning of last summer up till now, I have paid more than 3 million Syrian pounds to ensure that Layah gets grades to qualify her to enter one of the scientific disciplines, these disciplines that guarantee the future." Said Malak.

Layah needs 169,000 Syrian pounds per week as the price of (one math class, one physics class, one chemistry class, and one English class), while the price of the one class is witnessing an accelerated rise.

The private lessons market in the capital Damascus is witnessing a dramatic rise that almost exceeds the rise in the dollar exchange rate against the Syrian pound. A matter attributed by teachers, which Rozana met, to the high increase of prices lately, especially transportation costs, which has led to an increase in the cost of private lessons.

Private Lessons as an Additional Income

The salaries of employees, especially teachers, are barely sufficient for a few days of the month. Therefore, they are forced to resort to private lessons to secure their living. Especially at a time when the average cost of living for a Syrian family consisting of 5 members has reached more than two million Syrian pounds per month, according to a study published by the "Kassioun" newspaper.

A mathematics teacher in Damascus, who preferred not to reveal his name, said that his government salary of about 160,000 Syrian pounds is not sufficient even for 10% of his family's needs, so resorting to private lessons is not an option, but rather a mandatory necessity, especially he does not know practicing another job in his life except teaching.

He added: "The student can't comprehend the lessons in public schools, due to the overcrowding of the classes, which exceeds 60 male and female students, and in best cases, they encompass 30 students, so private lessons are no longer an option even for the students’ families."

Despite the poor financial situation, private lessons are a necessity

Huda, a 52-year-old government employee from Latakia, agrees with the teacher’s viewpoint. She says that her son, who is studying for the scientific branch of the baccalaureate exam, cannot comprehend the huge curriculum, so he resorted to private lessons since the beginning of the year, for some basic subjects such as mathematics, physics, and chemistry at the rate of two lessons weekly for each subject, due to the bad financial conditions.

One million and 800 thousand pounds is the total amount Huda has paid since the beginning of the school year for private lessons for her son.

While the minimum cost of private lessons in the popular neighborhoods was 8,000 for mathematics, 7,000 for Arabic, and the same for science, physics, chemistry, and languages.

In the countryside, the situation is not better. In one countryside that is about 25 kilometers far from the city of Latakia, the hourly wage for mathematics was 14,000 pounds, for science 9,000 pounds, and 13,000 pounds for chemistry and physics.

Tricks to cope with the expensive private lessons
Some parents make tricks to lower the cost of private lessons. Majd, 49, says: “two or more students agree to attend the lesson and share its cost.”

"I agreed with a teacher that my son would share the cost of the class with another student, in this way, I pay 9,000 pounds instead of 18,000. I do the same for the rest of the subjects," added Majd, who resorted to this trick after a suggestion by the teacher to reduce costs.

An Arabic language female teacher says she cannot receive less than 8,000 pounds per hour, which she sees as an unfair amount. According to her, it is not reasonable to deprive her family of her existence at this hour to receive an amount less than that. Knowing that this money, as she says, does not buy her half a chicken.

In Tartus‎, different prices for rich and poor people

Private lesson prices in Tartus seem somewhat similar to those in the neighboring governorate of Latakia. According to a survey conducted by Rozana, many teachers turned their homes into what looked like private institutes to be away from the eyes of the censors.

The single class often contains more than 4 students, each one of them paying 7,000 pounds, as the system applied to one of the physics teachers. The teacher, who preferred not to reveal his name, said that the class here does not mean an hour as usual, but it is an hour and a half, and its cost is shared between the students.

The prices of private lessons are very variable in Tartus. Where the cost depends on the name and reputation of the teacher, as well as the place of residence of the students, whether they live in a popular or wealthy neighborhood, the work nature of their families, and whether they are rich or not. The rates often range from 3,000 to 25,000 pounds per class.

One female teacher, who preferred not to reveal her name, says that she finds nothing wrong with asking a student for a large sum of money, up to 20,000 pounds for one mathematics class, if she knows that the student is wealthy. Whereas she lowers the price to 7,000 pounds if she knows that the student does not come from a wealthy family. She confirms that she sets the rates in a "humane way".

She says that the number of weekly classes depends on how well the students comprehend and respond to the explanation given to them. Sometimes one class is sufficient for some students, while others have to attend three or four classes per week.

Memorization of subjects: worth 300 thousand pounds

The situation in the Tartus governorate is differing from Latakia and Damascus, where what is called memorization of subjects is spread. It is a matter more spread within the literary branch, where the male or female teacher supervises the student's memorization of all his lessons daily and even before the exam, for a monthly wage ranging from 100 to 300 thousand pounds depending on the reputation of the teacher and the student's ability to pay.

One female teacher says she chose to receive 175 thousand pounds per student. Where she starts with the students from the beginning of the school year and supports the student to memorize the subjects word by word daily." She said: "We compensate for the low wages with private lessons."

A large category of students was not able to attend private lessons this year due to the deteriorated financial situation of the majority of Syrians. Unfortunately, the enormity of the curriculum and the bad conditions in the overcrowded classes may deprive them of achieving their dreams simply because they do not have enough money to hire a teacher to explain to them what they could not understand during the school year.

During a session of the UN Security Council in October 2021, the UN Under-Secretary-General for Humanitarian Affairs Martin Griffiths estimated the number of Syrians living below the poverty line at more than 90 percent of the total population.