"I Dare not Declare My Profession": The Suffering of the Independent Journalists in Syria 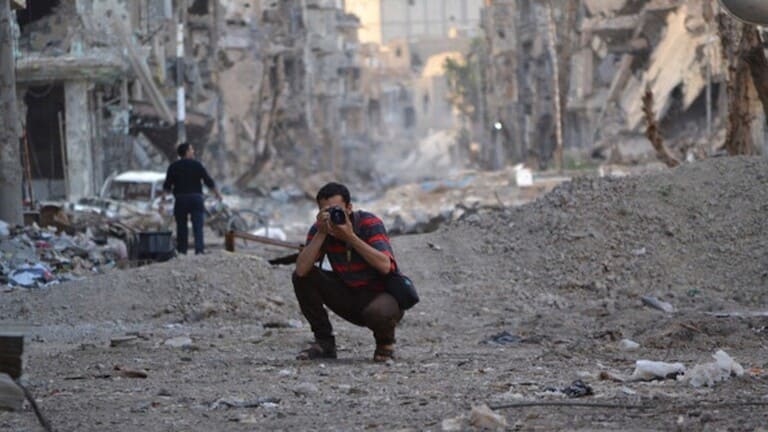 At a cafe table, I and my friends exchange jokes about our pseudonyms, through which we publish our articles and press reports. Some chose a strange name, and another one chose a name that you cannot determine its gender, whether a man or a woman. As for me, I chose a name that I like, while the surname was the name of a protagonist of a novel I read before.


At first glance, it seemed funny, but we gradually realized how much it costs to be an independent journalist within or outside Syria, it costs us to waiver our identities in exchange for not losing our lives.

"I never dared to declare my profession, especially to strangers, and I merely claimed that I was a university student. My childhood features helped me that they believed my claim, although I was over 30 years old," says Karmin Karim (a pseudonym for a journalist). When public drivers ask her about her profession, as their usual curiosity, she replies that she is a university student because she fears drivers.

Many soldiers or secret service agents work as drivers of public cars as an additional job. It was not easy for her to hide her truth, but she knows that the phrase "I work as a journalist" is serious since the next question will inevitably be: "What is the party you work with?" It is dangerous to mention the external websites or the opposition that you work with.

Karmin wrote dozens of articles, reports, and investigations under her pseudonym, or without even putting her name on it. She says: "Sometimes I feel like all my efforts are in vain. I cannot even write my name on articles and investigations for which I spent a lot of time and effort."

Karmin applies careful security measures to protect her accounts in order not to leave any signs of her articles on her laptop in case she is being arrested. After sending the article or the investigation, she immediately deletes it from her laptop. All of these measures expose her to constant anxiety, and because of that, she suffers from insomnia and panic attacks.

A press that "does not criticize"

These are not the only difficulties that independent journalists face in Syria. If the journalists are not affiliated with the press of the regime, this means that they cannot obtain a journalist card that helps them during their research and movements to conduct official interviews.

Sometimes it is not enough to introduce yourself as a journalist without mentioning the party you work with and showing your press card, especially in light of the security restrictions at the checkpoints. Moreover, to be able to enter some areas to conduct interviews requires an official permit.

Hazem (a pseudonym) says: "Journalists within Syria are forced to discuss ideas superficially because they are unable to access sources or conduct interviews with officials."

According to Hazem, the problem is greater, where the disclosure of corruption files may threaten the safety of journalists, which has already been experienced by journalists affiliated with the regime. Where the Syrian regime prosecuted journalist Kenan Waqaf, who is considered to be affiliated with the Assad regime because he disclosed corruption files and criticized Bashar al-Assad. Nothing is known today about Kenan after he fled from Syrian security.

Hazem is subjected to the severe restrictions imposed on the press in general and the independent press in particular. He says: "We know that our stories are greater than the material we provide. There are names and files that we are unable to access. The Syrian regime is like a closed box in the face of those who want to uncover its truth."

As for Hala (a pseudonym), she writes in her real name. She says: "I adopt writing that 'does not criticize' as called by some people, which means it raises problems but does not dig into the causes. In fact, we got bored with the same topics that we contribute to presenting them, such as the electricity outage, absence of services, and the high prices. We have hundreds of investigations and interviews about that." All this led to presenting a similar genre of journalism from within Syria to some extent, which is not a weakness in the capacities of these journalists, but rather an indication of the regime's restrictions against them and the remarkable decline in press freedom under Assad's rule.

After the amendments to the new cybercrime law, independent journalists became targeted by the Syrian regime today. Dealing with foreign websites or Syrian opposition media is considered a charge in itself, regardless of the content they provide.

Most independent journalists work with these websites, and the lack of work permits is an additional problem. However, even if journalists protect themselves by using pseudonyms, the difficulties do not stop when it comes to the financial side.

Some of the parties that these journalists work with refuse to transfer amounts except through bank accounts in their names, however, bank transfers to and from Syria cannot be conducted due to the international sanctions. Even receiving transfers through specialized offices such as "Western Union" is a suspicious activity that may endanger the journalist.

The taxi drivers who work on the Beirut line or the friends who are coming from abroad for vacations are the only way for journalists to obtain their entitlements. Karmin says she receives her entitlements through one of the websites via a bank account belonging to her relative in Italy.

But this does not mean that the difficulties have ended since the exchange of amounts from US dollars to Syrian pounds means resorting to the black market. The Syrian regime had issued a law prohibiting dealing according to the rates of the black market, with a penalty of up to seven years in prison.

To be an independent journalist in Syria means that you may be exposed to danger at all times, where your personal computer may be proof of your conviction and your articles are a direct charge. In the context of the deteriorating economic situation and the lack of press freedom, the remaining journalists in Syria are fighting in an attempt to confront the regime by revealing its truth.