Sheep and goats are hungry in eastern Syria! 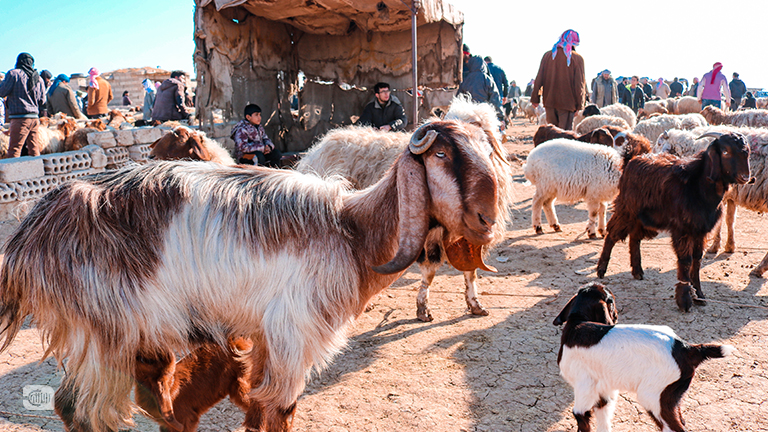 Ibrahim Al-Ali, a sheep breeder, had 50 sheep last year but today he has only 6 left, due to the drought crisis the country is witnessing. Grazing areas have dramatically decreased, while fodder prices have surged, and he became unable to buy them.


Sheep are declining in Raqqa

Ibrahim sells some of his sheep in the sheep market in Raqqa city to obtain the fodder price for the remaining number, although the high price of fodder, and after a while, he repeated the same thing.

“Fodders are expensive and the sheep price is cheap. We have cattle that died due to a shortage of fodders. I used to buy a ton of hay to feed them, but today, I can only buy 200 kilos and it is not enough. There is no revenue as before, we are just trying to feed the sheep,” Ibrahim said.

Sheep prices have dramatically plunged as a result of the drought.  In Raqqa, the price of one sheep is currently worth about SYP 200-300 thousand, while its price was about one million pounds last year. The price of a ton of hay, which was SYP 200 thousand a year ago has surged today to SYP one million and 200 thousand.

Is there any support?

Ibrahim tried to borrow fodders from traders, but he did not find anyone to lend him, since they know that he is unable to repay, he says: "The situation is disastrous, I have not received any support from any party, whether from the Autonomous Administration of North and East Syria (AANES) or organizations, in all countries of the world when a drought occurs, cattle breeders receive support, but this is not applied here."

As for Abdo al-Sawas, a sheep breeder, he received support from the "AANES" that governs the north-east of the country, but the quantity is insufficient, he says: "Every year, they grant us 15 kilos of bran per a sheep with a price of SYP 450 per kilo, but this is certainly not sufficient, since every one sheep needs at least half a kilo a day!" 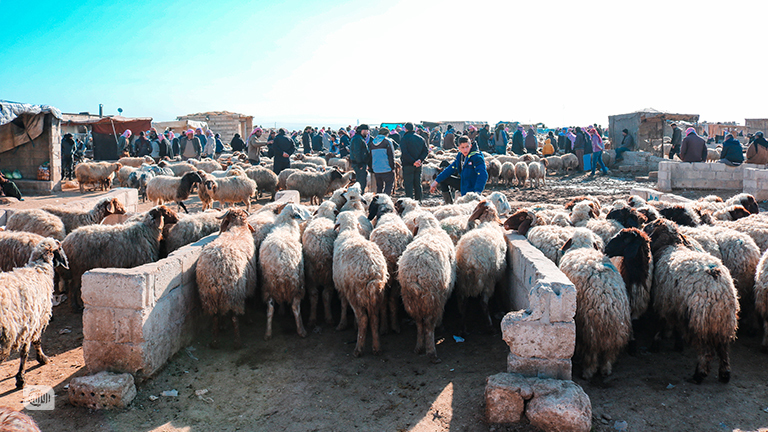 The situation of sheep breeders in Qamishli is not different from their counterparts in Raqqa. Ayed Al-Alush, a farmer from Qamishli, fears drought, he says: "If the drought continues, the destruction will be the fate of the countryside and cattle," as he put it.

Because of drought and malnutrition, diseases have spread among the sheep in Qamishli, according to Al-Alush, who also did not receive any support from any party.

He went on: "We experience tragic conditions; diseases have spread among sheep due to drought and hunger. Some people sell a sheep for SYP 100,000 before it dies to secure the price of bread for their children, and today all materials have become more expensive than cattle, you can imagine that the price of a bag of sugar is SYP 125 thousand the same price of a sheep.!"

A lot of debts accumulated on Al-Alush as a result of the current drought crisis, where he was forced to borrow from people to feed his sheep and secure living expenses.

Al-Alush criticized the "AANES" that sold him bran enough only for 25 sheep, while he has 50 sheep.

Deaths and abortions as a result of malnutrition

During the coming period, the numbers are likely to be decreased again as a result of abortions that occur to sheep that suffer from malnutrition, according to Fadi al-Khalaf, a veterinary assistant in Raqqa, he says: "Diseases have spread widely among sheep as a result of drought."

Fadi confirmed that there is a problem in sheep breeding this year, which is a matter that threatens the existence of livestock. He says: "The drought resulted in deterioration of the sheep's health. Malnutrition diseases have significantly worsened due to the high cost of fodder. While the breeders reduced the quantity of fodder for their sheep. So, this leads to malnutrition diseases and thus the death of sheep."

He indicated that many breeders have dispensed vitamins, amino acids, and dietary supplements found in medicines, as a result of their inability to purchase them. He says: "Since the breeder is unable to secure fodder, then how he can secure medicines. Therefore, breeders started not to give their sheep these necessary vitamins, which led to high rates of abortions." 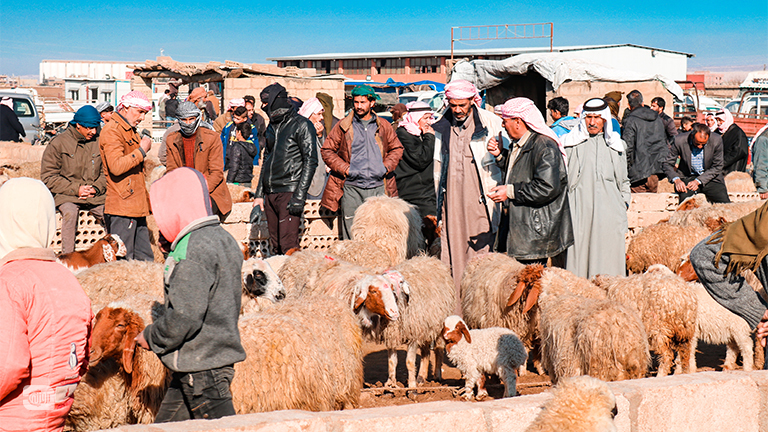 Stagnation in the markets

Noureddine Khalaf, a trader in the sheep market in Qamishli, talked about the stagnation of the markets, he says: "About 300 sheep are entered into the market daily, however, only 10-20 of which are sold."

The closure of the Semalka Border Crossing with Iraqi Kurdistan has negatively affected the buying and selling, as the Kurdistan Regional Government closed the Semalka crossing in mid-December last year after an attack against the crossing's employees by a group affiliated with the Democratic Union Party.

According to Khalaf, "cattle prices vary in the market, some people sell at cheap prices in order to secure the fodder price for the rest of his sheep. Of course, this is not a solution, even if you sell half of the sheep, you will not be able to buy fodder for the other half".

According to a statistic issued by the Directorate of Livestock in Al-Jazira Province "Al-Hasakah", the number of sheep last year amounted to one million and 200 thousand Syrian pounds, the Shami goats reached one and a half million, the male sheep and cows reached about 50 thousand, and buffaloes reached 4700.

Compared to a statistic issued in 2009 by the Directorate of Agriculture and Agrarian Reform in the regime’s government in Al-Hasakah, we notice a slight decrease in their numbers at that time, where the number of sheep was 1,536,170, and goats reached 175,214, while the number of cows was estimated at 83,579 at that time.

While in Raqqa, the Livestock Office there told Rozana that the number of sheep according to the 2021 statistic amounted to 1.5 million, Shami goats 54, cows 4,673, and camels 2,300.

We observe a significant decline in the number of sheep, which was estimated at two million and 900 thousand according to the 2007 statistics of the Directorate of Agriculture of the regime's government. 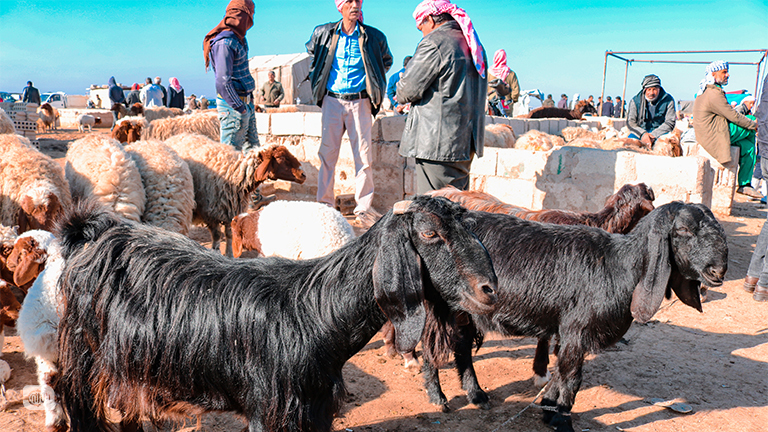 What does the Autonomous Administration of North and East Syria (AANES) do?

At the end of last year, the Livestock Office in Raqqa held a meeting with the "Development of the Agricultural Society and the Farmers' Union" company to form committees to handle the drought crisis and support livestock breeders.

These committees recommended providing bran to breeders at a "subsidized" price of SYP 450 per kilo. However, the breeders complain that the office provides them with limited and insufficient quantities.

Rozana conveyed these complaints to the Livestock Office in Raqqa, its director Munther Al-Saleh replied that "the AANES's capacities are limited, they do not have large quantities, and they are trying to reach all the breeders according to their ability".

Al-Saleh indicated that they are preparing a public establishment for fodder, in addition to a factory of fodder production in the Raqqa governorate, which will significantly help during the upcoming period. He said: "The drought has significantly impacted, and the support needs millions of dollars and enormous capabilities that are not available. For the time being, some organizations are providing support with fodder and medicine, but it does not cover all livestock. Each organization works according to its capabilities and provides support to a limited number of breeders".

Muhammad Kazem, head of the Directorate of Livestock in Qamishli, said that they provide the necessary vaccinations for livestock, besides supporting with fodder as in Raqqa. "We provide the necessary medicines and vaccinations for breeders, such FMD, blood, and smallpox vaccines, in addition to medicines for treatment such as antipyretics"، Kazem said.

Kazem expresses his optimism after the recent fall of snow and rain in Qamishli, he went on: "If more rain falls, the situation will be improved, sufficient pastures will be available, and fodders will be secured for the breeders at reasonable prices, and we will provide everything we can in favour of the breeders".