Syrians in Ramadan: The Lucky Person eats "Mujaddara", and the Wealthy Eats "Shakriya" 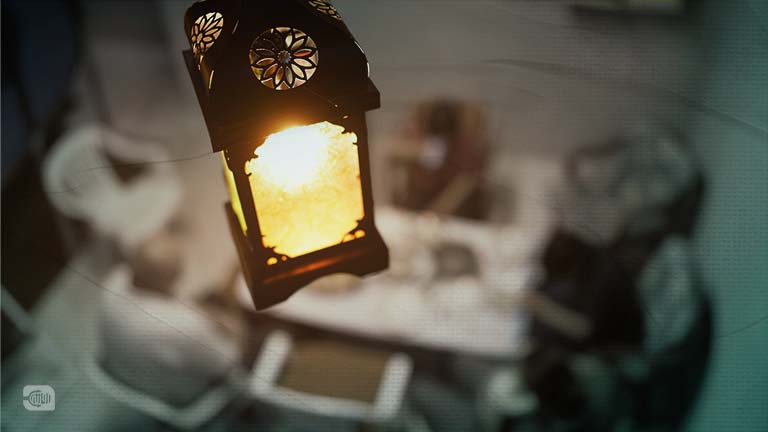 Sahar, 36, a housewife, does not think about changing her usual home strategy during the month of Ramadan, which is based on the principle of "on a day-to-day basis". She was forced to do that due to her husband's work as a microbus driver in one of the internal transport routes in the city of Homs in central Syria.

Sahar says that the high quality of "iftar meal in Ramadan" is usually dependent on the yield of money at the end of the day, which is often good unless a destined circumstances occur, such as an emergency malfunction to the microbus that leads to keeping her, with her family, without abundant food.

"We will certainly renounce sweets, maybe a cup of sweet tea will be the only alternative available. As for meat, I do not think that we can use it, except for small quantities in types that require the presence of meat and chicken." Adds the woman, who has a family composed of her husband and two small children. 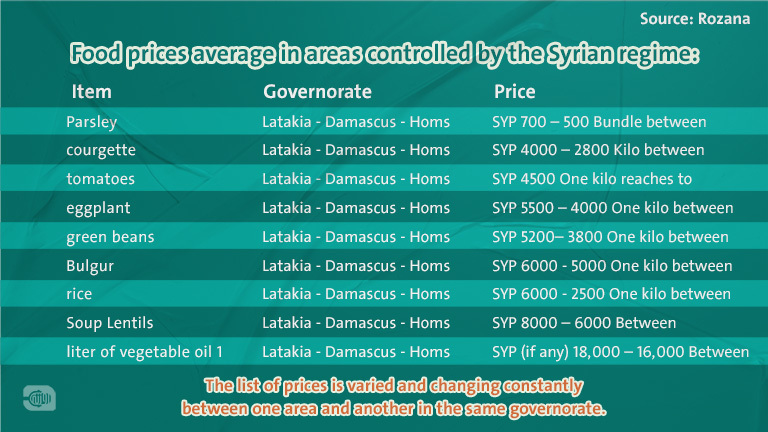 Jihad, 39, a government employee living in Damascus, does not have the luxury of Sahar. He and his wife depend on a monthly salary that does not exceed 225,000 SYP per month. This salary must suffice them with their infant, who in turn needs diapers that cost a sum of nearly 50,000 SYP at best.

Jihad is eager to get another job in translation through online freelance system, a matter that he used to help him with the affaires of his house, which he and his wife share its expenses. He says that he along with his family have dispensed with meat and chicken for a long time, he only purchases them if he gets money from his work in translation, and this depends on luck, as he put it. 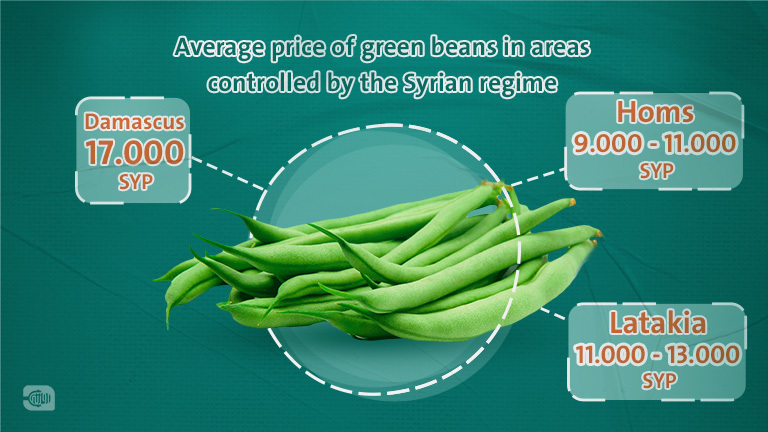 In formal terms, the workers of the private sector seem to be most fortunate. But practically, although they receive high monthly salaries compared to the salaries of the government sector in Syria, they are often not enough, especially after the recent wave of high increase in price in the country.

"The monthly income of all government employees, which reaches a maximum of SYP 200.000, and a minimum of about SYP 95.000", Rozana correspondent

Hanan, 42, works in a private company in Latakia. She paid 76,000 SYP for foodstuffs that are not adequate for three iftar meals for her family, which consists of four persons. She explains saying: " SYP 24.000 for less than one kilo of lamb SYP 12,000 for the price of chicken breast, and SYP 40,000 for vegetables, which are: 2 kilos of courgette and one cabbage, 3 kilos of potatoes, 3 bundles of parsley, 2 kilos of onions, less than half a kilo of garlic, a kilo of bananas, and 2 kilos of tomatoes".

After calculating the price of the food needed for the pre-dawn meal, Hanan expects that the amount may reach SYP 100,000, and added: "It is the luxury of the first days of the blessed month of Ramadan, which coincided with the beginning of the month, the date of receiving my salary which amounts of SYP 300,000." 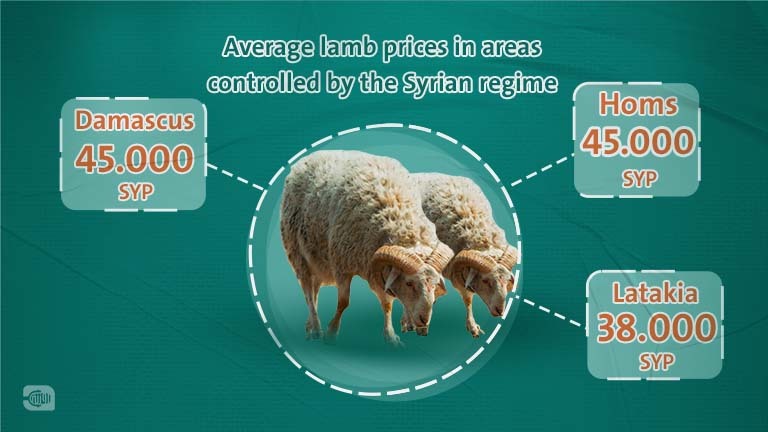 As for the rest of the month, Hanan depends, like the rest of the Syrians, on "the relief of Allah", and on her husband, who works as a taxi driver. Where the wage he gets will determine how the family will spend the days of fasting.

Hisham, 68, has been waiting for five days at the door of the Al-Fouad for Money Transfers Company in Damascus, in an attempt to obtain the amount of 200 euros, about (SYP 556 according to the official price), sent by his son from one of the European countries. However, the huge crowds in the company prevented him from obtaining the amount, which he sees as his only chance to be able to eat average quality food in the capital.

Hisham is a retired employee, he says that his salary does not exceed SYP 70,000, which is enough just for the price of medicines of the chronic diseases he suffers. He depends on what his son sends to him from abroad, and often the amount is 100 euros, but it was doubled this month due to the needs of the month of Ramadan. He intends to distribute a portion of it to his two daughters, and his other son who live close to him, and do not have high monthly incomes.

Prices Are in Continuous Increase

As a joke, Syrians are advised to take a pill under the tongue before visiting the market. This advice is about to become a reality, especially with the unbelievable rise in foodstuffs prices, even with types that were associated with poverty such as potatoes, "meat of the poor" previously, which the price of one kilo price potatoes is ranging between SYP 3,300 in Latakia, SYP 2,800 in Homs, and up to SYP 4,000 in Damascus.

"Prices vary from one area to another in the same governorate, and may decrease in some areas and rise in others, depending on the neighborhood, or transportation fees. Most sellers do not set a fixed price since prices are constantly changing, often to the increase." Said Rozana correspondent.

One of the owners of chicken shops in the capital, who preferred to mention his name, told Rozana that the majority of people do not buy in large quantities, due to high prices on the one hand, and the absence of electricity to store meat. So, the majority buy according to the necessities of the meal they intend to prepare. He indicated that the shops of "chicken necks" have been very active recently, where the price of a kilo of chicken necks is about SYP 4500, more or less depending on the daily price of chicken.

Half a Million the Cost of "Mujaddara"!

A Million and a Half the Cost of "Shakriya" 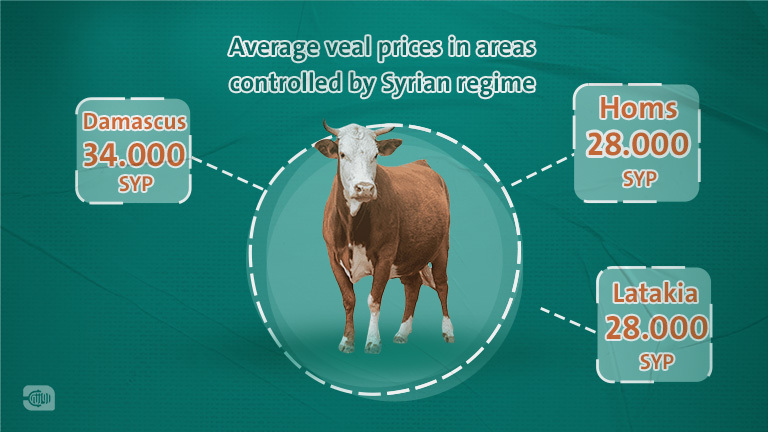 In view of the previous situation, it seems that the majority of Syrians have nothing to do but to connect night with day, and continue fasting until an indefinite period.