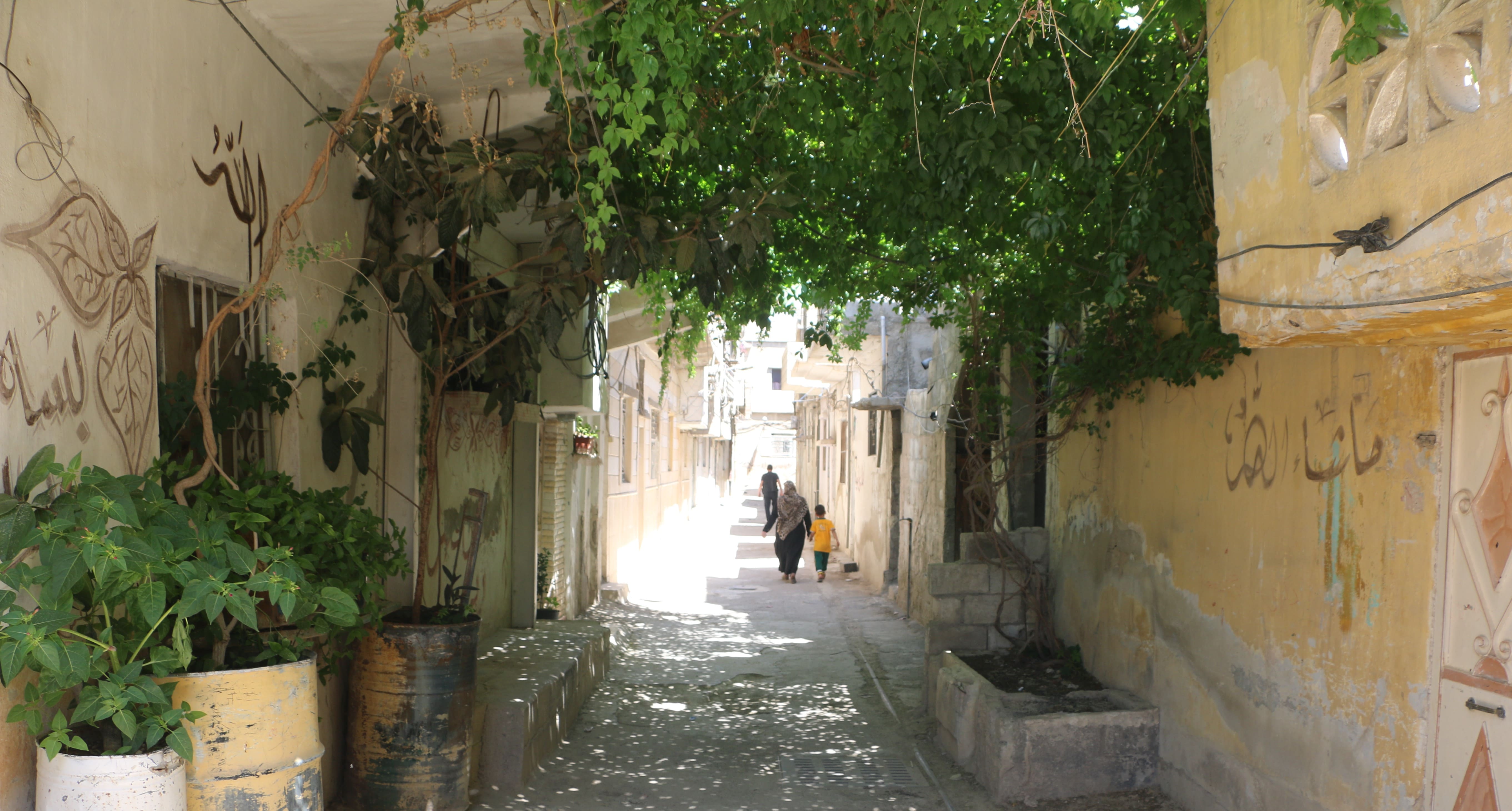 
Investigation reveals former rebel-held areas are being levelled under the guise of mine clearance to make way for high-end developments – leaving refugees nothing to return to.

The Syrian regime is bulldozing former rebel-held neighbourhoods in Damascus under the guise of mine clearance to make space for a “new Syria” of upmarket new building developments and pristine gardens.


An investigation by the Guardian, Lighthouse Reports, Syrian Investigative Reporting for Accountability Journalism (Siraj) and Rozana Radio has analysed the almost wholesale demolition of Qaboun, a Damascus suburb, one of many neighbourhoods in the capital that is being cleared and redeveloped beyond recognition after former residents have either been displaced by fighting or become refugees abroad.

Qaboun, a suburb of Damascus that for years resisted the Assad regime, had been emptied of people but was still standing when Syrian forces seized it in 2017. Since then videos and satellite imagery obtained by the Guardian and its investigation partners show Qaboun has paid a heavy price for resisting, with the Syrian military using highly destructive methods to wipe out the entire neighbourhood, justifying the levelling of residential homes as a de-mining exercise.

I think it is a message from the regime for the people of Qaboun. There is nothing for you here
Mazeena Saadi

Qaboun is one of several areas across Damascus and Syria that have been demolished after being identified for expropriation under the government’s postwar construction, which is hoping to encourage foreign investment in real estate.

Qaboun paid a heavy price for resisting Assad, with much of the area demolished since 2017 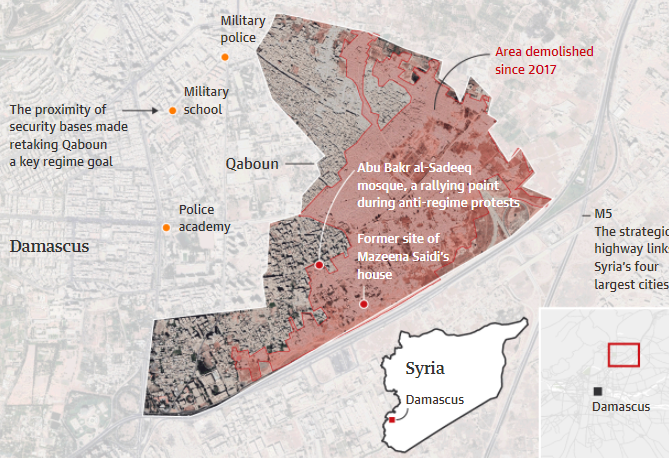 Guardian graphic. Image: Google Earth
The proposed plans show a dramatically different vision for Qaboun to the working-class neighbourhood that existed before the war and whose residents have been unable to claim their land since the fighting stopped, even while western countries such as Denmark and the UK tell asylum seekers that it is safe to return to Damascus. 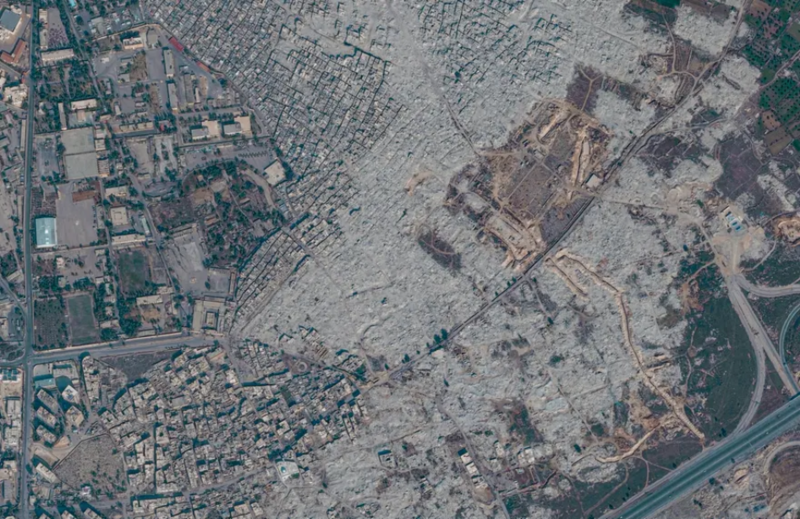 Former residents and researchers have accused President Bashar al-Assad’s regime of socially re-engineering the area after it became a rebel stronghold during the war.

Saadi’s eldest son was tortured during the early protests in Qaboun and by the time the whole family left in 2012, there was intense fighting between regime forces and armed groups opposing the military’s crackdown on civilian protests.

Qaboun finally fell to the regime in May 2017 and the military expelled the last remaining residents, among them some of Saadi’s relatives, who took a photo of her house before they left, which was still standing when regime forces took control. 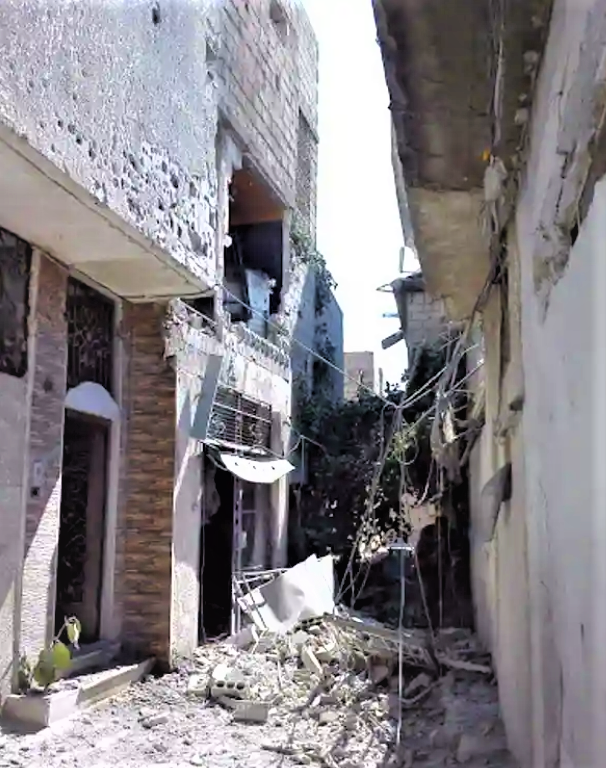 Mazeena Saadi’s house, which was still standing when regime forces took control of Qaboun in 2017. Photograph courtesy of a relative

In September 2017, satellite imagery showed her home and the surrounding vicinity was demolished.

In the past four years, the Syrian military has announced nearly 1,000 demolitions across Syria on its Twitter account, stretching from Daraa in the south to Aleppo in the north, routinely justifying them as the “removal of explosive devices left behind by the terrorist groups”. Satellite imagery and videos show far more demolitions were carried out.

The Russian military, which describes its training of Syrian military engineers as a humanitarian mission, is assisting Syrians on the ground with de-mining operations in several neighbourhoods of Damascus, according to Russian state media.

Analysis of hundreds of images, videos and social media posts from Qaboun reveal a pattern of large explosions that completely collapse buildings and much of their surroundings, which do not fit with the stated humanitarian aims.

He said the methods used by the Syrian forces could cause any undetonated explosives to gather under the rubble, which would be difficult to remove

“There are no shortcuts to humanitarian de-mining. You must deal with each item one by one. You must explode down to the surface until you reach the concrete,” he says. “If you just demolish the building, it doesn’t mean that all the explosives will detonate. This [style] is typical of military demolitions. But these are residential areas, so it shouldn’t be in the military’s mandate.”

Footage reportedly showing buildings near Mazeena Saadi’s former home being destroyed
One of the buildings demolished was an unfinished military housing project known as the Awqaf building, in late 2018. A video posted online shows members of the military watching the massive cloud of smoke that engulfed everything around the building.

Satellite imagery shows that in the following weeks everything in a 500-metre radius of the building was demolished, including a school. It will be replaced with investment properties, according to an official blueprint seen by the Guardian and its investigation partners.

Sara Kayyali, senior Syria researcher at Human Rights Watch, says the demolitions are potentially war crimes because there was no active hostility or military objective in the area after it was retaken.

Throughout the war, Syria has introduced legislation that has allowed the regime to expropriate land and build on it with foreign investment, often stripping residents of their land because of conditions placed on them to claim ownership – such as having to return to Syria to make their claim in person.

Qaboun’s demolition has taken place under one such law passed in 2015, allowing authorities to redraw boundaries in times of war and other disasters and claim the land of informal housing settlements.

Historically, Qaboun’s residents lived in largely informal settlements working in shopkeeping, small businesses and manual labour. The Assad regime’s vision for Qaboun is a more upmarket neighbourhood of high-rises and carefully curated green spaces close to the city centre but also connected to other cities by the M5 motorway.

The plans for Qaboun are part of the regime’s wider vision for Damascus – of a commercial capital with new urban developments built on former informal settlements, industrial zones and farmland. The flagship project has been Marota City, a neighbourhood of gleaming high-rises and pristine gardens planned in Basateen al-Razi, an informal settlement that had been an opposition hub.

Researcher Joseph Daher says the Syrian regime has used the war to push through existing plans to restructure Damascus, bring in capital from investors and reward its own network.

“War is used to deepen neoliberal policies and austerity measures, as well as to realise schemes it would not be able to do in a period that wasn’t a war or a crisis,” says Daher. “They’re using the war to put forward this kind of project that had a lot of opposition before 2011.” 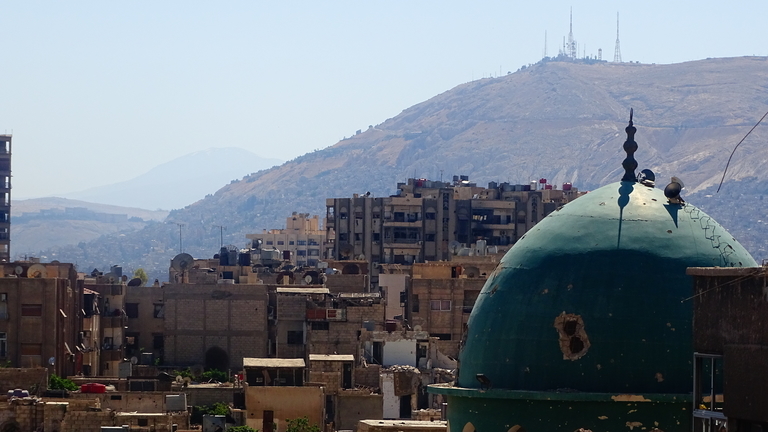 Daher says that, despite the plans made by the government and the demolitions it has already carried out, there has been little actual construction because of a lack of funds and the ongoing insecurity.

“The regime is completely lying when it’s saying that it wants the return of refugees. This is not the case. It doesn’t want them and it doesn’t have the capacities or the financial infrastructure to take care of them.”

Eleven years since the war began, most of the 6.6 million refugees live in uncertainty in neighbouring countries with no prospect for a safe return. Another 6.7 million are internally displaced within Syria in poor conditions and dependent on humanitarian aid.

Both Human Rights Watch and Amnesty International have documented torture of Syrians returning from Jordan and Lebanon, confirming the fears of the majority of those in exile who, like Saadi, are reluctant to return.

A Human Rights Watch report in October said returnees had also been subjected to extrajudicial killings and kidnappings, while most struggled with their basic needs in the aftermath of the war.

The Syrian and Russian governments did not respond to requests for comment.

For Saadi, there is no way home now that her neighbourhood has been demolished. In Denmark, the government has started revoking the residency permits of Syrian refugees, arguing that Damascus is safe for people to return. Saidi’s residency permit was renewed at the end of 2020, but her situation is precarious. The family must renew their status every two years.

“We were already tired, we just wanted some stability. As soon as we got a little of it here in Denmark, they started to say Damascus is safe,” says Saadi, who told the Danish authorities that there was nothing for her to return to.

“We are scared. It’s impossible for me to go back. My whole family is arrested, disappeared or killed by the regime. It is a regime of killers.”

this copy of story published by theguardian in partnership between theguardian with Lighthouse Reports, Siraj and Rozana Radio and was also published by Dutch newspaper Trouw and Lebanese media site Daraj.