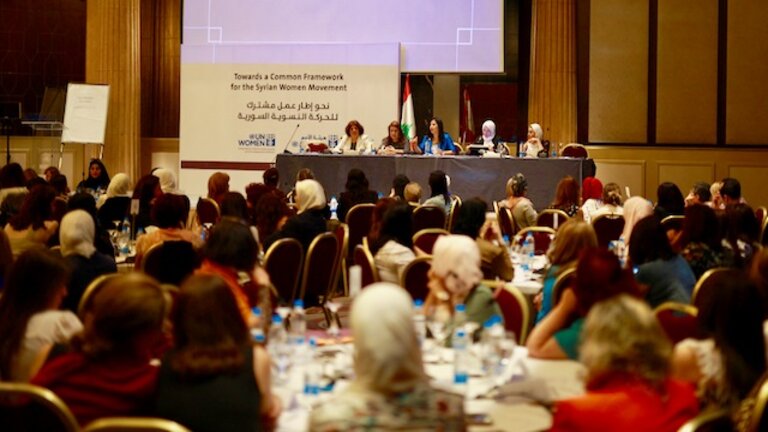 Syrian women during a meeting under the auspices of the United Nations in the Lebanese capital Beirut - Agencies
woman | 17 Mar 2022 | Muhammed Emin Mira
Despite their distinct contributions in Syria before and after the ongoing war, Syrian women face many obstacles that often prevent their effective participation in political domains. On International Women's Day, raising this issue seems to bear special importance.

The International Women's Day comes on 8 March of each year, and simulates a labour and protest movement in which about 15,000 women went out to the streets of New York City in 1908 to demand their social and political rights. 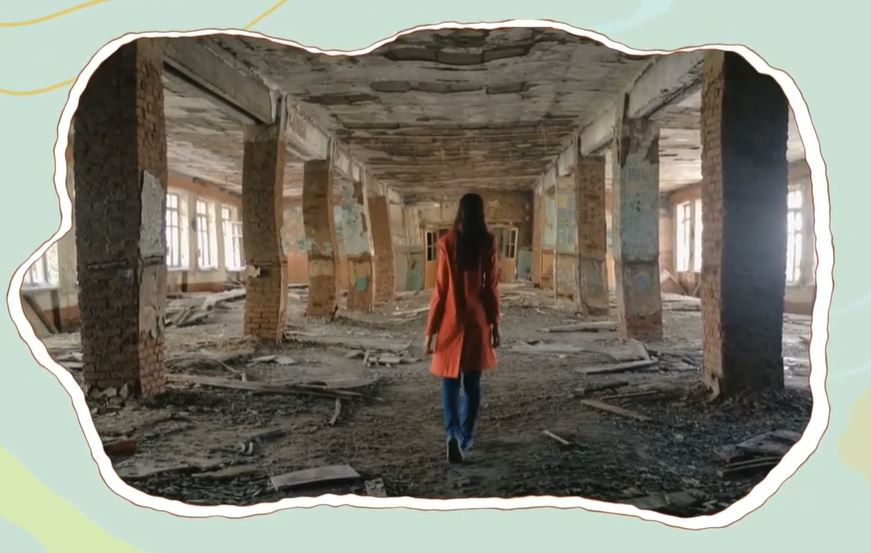 Syrian journalist Faten Abbara has engaged in various fields of political work, but she moved away because of the "masculinity that dominates leadership positions," according to what she described to Rozana.

The events of the Arab Spring granted an opportunity for Syrian women to be side by side with men in the popular movement that aims to change. However, at the political level, the presence of Syrian women remained a subject of controversy.

Some consider the presence of Syrian women as no more than formality that does not rise to the required level. While others find it, despite the few numbers compared to men, a positive change that is heading gradually for the better compared to the past.

"Sometimes, the presence of women is only a formality in order to engage them and appear civilized in political work," according to what the Syrian journalist Razan Zain Al-Din says to Rozana.

Despite the political presence of women with the various Syrian parties, their participation rates compared to men remained unequal, and can even be described as little compared to the available statistics.

Approximately 30 percent of the members of the Public Body of the Syrian Constitutional Committee are women, while the percentage of women's representation in the Parliament of the Syrian regime was only 11.02 percent.

Only 3 women out of 45 members participated in the Mini Drafting Committee within the Syrian Constitutional Committee.

Maryam Shamdin, the Regional Director of White Hats Organization for Sustainable Development (WHOSD), considered in her statement to Rozana that the political women work within the level of affiliation, so they seem to "belong to this movement or that party or affiliated with the group."

In light of that, “the political women serve the ideology they belong to more than they serve the Syrian feminist interest, and the women’s rights in general,” according to what Maryam said to Rozana. “We may see the social leader woman as more independent, since she realized early the participation and social responsibility on the ground ". She added.

According to Maryam, one of the reasons for the weak political participation of Syrian women is the lack of sufficient independence for them, and their permanent dependence on men, which increases the difficulties of their independent representation.

“Empowering women in crises and conflicts is a vital matter, as they constitute 50 percent of the world’s population, so they must be part of the solution.”  United Nations.


For her part, Faten Abara believes that Syrian women can succeed politically, but they need first social and economic empowerment to reach political responsibility.

According to journalist Faten, among the most important obstacles facing Syrian women to be political and influential is the authority of the masculine society, the dominance of men within the Syrian society, and the absence of women politically, economically and socially.

Suhair Al-Saniouh, a member of the Legal Office of the Syrian Women’s Council within Autonomous Administration of North and East Syria, talked about legal obstacles that prevent women from participating in political work, such as constitutions that discriminate them from men, and laws related to honor crimes, and the rules relating to the women’s granting citizenship to their children.

The cultural heritage based on limiting the role of women within the family with childbearing and care only, is one of the main reasons that set obstacles to women's political work, according to Suhair.

However, journalist Razan Zain al-Din believes that "it is unfair to generalize, since many Syrian politician women have succeeded despite all obstacles, and they managed to bear the burdens of politics."

According to Razan, every woman is "a mother of a detainee has become politicized, and every daughter, wife or sister of a martyr has turned into a political activist who looks for hope of victory."

Besides the difficulties of political participation, women struggle to find job opportunities. According to the latest UN statistics, "only one out of four women works in the Middle East and North Africa."

This represents half of the global average, which means that the number of unemployed women may reach 145 million by 2050, if the situation continues to be the same until that time.

A United Nations report said last year that nearly 90 percent of men and women have some form of a bias against women, in a percentage that reflects a general problem in dealing with women.

(Empowering women in crises is vital and critical, according to United Nations reports - Rozana)

Maryam Shamdin affirmed to Rozana on the importance of the correlation of women's political and societal work. The gap existed between them led to the failure to create a real initiative that contribute in the establishment of a feminist base that include both aspects, and to contribute in intensifying and integrating efforts to serve Syrian women's rights at the political, civil and social levels.

According to Maryam, the solidarity of women in large numbers - including the expatriates ones - means transformation into a broad and influential electoral base. This matter may enable change at the level of thinking, performance in the base, and the general performance.

“The women’s experiences and the representative women of the civil society are important in ensuring that constitutions, legal provisions, and new mechanisms and institutions include women’s interests, perspectives and needs” - United Nations


According to Suhair Al-Saniouh, it is critical to support the democratization process and the concepts of human rights and citizenship, to enhance the leading role of women, accordingly, fair elections that guarantee the peaceful transfer of power form the cornerstone of democratic transformation.

"It is necessary to provide all kinds of support to women who occupy leadership or political positions, and to prepare a generation of women who are able to be present and influence to attain the achievements," according to Suhair.

According to a study, quoted by the American Carnegie Endowment for International Peace, the ceasefire agreements have a greater chance of succeeding for a period that may last to 15 years, with a percentage of 35, if women participate in the negotiations.

In its reports relating to women, the United Nations calls for facilitating and deepening the participation of women in the Syrian political process at all levels, and to meet with local women's groups and support them.

“Empowering women in crises and conflicts shall be one of the most critical tools in the peace process. The use of women mediators or women-based networks can be a good starting point to make leaders realize the importance of engaging all populations,” according to the United Nations.