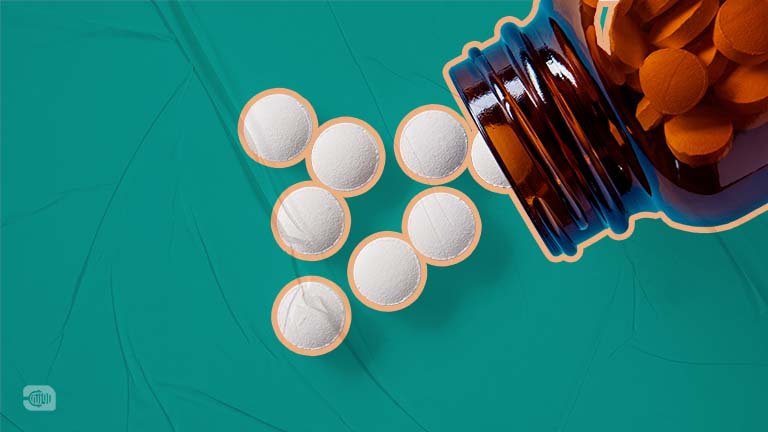 He left his wife and children hungry for days in order to buy pain relievers. He even sold most of his home furniture and drained his savings. This is how Hisham describes his condition after his addiction to pain relievers.


Hisham exploited his mother's tenderness in obtaining money to buy something to relieve his addiction. He says: " I have never bothered my mother with a single word in all of my life, but after I became addicted to pain relievers, I began to quarrel with her, and to say bad words to her when she refuses to give me money."

Hisham fell into the trap of addiction to pain relievers about a year and a half ago, after he had a traffic accident that resulted in 13 broken bones in his leg.

During his treatment, he moved gradually from normal pain relievers to addiction of concentrated analgesic drugs, which contain narcotic opium. These pain relievers act on specific receptors placed in the central nervous system.

Kamal, a nurse who works in a drug warehouse in northern Syria, started to provide Hisham with various types of pain relievers that are forbidden to be sold except with a prescription.

In this regard, Hisham says that Kamal was exploiting his need for pain relievers, and he was selling him pain relievers that he obtained from the warehouse by illegal means, at high prices, amounts up to 20 times of their real prices in the pharmacy. 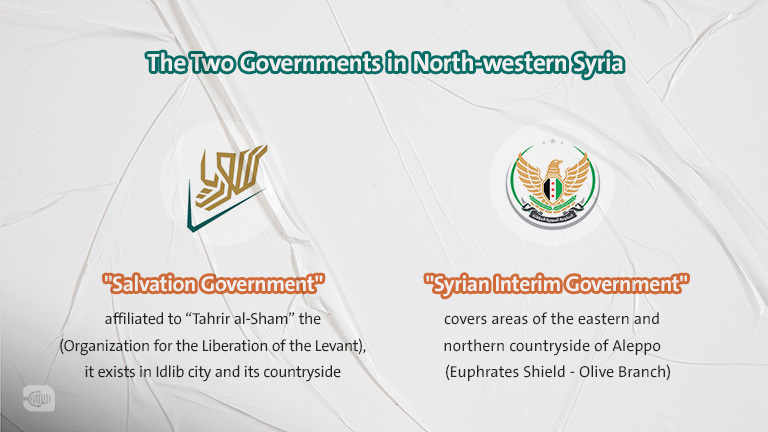 In north-western Syria, there are drug warehouses that do not adhere to medical warnings, so it is not difficult to buy medicines from them without a prescription, especially pain relievers with the aim to earn huge profits. The families of the owners of these warehouses are described as “medicine merchants.”

The aggravation of the problem of pain relievers addiction is due to the weak control over drug stores and pharmacies in northern Syria, besides the focus by the medical authorities on the emergency medical cases, especially victims of bombing and military operations during the years of war, according to the consensus of doctors and pharmacists working in north-western Syria.

Asaad (pseudonym) is a fighter who lives in northern Syria. He preferred not to mention his name and the name of the faction he belongs to for security reasons. He suffers from a backbone and foot injury caused by air strikes four years ago.

He continued: "I still suffer from severe pain due to the injury, and I am forced to buy pain relievers, which I became addicted to, from the black market in case I cannot get them by a doctor's prescription."

When the effect of the analgesic drug in his body ends, he suffers from general fatigue and convulsions that could last for 24 hours, as well as a loss of appetite and dizziness. 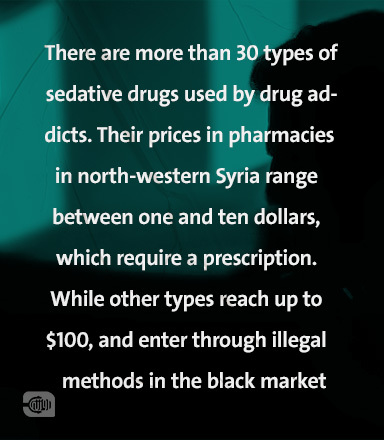 Hisham managed to succeed in quitting addiction to pain relievers with the help of a doctor after several failed attempts.

Due to his experience with addiction, he warns persons similar to his case from slipping into the trap of addiction to pain relievers. He also advises each patient not to take these drugs except of a quantity that is determined by the doctor, since addiction is a short relief followed by great pains, besides psychological, physical and financial consequences.

Asaad, on the other hand, is still trying to get rid of his addiction to pain relievers by reducing the doses and listening to the advice of doctors.

Asaad advises the injured patients, especially (bone injuries) to stop taking pain relievers after recovery from the injury in order not to reach the phase of addiction and its dangerous repercussions.

He also hopes that doctors help the injured persons to obtain sedatives that relieve their pain in a scientific way that keeps them away from addiction.

No Sanatoriums or Centres for the Treatment of Addiction in Northern Syria!

Bishr Haj Hussein, a worker at the Union of Medical Care & Relief Organizations (UOSSM), confirmed that "there are no rehabilitation centres for drug addicts and for those who are abusers of medical substances in northern Syria."

In those areas there are only specialized mental health hospitals that receive addiction cases temporarily for a period of 16 days to a one month, and they are limited to receiving cases with psychotic symptoms, that is, mental disorders, according to Haj Hussein.

Regarding the reasons behind the absence of addiction treatment sanatoriums, Ahmed Othman, a psychologist in the Mental and Psychological Diseases Unit in Sarmada, Idlib countryside, said that the lack of specialized cadres prevents the establishment of such sanatoriums.

While the absence of addiction treatment sanatoriums is mainly due, according to the doctor, to the difficulty of securing drugs that treat addiction, and there are red lines and great complexities regarding entering these drugs to Syria from Turkey.”

Mowaffaq Amouri, a psychologist who was the director of “Save the Soul” sanatoriums in Idlib that was recently closed due to the suspending of support, revealed that there is currently a follow-up to a number of addiction cases in homes, without giving a number of such cases.

Regarding dealing with the addiction of pain relievers drugs in northern Syria in the absence of sanatoriums, Haj Hussein said that "the response is limited to the preventive level through awareness campaigns about the harms of misuse of medical materials."

Medical and educational bodies in north-western Syria have organized workshops and conferences with the aim of spreading awareness of the negative effects of pain relievers addiction, but it is not possible to ascertain their effectiveness, especially these activities are limited to awareness only.

There are no official figures for the number of addicts in northern Syria, for several reasons, including the lack of a single authority, the state of war that the region is witnessing, and the lack of hospitals specialized for addiction.

Two Ways to Legally Deal with Drug Crimes According to the Syrian Interim Government!

Lawyer Hossam Sarhan, indicated that courts in the areas of the Syrian Interim Government in the countryside of Aleppo, northern Syria, apply the Syrian Drug Law of 1993 to deal with cases of drug abuse, drug dealing and drug crimes.

For his part, lawyer Mohammad Khair Ayoub, who practises law in the territories of the Syrian Interim Government in northern Syria, pointed out that judicial prosecuting with drug crimes, including abuse, is limited to the punitive side due to the absence of sanatoriums for the treatment of drug addicts.

There is no text in the Syrian Drug Law stipulating that drug abusers be referred to a sanatorium for treatment, nonetheless, before 2011 more than 90 percent of cases of addiction and abuse were referred from the judiciary to treatment sanatoriums, according to Ayoub.

Lawyer Ayoub warned of the spread of the phenomenon of abuse, trafficking and promotion of drugs in northern Syria, explaining that drugs became at hand in those areas, which is a "very dangerous" matter, as he put it. 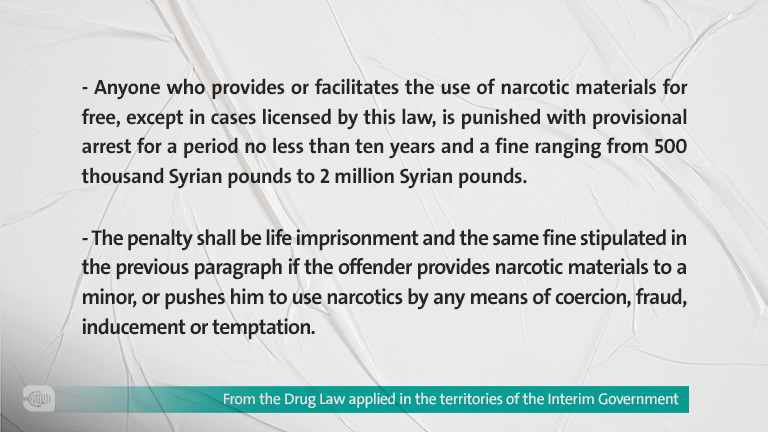 In the areas of the "Syrian Salvation Government", the penalty for drug abuse that is issued by the courts ranges from one to three months, in addition that the drug addict is obliged to attend a mandatory awareness course.

The offense of trafficking in narcotic substances shall receive a punishment up to five years of imprisonment with a fine to be determined by the judge.

Treatment remains the best thing that can be applied to drug addicts. Besides securing health centres that treat them to get rid of addiction, and to rehabilitate them in order to reintegrate into society again.

This material was produced as part of a training program that includes journalists from Syria, Palestine/Gaza, Yemen and Sudan, it was organized by “Awan Organization”, with the support of International Media Support organization.