The Settlements in Raqqa: is Fear the Motive Behind Reconciliation? 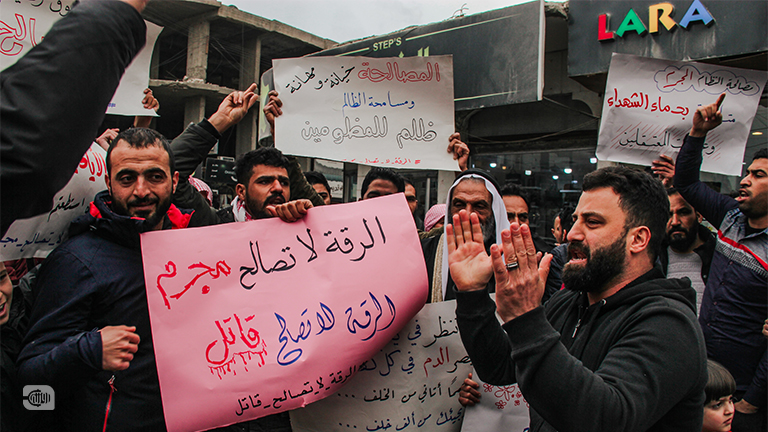 The Syrian regime has launched a “settlement process” on the twelfth of this month, in the town of al-Sabkha east of Raqqa, which is under the control of the regime. The process is witnessing a great turnout, according to official media affiliated with the regime, and civilian activists from Raqqa.


The settlement in al-Sabkhah is private for the people of Raqqa governorate. It started after the finishing of other settlements in Mayadin city and the expansion towards the western countryside of Deir ez-Zor.

Fear of losing property is the regime's weapon to push residents towards the settlement.

Abu Ahmed, a pseudonym for a 58 years old man, was one of the first people to participate in the demonstrations against the Syrian regime in 2011.

He was arrested with three of his sons, due to their pro-revolutionary activities during that period. However, he is going to make a settlement with the regime today!

His eldest son tried to stop him from doing so, but he wasn’t able to dissuade him from his decision. He went to al-Sabkhah and actually carried out the settlement, not out of love for the regime or to make peace with it, but to retrieve his home and lands, which were confiscated by the regime forces in his regime-controlled village southeast of Raqqa.

"Rozana" met with Abu Ahmed's eldest son, who narrated what happened: "We left our village about four and a half years ago when the regime took control of it. But our living conditions, here in Raqqa, deteriorated a lot. In addition to that, the regime confiscated our property in our village, therefore my father decided to go back and make a settlement".

Ahmed explains that his father is still there to retrieve the properties and sell them, and then return to Raqqa. He adds, "I felt that my father was heart-broken while riding the bus heading there. I tried to stop him, but he told me he had no other choice! If he did not do that, our situation would get worse".

"Media activist" Hazem Abu Hudhaifa confirms that many of his relatives who descended from the villages and towns of the eastern countryside of Raqqa, which are under the regime's control, made settlements with the aim of recovering their seized properties.

He explained: "The regime used the method of seizing agricultural lands and putting them for rent in public auctions, in addition to confiscating homes and shops. The difficult economic situation of the owners of these properties who were displaced after the regime took control of their villages, pushes them to accept reconciliation with the regime to retrieve what they worked for all their lives."

Hazem adds other reasons that push people towards reconciliation, such as the weakness of the education and health sectors in the areas controlled by Syrian Democratic Forces SDF, in addition to the need for official identification papers, such as school certificates and passports, according to his statement to "Rozana".

The Syrian regime controls parts of the eastern and western countryside "south of the Euphrates". The National Army factions control the two districts of Tal Abyad and Suluk, besides their surrounding villages and towns in the north of the governorate.

Some people in Raqqa fear the return of the Syrian regime to take control of the governorate, in case of withdrawal by the United States and concluding an agreement between SDF's and the Syrian regime to that effect. This matter is a reason that drives some towards settlements, according to Hamza al-Mulla, a civilian activist.

Hamza believes that the media propaganda constantly published by the regime on social media platforms has deeply impacted many people, through convincing them to apply for settlement out of fear of the brutality of its security services in case it comes back and takes control of the city, as he put it.

"The regime aims to send messages to people within and outside Syria that it has won, and the whole of Syria will be under its control. People are fatigued and no longer have the ability to seek refuge abroad, therefore, we see some people move towards reconciliation." He added.

Meanwhile, a private source from the SDF Internal Security Forces told Rozana that SDF intend to prevent those who plan to carry out the settlement from traveling to the town of al-Sabkhah, where the settlements are taking place. They also intend to hold accountable and investigate with everyone who applied for settlement." according to the source.

This restriction has not prevented some civilians who desire to conduct a settlement from taking other paths if prevented by the SDF, such as claiming they are heading to Damascus, upon reaching areas controlled by the regime, they return to al-Sabkhah, according to what eye-witnesses told Rozana.

He explains that there are no negotiations with this regime, but mere attempts of dialogue. He says: "We look for a constructive dialogue to achieve a gain for our people, but the regime does not recognize what happened in Syria and considers it to be a simple problem that can be solved through settlements."

The role of leaders of tribes

The political opinions of the leaders and members of Raqqa tribes are varied. The community in Raqqa is a tribal, there is no fully loyal and opposing tribe.

The Syrian regime worked to attract the notables of the city's tribes to influence the members of their tribes, according to Mohammad al-Awwad, the sheikh of Albu Manea tribe.

Sheikh Al-Awwad says to Rozana that he received an offer from one of his relatives who resides in the town of Al-Sabkha to return to his home and apply for reconciliation, in an honoured and respected way as the owner of the offer told him.

The regime confiscated the house and lands of Sheik al-Awwad four years ago. His house was converted to a headquarter for Political Security, while the regime is working to persuade him to apply for a settlement in order to influence the tribe members to return to the regime, and to recover his confiscated properties as well. However, he rejected these offers, as he told us.

On 11th of the current month, a number of Raqqa notables and leaders of tribes issued a statement confirming their absolute rejection of settlements with the regime, considering that the regime is the part that should apologize to the people, as stated in the text of the statement.

Meanwhile, other notables and leaders of tribes gathered in al-Sabkha town to support the settlement process and to encourage and reassure the members of tribes wanted by the regime to turn themselves in.

Dozens of activists and residents of Raqqa demonstrated in Shammas Square in the city center last Wednesday, rejecting reconciliations with the Syrian regime. The demonstrators carried banners that emphasize their absolute rejection of the settlement, and chanted slogans supporting the Syrian Revolution.

Last Friday, a demonstration also took place in the city of Al-Tabqa in the western countryside of Raqqa, rejecting the settlements as well. Dozens of residents of Al-Tabqa city participated in the demonstration and chanted against reconciliation with the regime.