Forgotten Refugees in Lebanon.. They Burn Plastic and Shoes to Warm Their children 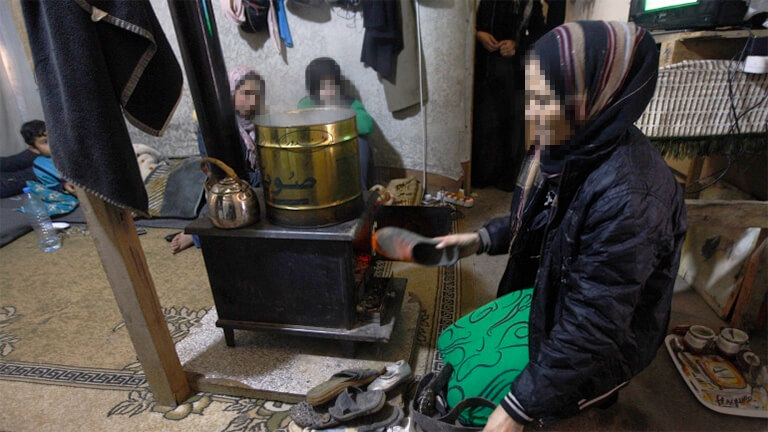 “Help us, for the sake of Allah”. Outour Harba, 73 years old, a Syrian refugee in Lebanon, ends her discourse in the video that was circulated on social media.


Outour is one of many grandmothers who are upbringing their grandchildren after the death of their parents, either in war or in the endless journeys of asylum and displacement. What the old lady wanted was just to kindle a fire to warm her grandchildren on that cold night of December.

She brought a container and kindled fire in it using what she found of rags and old shoes, but she ended up burning her weary hands.

"Rozana" contacted some people close to Outour, and found that the woman does not receive any assistance, and that she is living in one of the Arsal camps, where the snow storm gets worse. Outour is upbringing her grandchildren after the death of their father, devoting herself for them.

She is trying to secure a normal life for them, but she suffers from many diseases and her deteriorating health does not allow her to provide for their needs, especially after the disruption of assistance. Outour asks the world one question: "I am an old woman. What can I do?"

Genuinely, what can she do?

The story of Outour in northern Bekaa in Lebanon, is similar to another story in another camp in Miniyeh in north Lebanon. It is the story of Haifa, who lives with her four children and her husband without any income, and all that the family gets is little food assistance.

"My husband is unemployed, my son (12 years old) was working in a supermarket, but he was fired due to the bad mood of one of the customers, and now he is unemployed. All of my children are out of school... What should I do?" Haifa says. She cries a little, before she gathers her strength and adds: "they sent me two fuel tanks for heating in the beginning of winter, and then they forgot me".

Read also: A new wave of asylum for Syrians. Will it cancel the possibilities of returning home? 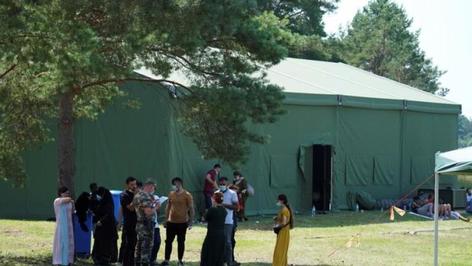 Like Outour, Haifa collects rags and old shoes and burns it for heating, in light of absence of any aid for refugees as well as for Lebanese citizens, in a country where everyone is left stuck to the unknown.

It is winter, specifically the storm “Heba”, which threatens to bring cold and distress incurred by the poor, especially refugees. You can see them rush to look for available firewood, haystacks, bags and empty cartons, not to mention old clothes and shoes and plastic to burn them. They might just cover their bodies and their children's bodies with blankets, if available.

The situation is getting worse this year with the high prices, and the dollar rate, which reached 24,000 pounds, and it also reached 34,000 pounds a few days ago. While the price of the barrel of diesel is static at 150 dollars, which became the dream of the poor Lebanese and Syrians. So, the scenes of camps drowning in torrents and children freezing in this merciless storm are renewed.

Where is the assistance?

According to a tour made by "Rozana", it was found that international organizations and NGOs did not provide sufficient assistance for the winter, and the few assistances that was distributed selectively, without coordination between the associations. The result is that much assistance reaches some families, while nothing reaches other families. The distribution process is subjected to relations and mediation, without a clear organizing of assistance delivery.

Syrian activist Maher al-Masri told Rozana: "We are trying to set up a mechanism for assistance with associations, but we have no authority over them. Therefore, this assistance is subject to selectivity and mood, which deprives many of their right to assistance." He added: "In Arsal, there are families who received 80 litres of diesel fuel for heating, while other families did not get anything." Bearing in mind that the heating stoves (a means of heating) in these camps are old and often not useful, especially the refugees are forced to burn anything inside them, such as plastic, which puts them at risk, not to mention environmental and health damage from burning materials of this kind.

Almost a week ago, refugee Abdullah Saifuddin (Arsal) was trying to ignite the heating stove. The materials exploded inside it, causing a major fire in his tent, and serious burns to his wife and baby. They are still receiving treatment at the relatives' home, although the status of the wife necessitates entering the hospital. According to Rozana, Abdullah fortunately received some assistance like blankets and kitchen items, in addition to $100.

Al-Masry says: " At the start of the freezing season, the United Nations High Commissioner for Refugees (UNHCR) distributed 1.8 million Lebanese pounds as winter aid. The price of a single tank of diesel at that time was about 450,000 pounds. This means that the amount only buys four tanks, which is not enough for one month in this frost. Thereafter, the assistance became without a clear mechanism.

A Syrian activist, speaking anonymously for security reasons, says that " Some of the assistance that has arrived in Lebanon for the refugee camps has been distributed in Bekaa, but it has almost disappeared in the neediest northern, especially in Akkar and Halba, as refugees face freezing weather without any kind of support".

In September 2021, UN agencies expressed serious concern about the rapidly deteriorating living conditions of Syrian refugees in Lebanon, indicating that almost all Syrian refugees are now unable to provide the minimum expenses necessary to keep on living.

The preliminary results of the vulnerability assessment of the Syrian refugees in Lebanon 2021 revealed a deplorable situation, as nine out of ten Syrian refugees still live in extreme poverty today.

According to the assessment, the majority of refugees have continued to rely on negative coping strategies to survive, such as begging, borrowing money, withholding their children from school, cutting back on health expenses or not paying home rent.

The assessment indicates that 2021 has witnessed an increase in the number of family members who were forced to accept low-paid or high-risk jobs or extra shifts to secure the same income that the family was able to provide in 2020.

Today, while snow and rain fall heavily, especially in mountainous and forgotten areas, refugees find themselves without any real support in cold and weak tents.

This situation clearly reflects the lack of sustainable plans for the refugee issue, such as providing them with proper infrastructure and housing that protects them from the harsh weather conditions and does not endanger their lives... Until then, how many grandmothers, fathers, mothers, brothers and children will burn their hands in search of warmth?