Syrians Respond to Faisal Mekdad: "There is No Hope of Returning with the Regime's Presence" 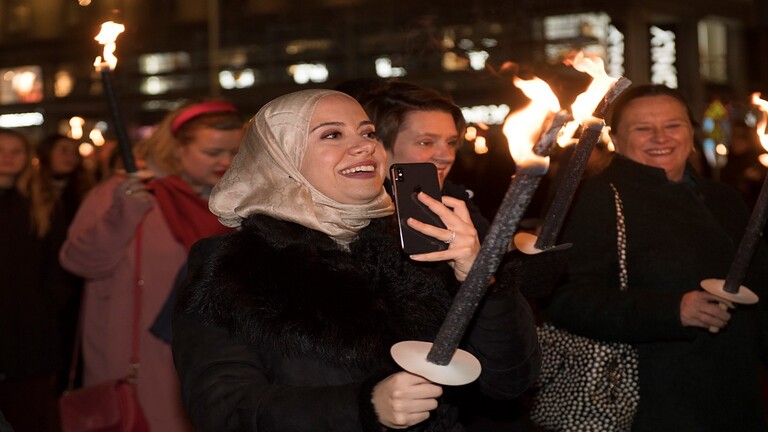 "We did not migrate because of the fear of death, we migrated for fear of our honour, we came out by force", says Hadi, 49 years, a Syrian refugee living in Norway for about 8 years, in reply to the Syrian regime’s messages calling for the return of refugees to their homeland.


Many Syrian refugees residing outside the country refrain from returning for various reasons, most significant are the security conditions and war. Where more than six million people were displaced, according to the United Nations. While the government of the Syrian regime has consistently called on the governments of countries that have received refugees such as Lebanon, Jordan, and, most recently, Norway to facilitate their return.

On Thursday, the Syrian Minister of Foreign Affairs Faisal Al-Mekdad called Jan Egeland the Secretary-General of the Norwegian Refugee Council to "exert all reasonable efforts to alleviate the pain and suffering of the refugees, to facilitate their return to their country, and to maintain communication to remove any artificial obstacles to their safe and voluntary return". According to Al-Watan newspaper.


Al-Mekdad added: "Syria welcomes the return of all Syrian refugees to their homeland, and it takes all measures and facilities to create conditions that guarantee voluntary and safe return, in addition to good living conditions for the returnees".

Hadi, along with his wife and children were displaced from the city of Homs, He migrated to Norway in 2014. He says to "Rozana" in reply to its question regarding returning to Syria: "There is no sane person head back to the regime’s territories, is it reasonable that a person migrates away from his homeland just for love of experience?".

He adds: " we were forced to migrate from our city, shelling and displacement is easier than rape, we did not migrate for the fear of death."  Since 2011, Homs governorate has been subjected to ongoing military campaigns that have led to the displacement of thousands of people.

The opinion of Ibrahim, 36 years, a single young man, corresponds to that of Hadi who has settled in Norway since 2015 with a political residency. Because he was forced to leave Syria escaping military service with the Syrian regime.

Ibrahim says to "Rosana": "I graduated from university in Syria, then I resorted to Lebanon for two years, after that I reached Norway. Now, I have permanent residency, and soon I will get the Norwegian citizenship. Why I think of returning to Syria, while I have a job, home, and a stable life."

The same for Amjad, 29 years with two children, the most important reason for his departure from Syria to Jordan in 2013 was his desertion from military service. He resorted to Norway with his family through the United Nations in 2019. He says: "I absolutely refuse to return. We learned language, we merged with society, we established our own business, and a new life. Unfortunately, we hated the country because of the regime and its crimes".

He continues: "My return will be for the sake of my motherland, for longing to my family and lovers. I did not see my brothers for ten years. What deeply grieves me is when my brother says do not miss, stay at exile, it is better for you than living in Syria. I hope I can return, but not to the current regime. Now, there is no hope of return as long as the regime exists".

The "Norwegian Refugee Council" warned through its report last March that the Syrian crisis could witness additional displacement of at least 6 million Syrians over the next 10 years in the event of continued political conflict, insecurity, and economic deterioration in Syria.

According to interviews conducted by the "Norwegian Refugee Council", some Syrian refugees have lost their hope of returning home under the current circumstances, while others have said that the return to Syria in the near future will be only upon achieving a political settlement guarantees their safety.

Last March, Norway received 35 Syrian refugees coming through Greece, who fled the Moria camp on the island of Lesbos after it was burned in September 2020.

The Human Rights Watch organization issued a report in October entitled "A Life Like Death," in which it said that "Syria is not safe to return... Massive violations of property rights and other economic difficulties also make sustainable return impossible for many".

In its report, the organization stated that among 65 returnees or their family members whom it interviewed between 2017 and 2021 from Jordan and Lebanon, there are 21 cases of arbitrary arrest and detention, 13 cases of torture, 3 cases of abduction, 5 cases of extrajudicial killings, 17 cases of enforced disappearance, and one case of alleged sexual violence.

The organization called on all States to protect Syrians from return to face violence and torture, and to stop any forced repatriation to Syria. At the same time, the Office of the United Nations High Commissioner for Refugees (UNHCR) asserts that it will not facilitate mass returns during the absence of basic protection conditions, since Syria is not a safe country, although it does facilitate individual voluntary return.

As of the end of 2019, Syrian refugees’ percentage was 25% of the global refugee population, according to a report issued in June 2020 by the Office of the United Nations High Commissioner for Refugees (UNHCR). Where "The number of Syrian refugees reached 6.6 million, spread across 126 countries.