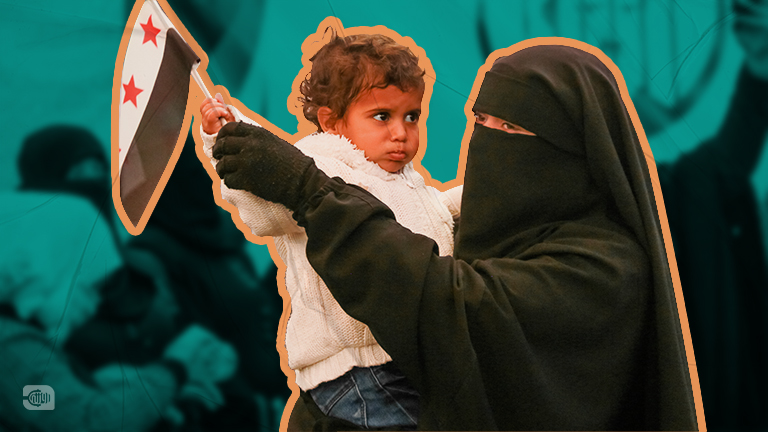 Women’s clothing, virtue, and chastity are topics that Hay’at Tahrir al-Sham (HTS), or Levant Liberation Committee, seeks to stress within its areas of control in northern Syria every now and then.


The organisation calls on women, through various means, to maintain what it calls “legal dress” and not to wear makeup, which some see as a consolidation of patriarchal authority by imposing restrictions on women and limiting their freedom.

“You are trusted with your honor my brother, a woman’s dress speaks about her father’s upbringing, her brother’s jealousy, and her husband’s manhood.” “Sister, you are a hero maker and the educator of generations, so fear Allah, you have a major mission.” These are messages published by the Salqin City Endowments Directorate affiliated to the “Salvation Government,” the political arm of the “HTS” street banners in Harem, north of Idlib, on the 21st of last September, as part of the “Guarding Virtue” campaign.

These banners were admired and applauded by a large number of men on social media, while the opinions of women and girls on the matter were absent. During the previous years, women and university students were arrested for allegedly violating the dress requirements imposed by the “Commission” in its regions.

Women's clothing, as required by "Tahrir al-Sham", must be loose and cover the whole body, not outline it or help see through it, and not be embellished.

When will young men behave ?

Young women and ladies are afraid to express their opinion on the issue of dress in the areas under the control of “Tahrir al-Sham.” Any decision or adaptation on dresses is a reality imposed on them that they cannot oppose, whether they support or reject the instructions.

Rima from Idlib is 23 year-old university student and a worker in psychological support for children and women, told "Rozana" that "the authorities' aim is to pressure and control women through these instructions even though most of them wear long and modest clothes that do not show the features of the female body."

Rima, who wears an abaya, adds, "I do not like to be instructed about what I wear by anyone, but it is a reality imposed on us, so what can we do?"

"Why do we not see banners calling on young men to stop gazing and respect women?!" she wonders.

She continues: "Women and girls are subjected to a lot of harassment by young men, such as phrases of flirtation when passing through the streets and markets or being pursued. We hope that more useful issues will be emphasised."

She believes that "the authority's emphasis on the dress code is back again as the number of working women has increased in the region, coupled with more awareness of women's freedom."

Laila, 27, residing in the camps in the north of Syria, considers that "clothing is a personal freedom, but the environment, customs and traditions impose themselves, and this is what prompted the authorities to remind about the dress code, given that Idlib governorate is a naturally a conservative area."

According to a United Nations report last September, the number of people killed in the war in Syria for the past ten years has reached more than 350 thousand, with at least a woman among every 13 people killed, which makes the number of women killed 26,727.

A good number of young men or men consider it a good thing to be reminded of the issue of dress, in light of the increasing diversity of women's clothing in Idlib.

Amin, 24, from Idlib, pointed out that reminding people of the veil through banners or awareness campaigns is a "very good step to spread religious awareness."

Concerning women’s and girls’ clothing, Samir, 28, who resides in Harem, north of Idlib, told Rozana: “Some are committed to wearing abayas and veils, others wear a jacket that reaches the knees in different striking colors, which is rather a small number."

"Long dresses sometimes draw attention when they are tight and outline the girl's body, especially when it is colored, with light and fragrant makeup. If a girl passes by, a guy will look at her," adds Samir.

A month and a half ago, HTS established "Al-Falah Apparatus", whose motto is "Promotion of Virtue and the Prevention of Vice", and acts as a "Religious Police". Its staff, men and women, are tasked with monitoring the markets to prevent mixing, and so on.

Zuhair, 30 years old, residing in the camps in northern Syria, believes that HTS’ demand to preserve women’s dress “is linked to the Afghan experience and the Taliban government, which imposed its opinion on the international community by controlling all aspects of life, especially women’s movement and dress, which influenced Tahrir al-Sham and prompted it for those behaviours.

In May 2018, the Commission for the Promotion of Virtue and the Prevention of Vice issued a law specifying women’s clothing to “cover the whole body, be loose and thick, neither outline the body nor help see through it, and not be an adornment in itself by being embellished.” It considered that the dress specified for women is part of what it called "public morals law."

Women's dress is the honor of society!

Heba Ezz El-Din, from the humanitarian organization Equity and Empowerment (EE), believes that "women and their bodies are used to strengthen the patriarchal authority that believes that women's dress is part of family honor and the honor of societies."

She added to "Rozana": "the HTS raises socially acceptable topics related to issues of honor, to provoke masculinity, and to promote itself in order to be accepted in society. These issues related to women and honor achieve great consensus.... Its aim is to subjugate women who have emerged from under the mantle of male authority."

The Ministry of Endowments of the "Salvation Government" was not satisfied with publishing the banners, but followed them with four electronic competitions that included religious questions within the framework of the campaign. The fourth competition was attended by 28,000 contestants, according to the "Al-Sham News Agency" concerned with reporting the news of the HTS.

The HTS exploits the tendency of societies to venerate the honor embodied in women, and tries to talk about women's clothing and the necessity of covering their bodies, according to Heba.

She believes that the restriction on women through dress is the result of the HTS's fear of eroding its masculine authority, and it is nothing but an "attempt to return the rebellious women to the house of obedience, especially after some of them refused the niqab and the abaya and the stifling laws issued by it."

She believes that the actions of the HTS and its call to preserve the veil of women come within the campaign of hostility to feminism, which was recently accused of calling for the removal of the veil and nudity.

She said: "The HTS exploited the societies' aversion to feminism and the fear of women's nakedness, as society became a catalyst and qualified for anything that calls for women's modesty, and any decision that imposes more restrictions on women's dress is more acceptable."

Muhammad Ayman al-Jammal was a member of the "Syrian Opposition Coalition" and a doctor of Islamic studies, who recently accused "feminism" of being behind some of the crimes committed against women by their families in Syria. It must be fought.

Women's dress is a masculine symbolism

Social researcher Safwan Qassam told "Rozana": "Interference with everything related to women's life is present in all patriarchal groups that depend on their legitimacy from religion, custom and customs, such as women's dress or their relationship with their partner and their role in life."

And in October 2015, the “Army of Conquest” (an alliance of Islamic factions whose nucleus is the Ahrar al-Sham movement and Hay’at Tahrir al-Sham), which controlled most of Idlib province that year, issued a decision obligating women to wear Islamic dress and to prevent makeup, as well as obligating women’s clothing stores to have a woman selling customers