A new Wave of Syrian Refugees.. Does it Cancel out the Possibility of Returning Home? 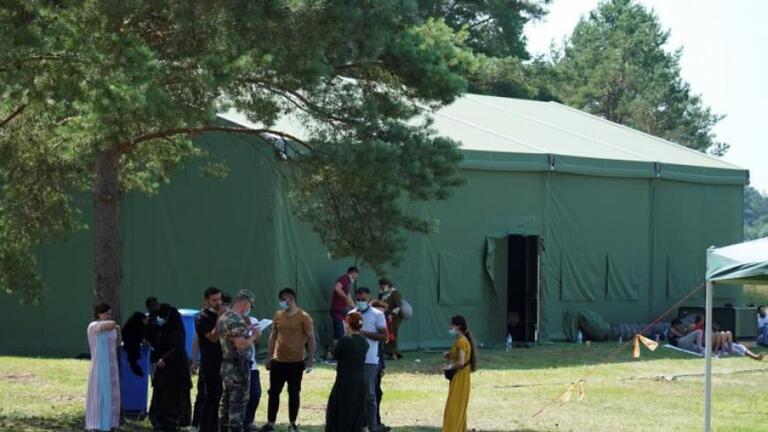 Thousands of Syrians residing at home and in countries of asylum in Syria's neighbouring countries, began a new journey by making their way to Europe through Belarus, despite fraud and scam that some of them have recently been exposed to. However, the economic hardship, poor living conditions and losing hope for enjoying a better life from where they came from push them into adventure and following dreams of change.


Do all roads lead to Belarus?

Despite the many forms of deterioration in the lives of Syrian refugees in neighbouring countries, the economic conditions of the Syrians inside remain the most severe and difficult, but they all shared a common destiny in the search for a better future.

Basil Rayhan (a pseudonym for a Syrian engineer, 35 years old), who arrived in Belarus from Damascus about ten days ago, told "Rozana" that he was able to enter officially and easily, as he put it, after he went to Minsk (the capital of Belarus) on an air flight for 400 $, in exchange for a tourist visa and an invitation from a Belarusian side, as well as a hotel reservation and air transportation. While more than 100 Syrians who arrived in Minsk last week from different destinations, including Damascus and others via Beirut and Istanbul, were stranded waiting to take visas at the airport (which costs about $100) but in vain.

Rehan added that he obtained a regular visa and an actual invitation from the office that he dealt with. It is one of the few dredible offices that work with Syrian immigrants who are still detained at Minsk airport because they received unauthentic invitations to enter the country, hoping to leave it for European asylum countries (Germany being the most wanted).

The aspirations of some Syrians differ from their peers seeking to reach Europe, especially those inside Syria, most of whom resolved to head towards Arab countries such as the UAE and Egypt. Yet, the latter represents the most sought destination for Syrians in areas under the control of the Damascus government.

19 thousand technicians have left the city of Aleppo, and 28 thousand have left the city of Damascus during the past two weeks, the local press sources reported today. It indicated that electricity condition, the rise in fuel prices and other factors that raise the cost of production and the difficulty in rehabilitating factories, contributed to great burdens and affected the competitiveness of Syrian production. It is one of the factors that contributed to the migration of technicians.

The reports added that capital and project owners in Aleppo and Damascus lost hope that the situation would improve, so some of them started leaving, especially as good investment opportunities are available in other places such as Egypt, the UAE and even Iraqi Kurdistan.

Perhaps many Syrian technicians chose Egypt as their main destination, due to the freedom of markets, movement, work and open export to all countries of the world.

Muhammad Wakil, (the pseudonym of a technician from Aleppo, 58 years old), was one of the first newly arrivals from Aleppo to Egypt at the end of August. He told Rozana that the lack of factors to boost the Syrian industry and trade in the country is what drives many technicians to immigrate, "each according to his business and budget, some of them go to Egypt and some to Iraq, even if only a small percentage, in parallel with those who went to the Emirates with the largest financial burdens."

He indicated that the cost of his transfer to Egypt did not exceed a thousand dollars, which included visa, personal transport, luggage and full equipment.

The concerns are different, the result is the same

A urgent question raised by the new wave of Syrian immigration is how possible it is to seriously activate ways to return Syrian refugees in regional and European countries of asylum to their country, which they left successively ten years ago.

This question was raised by Rozana to the United Nation Higher Commissioner for Refugees (UNHCR) is whether the already unstable conditions will worsen in the coming period for the old Syrian refugees, some of whom rushed to change their place of residence after the decline in financial support provided to them, and the poor living conditions in their guest countries, such as Lebanon and Jordan Turkey. But we did not receive a response regarding that.

Identical sources in international non-governmental organisations working in joint projects with the United Nations, to provide aid to Syrian refugees in neighbouring countries, explained to "Rozana" that in light of the Coronavirus pandemic and the protracted Syrian crisis, the failure of donor countries to fulfill their financial obligations to the United Nations and its partners led to a decline in services. It also resulted in a lack of financial and food aid granted to Syrians in parallel with the decline in job opportunities for Syrians there, such as the dismissal of thousands of Syrian teachers in Turkey, in addition to the continued decline of the Lebanese economy, and the difficult living conditions of a significant number of Syrians in Jordan.

In Lebanon, the Syrians there continue to suffer poor living conditions in light of the stifling economic deterioration in the country and the almost total inability of the United Nations High Commissioner for Refugees to provide financial resources and job opportunities that sustain the lives of many Syrians there.

Perhaps what sheds light again on the worrying situation of the Syrian refugees there are the statements attributed to His Beatitude Patriarch Bechara Al-Rahi, which he made on the Vatican Radio in Budapest, last week, in which he called for the forcible deportation of Syrian refugees from Lebanon, to be added to the list of increasing restrictions Syrians face.

Meanwhile, Syrian refugees in Jordan were surprised by the decision of the United Nations World Food Program (WFP) to suspend or reduce food aid for them, starting last July.

These messages angered the Syrians, especially as they came as many of them lost their jobs because of the Coronavirus pandemic, which is still ravaging them.

Ibrahim Abu Joud lives with his wife and two children in Irbid Governorate (Northern Jordan). He works as a volunteer with civil society organisations operating there, with a monthly wage, barely covering the daily basis, and does not exceed 225 dinars (315 $), in addition to 60 dinars (85 $), a monthly aid from the WFP, which he can cash through an ATM, as he told Rozana.

He adds that about six years ago, he requested visits from the UNHCR to re-evaluate his family's situation in order to re-evaluate the financial aid granted to them. But they did not respond, stressing that he did not receive any contact from the WFP, and wondered about their mechanism of evaluation.

Cutting and reducing aid puts Syrians in front of difficult and limited options in light of the current economic conditions, as Abu Joud confirmed to "Rozana" that the thought of returning to Syria has crossed the minds of many Syrians in some Arab countries, or the illegal immigration through European countries next to guest countries that received Syrians over the past years.

Whether because of the significant decline in support for Syrians in neighbouring countries, or for reasons directly related to their working conditions, as in the case of the thousands of Syrian teachers who have been expelled from Turkish schools, the goals of many Syrians there converge to reach Europe via Belarus. From there, they travel overland to Poland, then to Germany, or through Lithuania. They risk their lives to reach Western European countries. As they are looking for a decent life that offers them respect for their education and the opportunities they can offer to the European societies they seek to integrate into. This is rather than ending up in places that offer them no appreciation or interest in their skills, according to some Syrians interviewed by Rozana, in Turkey, Lebanon and Jordan.

According to media reports, more than 9,000 Syrian families in Turkey (headed by detailed Syrian teachers), are now threatened by hunger and homelessness, and threatened in their safety and security, after thinking about returning to their areas controlled by the Damascus government has become one of its options to continue living within the minimum requirements or to emigrate to Belarus and face the risk of being imprisoned for five years and a heavy fine if they are arrested at the Polish-Belarus border.

With the issuance of the decision to dismiss thousands of Syrian teachers early this month, the United Nations Children's Fund (UNICEF) announced the end of its program to support Syrian teachers working in Turkey, about 5 years after the start of the project "Integrating Syrian Students into the Turkish National Curriculum” that was supported by the European Union Commission under the supervision of UNICEF and the Turkish Ministry of Education.