Algeria: Syrians, Including Army Defectors, are to be Deported to Syria 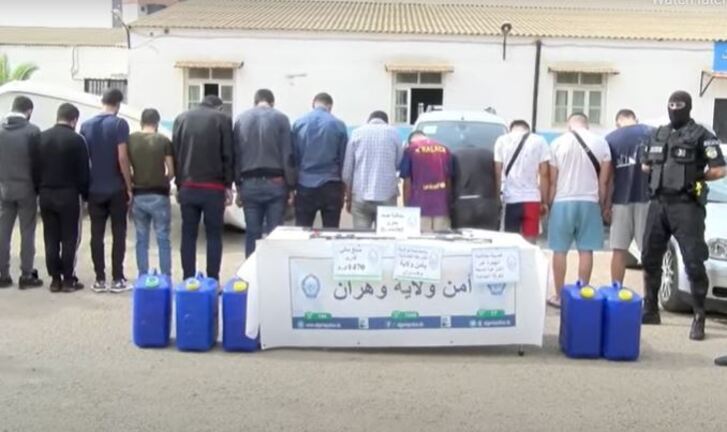 "My friends and I were arrested a week ago while we were on the beach of Ain El-Turk in the city of Oran, northern Algeria. We were tired and afraid of being deported to Syria," Samer (a pseudonym) called the United Nations and humanitarian and human rights organisations to step in in order to prevent their deportation.


Samer, one of the people arrested by the Algerian authorities at 7 pm last Friday, while he and his friends were on the beach in the Ain El-Turk area, drinking coffee at a table, in the city overlooking the Gulf of Oran. "They took all our things, including our mobile phones and passports," he said to Rozana.

Samer added: "The Algerian authorities arrested us because we were foreigners on the beach. They charged us with attempting to travel illegally based on pictures and recordings of us that the media circulated as pictures of illegal immigrants."

As the authorities allow detainees to carry mobile phones, "Rozana" contacted Samer on Wednesday, and he is now in a prison in the Ain el-Turk area with other Syrians, after he seven of his friends were arrested by the "Anti-Illegal Immigration Faction" of the Oran State Security.

Samer defected from the Syrian regime forces more than a year ago and traveled alone from Syria to Lebanon illegally and from there to Libya by air, he has been in Algeria only for three months, where he met his friends.

Samer added: "Myself and someone else defected from the regime forces, we met six other Syrians fleeing military service in Algeria... We do not know our fate, but deporting us to Syria will be a death sentence for us."

Samer and his friends were investigated over the past few days, and on Monday they were presented to the Ain el-Turk judicial court in Oran. “The judge acquitted us with an unpaid fine of 100 euros.”

After leaving the court, Samer and his seven friends were transferred again by the security forces to the same prison where they were under the pretext of handing over their possessions, to be arrested again. He says: “The authorities took our names again, we could keep our phones, but they took away our passports, then they transferred us to another prison.

Samer confirmed to "Rozana" that they were forced to sign and fingerprint papers without knowing its content, and added, before standing before the court, prison security members told us that the authorities will send our papers to the consulate of the Syrian regime, but we did not take it seriously, and when they arrested us again, we started to think it might happen.

“Now we are afraid that we will be handed over to the regime’s consulate if our papers are actually sent to it,” Samer says, in line with previous statements by Algerian Interior Minister Noureddine Bedoui, in March 2018, in which he said that returning migrants is takes place at the request of their country of origin.

“We received information from the prison that a number of Syrians were forced to fingerprint and sign their deportation papers to Syria, but after appeals from human rights organisations, the deportation was stopped in 2018,” Samer says.

On Monday, the " Consolidated Unified Rescue" group appealed to humanitarian organisations to urgently intervene to release the detained Syrians prior to their deportation to Syria.

Algerian media published a picture of Samer and his friends and a number of other people of different nationalities, after their arrest as he told "Rozana", when the media reported, on Monday, that Oran security arrested organised illegal immigration networks, 14 Arab snd non-Arab people were found yo be affiliated, whose ages ranged between 18 and 30 years, explaining that the networks are working to smuggle people person for up to 75000000 Algerian dinar ($5500).

Algeria is a party to the UN refugee conventions and the Convention Against Torture, and is bound by the principle of non-refoulement, which prohibits the forced return of anyone who may face torture or threats to their life or freedom.

The Convention relating to the Status of Refugees prohibits the state party from expelling any refugee in its territory in an orderly manner, except for reasons related to national security or public order.

In early January 2019, the Algerian League for the Defence Human Rights (LADDH) published a report that mentions the Algerian authorities' deportation of 50 Syrian and Palestinian refugees to Niger in late December 2018, after they had been detained for months.

The association explained, at the time, that the group entered Algeria from Niger through the land border with forged passports, and they were sentenced to two months in prison, after which they were deported due to suspected terrorism.

The Algerian Ministry of Interior linked the decision to deport Syrians to Niger to protect the security and stability of Algeria, after reports accusing the government of deporting refugees.

The migration official at the Algerian Ministry of Interior, Hassan Qasimi, said, in early January 2019, that Algeria "received more than 50,000 Syrians for humanitarian conditions, but when some of these migrants become a threat to the stability of the country and threaten its security, Algeria is required to act," according to the Algerian TSA Arabic newspaper.

Among these moves is what Human Rights Watch (HRW) documented in its report issued on 9 October 2020, in which it indicated that the Algerian authorities have expelled more than 3,400 migrants of at least 20 nationalities to Niger since the beginning of the year, including 430 children and 240 women, according to humanitarian organisations in Niger, thus, the number of people expelled to Niger during the first ten months of 2020 exceeded about 16 thousand people, half of whom were Nigerians handed over to the Nigerian army, while others of mixed nationalities were left in the desert near the border.

HRW also documented deportations of migrants from Algeria between 2016 and 2018 that involve physical abuse, some of which include beating refugees with batons and using tear gas. The authorities expelled about 25,000 migrants to Niger in 2018, and another 25,000 during 2019.