In Heinous Vonditions ... Petroleum Engineering Faculty in Homs Turned into Mandatory Camp for IDP’s From Rukban 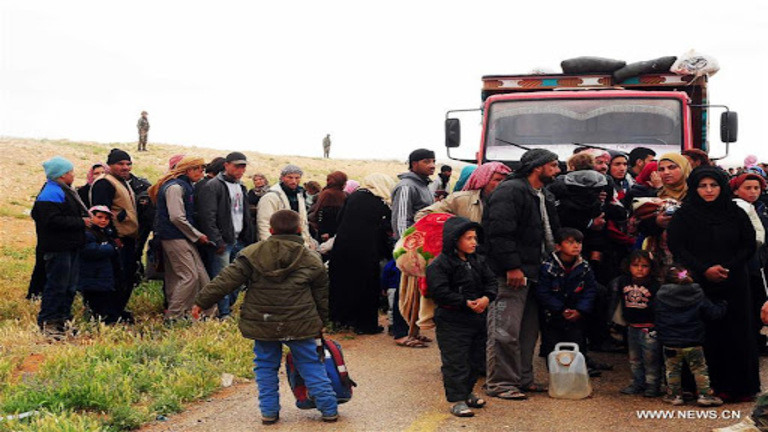 The Syrian regime has transformed the Faculty of Chemical and Petroleum Engineering (Petrochemical) in the city of Homs into a “collective prison” under the name of a “refugee centre,” in which the 900 displaced families of the Rukban camp, who left in 2019, live.


The displaced people living in the refugee centre are suffering a tragedy, which they describe as worse than what they experienced near the border triangle with Iraq and Jordan.

Numerous testimonies said that a significant number of young people from Homs countryside were forced to perform compulsory and reserve military service within the ranks of the regime's forces, in addition to the fact that some families from the towns of Al-Qaryatayn and Mahin returned home after paying varying amounts of money to influential members of the security force, as the required fees to allow the passage of one family exceeded one million Syrian pounds.

The displaced families were allowed to return after forcing them to spend a whole year in the shelters located in the schools of Qusur and Bayada neighbourhoods and the Petroleum Faculty in Deir Baalbah in the governorate of Homs under the pretext of examining their behaviour and observing their conduct. Later, two schools in Bayada and Qusur were evacuated of the displaced, and the rest were transferred to live in the petroleum college centre.

On the other hand, the people of Palmyra and Sukhna have been detained to this day in the petroleum college shelter due to the Iranian-influenced factions’ seizure of their homes and properties.

Leaving the shelters after obtaining a limited duration permit!

There are strict directives that limit the movement of displaced people inside and outside the shelter, as they are denied access to the outside world under extensive security restrictions. The camp inhabitants cannot enter or leave except to get their necessary needs, emergency medical interventions, to purchase medication, or for work obligations, in exchange for detaining their families by the security forces to ensure their return.

The displaced families are granted exit clearance after the completion of complex procedures that start with submitting an application and waiting for a response with conditional approval for a period of time; while being subjected to a thorough search upon their return to the shelter through two checkpoints outside and inside the building. If any of them fails to return in time, they are held accountable and imprisoned inside the centre and prevented from leaving for a long period of time. Men are sometimes subjected to violent beatings and insults.

In Palmyra, two young people of the Abbara family were killed while trying to escape from the shelter in Deir Baalba neighbourhood, when intelligence agents shot them on 14 April 2019.

Batoul.Y., a woman from the eastern countryside of Homs whose husband died during the war, told Rozana that she was released from that prison after she paid the sum of 700,000 Syrian pounds that she obtained by selling the last piece of her jewellery to leave with her children.

The refugee stated: "Life inside the petroleum college shelter is almost non-existent despite Red Crescent supervision, but it is a limited supervision. We were harassed by the security forces, and sometimes they beat and insult us if anyone dares to violate their orders.”

She continued:  “I lived, like the rest of the women, a life of fear of the brutality of the Air Force intelligence officers, who oppressed us especially last year under the pretext of the coronavirus pandemic, as they detained everyone for three consecutive months, during which no was allowed to go out, amid a serious lack of healthcare services and sterilisation materials, as visits of the mobile clinic of the Red Crescent took place once every month instead of being on a weekly basis.”

The shelter also suffers from a severe lack of services, due to the scarcity of water resources which are pumped into a community of no less than 2,000 people in one place, in addition to the fact that the quality of electricity supply is the worst in the entire governorate.

Suleiman Abu Kamel, a man in his sixties, from the city of Al-Qaryatayn (eastern countryside of Homs), who is also one of those who have left the shelter, said: “I got out of there with my family with the help of an influential person affiliated with the Air Force Intelligence, after I paid him one million Syrian pounds. I did not stay voluntarily in that centre.”

Abu Kamel also asserted that "the services and health care situation there is getting worse every day. They (the refugees) wash every 10 days because of the scarcity of water, not to mention the sewage that floods the bathrooms due to frequent dysfunctions. As for the electricity, it was cut off for days under the pretext of outages, and if they supply the centre with power, it would not last more than three hours a day, and the conditions are even worse in the winter. Bread has also been severely missing (in the shelter)."

Despite the fact that most of the residents of the petroleum college shelter come from areas controlled by the regime forces, in addition to the repeated security reports on each of them, the regime members refuse to release any of the displaced unless they pay them.

The number of people that had left the camp at the time is estimated at about 13,500, most of them are women and children. Thus, the number of returnees decreased last year, and this year hardly anyone has ever gone home.

The regime arrested more than 133 people at that time, although the arrestees had their status regulated in the settlement centre affiliated with the Military Security Branch in Badia (Palmyra). Afterward, they were referred to terrorism courts, and from there to the Sednaya Military Prison.

It is noteworthy that on 29 December, 2012, the regime forces took over the building after storming the neighbourhood and displacing the people of the area, and turned the Petrochemical College into a headquarters for security forces used for torture and temporary imprisonment.