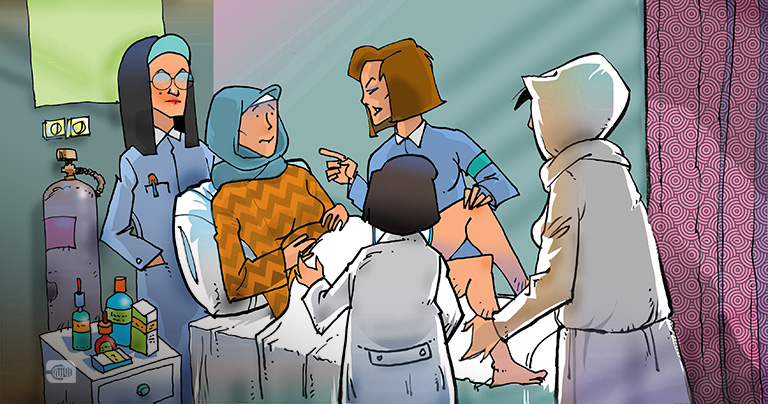 "They put me in a wheelchair and I was very tired. My child was without clothes and wrapped in an elderly diaper. I will never forget this cruel experience and pain."


Mona (a pseudonym) went into the hospital suffering from premature delivery, and upon entering the labour ward, she was surprised by the bad treatment, both in terms of the rapidity of the medical staff response and the quality of vaginal examinations that are usually carried out before and during delivery.

Mona says that the doctor was not present during the delivery and that only the midwives and nurses were in the room. They cut the perineum immediately without waiting, which led to a haemorrhage that was difficult to stop.  After great suffering, a doctor was called to intervene to save the patient, but the story did not end there, as Mona stayed in the hospital for three days due to an infection that occurred to the lack of sterilization.

It may be surprising to any of us to know that about half a million children are born every day, and many consider that all women in the world give birth and are treated the same. Yet it may be shocking to know that a great amount of violence is practiced behind the doors of delivery rooms. Many women who dreamed of embracing their children have experienced violence in the delivery room.

Women may not even know that they are being subjected to real violence.

Rozana tried to monitor some of these cases, and after receiving many complaints in this regard, the foundation decided to widen the circle of interviewed women to get clear answers.

Rozana created a random questionnaire to which more than 750 women responded, after it was distributed mainly in six Turkish states.

The questionnaire revealed that the percentage of women who gave birth in public hospitals reached 84.1 percent.

On the other hand, the percentage of women who experienced violence in the delivery rooms reached about 80 percent, as the forms of violence varied between verbal abuse at approximately 50 percent, physical ill-treatment  at 8.5 percent and both at 41.5 percent.

How can women defend themselves?

Lawyer Afaf Al-Rasheed stated that the notion of violence in delivery rooms is a globally observed phenomenon and is not specifically inflicted on Syrian women on the basis of nationality. Hence, Turkish women also suffer from this type of aggression. However, the lawyer points out that the Syrian refugees' knowledge of their rights granted by the Turkish state makes it easier for them to file legal complaints against these practices.

While 87.5 percent of women believe that the violence against them is due to their nationality, only 59.7 percent of aggressed mothers speak Turkish.

Article 16 of the Turkish Constitution guarantees the right to a decent life and protects the human rights of all those on Turkish soil without exception.

The lawyer asked women who are about to give birth, if subjected to violence, to go directly to the hospitals' legal office when the incident occurs and file a complaint immediately.

Al-Rasheed urged the victim to document the incident, either by recording an audio or a video, or by asking her companions to be present to testify to the violent practices she was subjected to, so that the abused woman could file a complaint in court.

She also recommended obtaining a medical report documenting the damage inflicted on the woman as a result of the violence she endured, in addition to the possibility of taking legal action through a lawyer, with the need for evidence and proof such as eyewitnesses, or audio and video clips, or a medical report confirming the physical effects of violence and other abuses.

According to the responses to the questionnaire, the percentage of physical violence practiced against mothers in delivery rooms were distributed as the following: 26.1 percent were slapped, 34.7 percent were punched and 39.2 percent were hit on the abdomen.

One of the respondents testified that during her two deliveries in a public hospital in Bursa “I was slapped and they shouted at me to stay silent during labour. They also pressed my abdomen and prevented my mother from entering.”

Another woman said: "Even the animals feel pain during labour and shed tears, but the nurse put her hands over my mouth so that she would not hear my screams during the natural birth.”

Turkish journalist Celal Demir recommended calling the Ministry of Health's number 138 to file complaints and provided information during the episode on how to file a complaint to the relevant authorities about these violations.

Many women complain of the violation of privacy in delivery rooms, with the lack of separation curtains between the beds, as well as frequent vaginal examinations. Dr. Reem Istanbouli says in this regard that the repeated hourly examination of the patient is the normal routine in the early stages of labour, which can sometimes take 24 hours, and can reach the limit of one examination every half hour in the final stages.

The doctor added that the uterus, even in the case of a caesarean delivery, needs to be prepared before it reaches the operating room, and here some women feel that they are neglected and exposed to pain for long periods.

“During my first delivery, I was exposed to verbal abuse, as they screamed at me and I was subjected to extreme neglect and cruelty for a month after giving birth. I was mentally worn out, I could not sleep and my wound opened and got infected because the wound was wide. It took me two months until my condition improved.”

I felt a knife cut in the surgery room

Samia (a pseudonym) was transferred to a university hospital as a result of her special condition; as she is a diabetic and was urgently due to deliver.

She stated: “They dressed me in the hospital gown, but I waited at the operation room’s door for more than three hours and it was cold, and then they brought us into the room, but once again the number of residents was large.”

The woman was in an embarrassing and uncomfortable situation that violated her privacy, as the surgical gown was taken off and she was completely naked in front of them. The most painful experience was the failure of spinal anaesthesia, which was tried more than once.

Samia said more than once that the anaesthesia did not work, but they did not believe her pain and started the surgery. When she moved her feet in pain, they put her under general anaesthesia. After being taken out of the surgery room and transferred to intensive care, she was given special food for the hypertension patients, although she is diabetic.

Dr. Reem Istanbouli said that a certain test must be performed to make sure that the spinal anaesthesia has succeeded before starting the surgery, by asking the patient to move her leg for instance, adding that the doctor usually makes the decision to cut the perineum under local anaesthesia, and the sutures must be very neat so as to prevent any problems later.

According to the women who answered the survey, 68.5 percent had problems after giving birth due to wrong medical procedures.

The doctor emphasised the importance of the presence of a companion during the examinations, in order to guarantee the rights of both parties (the patient and the doctor).

One of the respondents complained when we conducted the survey saying: "After the baby was pulled out, I stayed in the birthing chair for a while. They did not remove the placenta or make stitches. They helped three other women give birth after I delivered, and then they came back to me and dressed the baby. They finished everything while I was still seated on the birthing chair. It was total negligence."

Out of 69.5 percent of the women who had a companion during the delivery, 18.6 percent were nonetheless subjected to violence, according to the survey answers.

“In mpy experience, I was subjected to violence in the delivery room..a forced delivery. My labour contractions were mild. She was screaming at me and telling me to push harder, but I did not have any cramps. The nurse shouted at me again and sat on top of me. I lost my breath and felt as if my whole body was getting loose as she pressed my belly down. When the mask falls slightly, she would yell at me, cover my mouth and fix the mask. It was a forced delivery; my thighs were blue when I gave birth because she was pressing them so hard.”

Women’s rights in the delivery room

The United Nations defines the rights of women during childbirth in accordance with international standards, in several points, namely:

1- The medical service provider (hospital, maternity centre, doctor or nurse) does not have the right to compel the woman to undergo a medical procedure without her consent, even if this would affect the life of the foetus, and for its part, the hospital can refuse to provide the service in this case.

2- The doctor must inform the woman of the medical procedure that is being taken, and make sure that she fully understands it.

3- A woman has the right to refuse a specific doctor or nurse, and to request that he/she be replaced by another.

4- The medical service provider cannot use baby formula or natural herbs without the consent of the mother.

5- The woman has the right to speak to the hospital administration to report any violation she experienced in the delivery room.

It is not possible to reduce this phenomenon unless there are actual legal moves towards holding the abusers accountable, or at least changing the practices within the delivery rooms through developing the administrative structure and monitoring as well as considering the violence practiced as an important issue that needs to be addressed. Since giving birth to another human being is one of the most important moments in the life of humans, it would be unfair for the mother to be subjected to all this violence during such a special moment.
This journalistic material was produced with the support of Journalists for Human Rights (JHR) and funded by Global Affairs Canada.