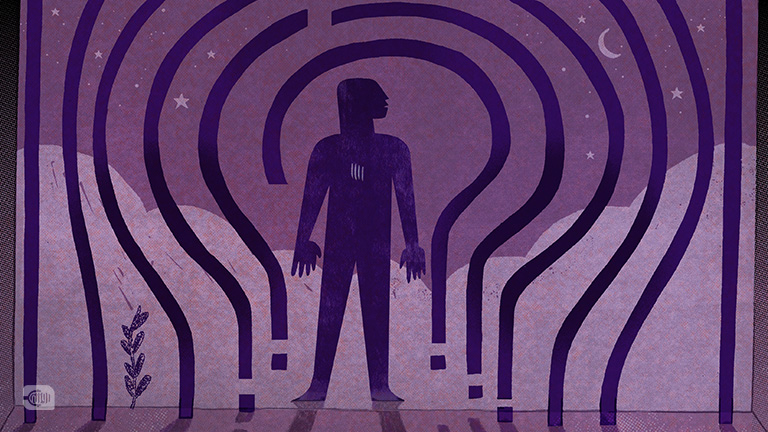 In Arnous Square, at the entrance to Al-Salhiya market in Damascus, several women sit practicing fortune-telling. Mothers turn to them to find out about the conditions of their loved ones who have been missing in prison for years.


Hope becomes in the hands of these fortune tellers who are scattered in the corners of the garden, and as soon as a person passes by, they start shouting "Seer, Seer,” hoping to attract the client they aspire for.

Umm Yahya sits embracing her three-year-old daughter in Arnous Square, centre of the capital Damascus, waiting for a fortune teller who, as the woman was told, was wandering around the area after coming from the desert of Homs, an area that was then controlled by ISIS.

The name of this fortune teller is Safia. She is a gypsy woman in her early fifties, who goes to the square in search of clients, who are curious to know what the days reserve for them and want to read their fortune after they were overwhelmed with despair and went on seeking any way possible to restore a glimpse of hope in a lost path of salvation.

Fortune-telling, by reading the palm of the hand or the residues of coffee in a cup, is a habit that some Syrians are accustomed to, as they try to divulge the unknown and the hidden, hoping for better life chances on different economic and social levels.

The new reality in Syria has changed the preferences of Safia’s usual clientele, and instead of the usual inquiries about potential suitors and information about money amounts offered by the unknown, the demands became more linked to those women’s search for their absent relatives (forcibly disappeared) in the regime prisons after failing to hear from them, either by paying bribes to brokers and lawyers, or by taking legal paths through hiring lawyers, waiting for the judges’ verdicts and incurring more financial burdens they do not need.

As soon as the fortune teller Safia arrives at the place she got used to working in for the past three years, several women from different Syrian governorates and cities gather around her; and although they all seem tired by the effect of displacement and the bitterness of war, they are eager to hear any news about their missing relatives. Their feelings of exhaustion vanishes when they hear a word of reassurance from Safia about their husbands and sons whose "fate is unknown" and they know that they are still alive and that they will return soon in various ways, clarified by Safia when she reads the coffee cup of each of those desperate women.

Journey behind the sun

Since the eruption of protests in Syria, the regime prisons have been filled with thousands of detainees, according to the records of human rights organisations that monitored the popular unrest, with the aim of "breaking the demonstrators’ spirit" and to limit the expansion of the disobedience diameter opposing the central regime in Damascus. Therefore, the number of administrative detainees, prisoners, and forcibly disappeared persons, jammed together in detention cells, has increased dramatically.

Despite the contradictory statistics about the numbers of missing persons and the lack of precise estimates due to the variety of conditions of detention and disappearances, the available figures announced by associations and organisations concerned with the cases of detainees and missing persons in Syria since 2011 remain “discretionary,” amid tight secrecy measures from the regime’s part about the real number of prisoners and the conditions of detention. 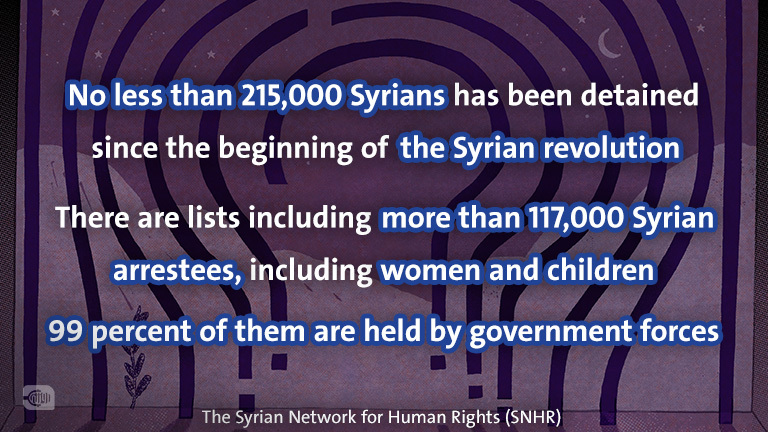 Umm Yahya, who has been searching for her missing husband since 2013, said: "I was displaced from the town of Al-Muhasan in Deir ez-Zor to Damascus after being targeted by the regime army fighter jets in 2013.”

She added: “On the way to Damascus, my husband, who was 38 years old at the time, was arrested at the Harabish checkpoint in the city, and since then our attempt to find him went in vain.”

The family was forced to sell a plot of land to secure a sum of money for a number of people who promised to reveal the husband’s location, but their endeavour failed.

Umm Yahya continued: "After leaving Deir ez-Zor, we chose to live in Damascus in one of the houses in Naher Aisha neighbourhood, south of Damascus. One time a woman told me to go to the fortune teller Safia, who became famous, and sits daily in Arnous Square. I did not mind doing so, especially as the fortune teller does not demand a particular sum of money, as I was told."

Umm Mohammad does not believe fortune tellers and clairvoyants, as she is fully aware of the hadith which says: "Whoever goes to a fortune teller and asks him about something and believes him, his prayers will not be accepted for forty days." However, she felt remorse after her friends urged her to go to a fortune teller as a last resort to find out some news about her absent son.

Fortune telling … The last resort to track the missing

Umm Salah, who is from the town of Mhajjah in Daraa, responded to our request. She came from the countryside of Damascus in search of her son Abdel Hakim, who has been arrested from his work at the TAMICO company in Damascus since 2014.

Abdel Hakim's mother inquired about her son’s fate in all security agencies in Damascus, but "in vain," she said.

Umm Salah and Umm Yahya are not the only women who resorted to fortune tellers and seers as a last solution after exhausting all available options.

We met Umm Mohammad who lost her son at the 4th Division security checkpoint at the entrance of Al Moadamyeh two years ago.

She does not believe fortune tellers and clairvoyants, as she is fully aware of the Hadith which says: "Whoever goes to a fortune teller and asks him about something and believes him, his prayers will not be accepted for forty days." However, she felt remorse after her friends urged her to go to a fortune teller as a last resort to find out some news about her absent son.

Umm Mohammad actually went to astrologers in search of him, but her attempts went in vain so far, as there is no news about her missing son since 2013. 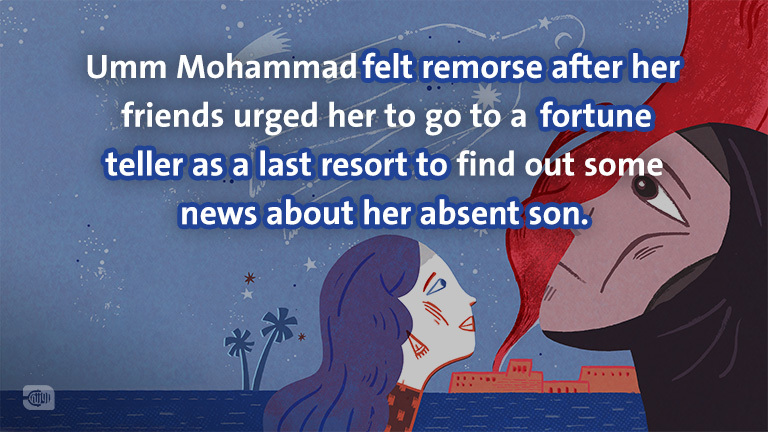 When will the missing return?

You are lucky if the fortune-teller Safia devotes some time for you to explain the nature of her work and the type of her day-to-day clients or those who visit her from different regions, as she is busy talking to the women surrounding her and answering their endless questions.

At the end of one of her fortune telling sessions and on her way to Marjeh Square, which has turned into the largest gathering of displaced people in the centre of the capital, she said: "The fortune-teller must adhere to a number of things before starting the reading, the most important of which is to refrain from reading fortune on Friday, otherwise the seer will be deprived of her gift."

In answer to the most important question, which is “when will the detainees return?” Safia explained that "this can be shown through the dots that appear inside the coffee cup, which accurately indicate the number of days and weeks."

She stressed that reading the palm of the hand is one of the most prominent ways to know the fate of missing persons and the forcibly disappeared during this period.

The journey in search of hope in the survival of the detainees is one of the most difficult and exhausting quests for those women. In order to debunk the allegation of Safia and the rest of the fortune-tellers, we invented a fake story and asked them to reveal the fate of one of the detainees.

Samar (a pseudonym) went to the square under the pretext of looking for someone to tell her news about her hypothetical brother, who has been in prison for a long time, and she chose the fortune teller Umm Khalil to ask her.

Samar and the fortune-teller sat on the grass. Umm Khalil put seashells in her hands, shook hard, and then threw them on a piece of cloth. Afterward, she started her usual talk about an evil eye that affected Samar and a woman who is trying to scheme against her and her husband.

Samar stopped the fortune teller and told her that she wanted some news about her brother Ali, who had been kidnapped three years ago.

Umm Khalil changed the subject from talking about the evil eye haunting Samar, and went on reassuring her about Ali's fate and told her that he is in a safe place and he will return safe and sound.

Listen to the dialogue between Samar and the fortune teller

The four weeks deadline that the fortune teller gave to Samar, promising her to receive news about her hypothetical brother afterward, had passed. Hence, this fake hope cost her 10,000 Syrian pounds.

Thousands of Syrians who have lost contact with their loved ones due to arbitrary detention or forced disappearance fear that they will never seen them again, which makes them “clutch at straws,” according to lawyers and human rights advocates who plead in the courts and help families find their missing relatives, especially after the emergence of more than 50,000 photos showing detainees killed under torture.

Amid the absence of UN oversight on this file and the prevention of international organisations such as the Red Crescent and the Red Cross from inspecting prisons and the health and psychological conditions of the detainees, the fate of prisoners remains ambiguous.

Some families were stricken when they knew about the death of their sons upon attempting to extract official documents, such as family civil registration, and others received news that their sons have died, only to be surprised by his release later on.

Sorcery, and what fortune-tellers, clairvoyants, and palmists do, along with everything in line with these methods of exploring the unknown are considered as a “disruption of public trust,” says lawyer Rahada Abdoush. Thus, legal jurists consider that “public trust is an assumed pact between members of society not to betray or deceive each other by any means of deceit."

Syrian legislation classifies this act as an outrage for which a whole chapter in the Syrian Penal Code is dedicated. This act is considered a violation of public trust according to Article 754, which stipulates punishing the perpetrator with discretionary imprisonment of up to ten days, and the penalty is aggravated in case of repetition to reach six months with the imposition of a fine. If the perpetrator is a foreigner, he /she will have to leave the country.

The lawyer stressed that in order for the practice of fortune telling and astrology to be considered a violation of the law, it must be accompanied by gaining material profits.

However, she confirmed that these practices remain out of the scope of accountability or punishment because no one goes to court to sue fortune tellers because they are needed, which makes this profession present in society till this day.

It seems that the activity of fortune tellers in Damascus and people’s eagerness to go to them will not end any soon as long as the arrests and forced disappearances continue, the legal and official ways to reach missing and forcibly disappeared persons are disrupted, and the parties responsible for the detention of Syrian citizens continue to deny their presence in the detention centres.

This project was carried out by means of cooperation between the Rozana Media Foundation and the Syrian Investigative Reporting for Accountability Journalism (SIRAJ).