On the Day of Elections... the Alawites Ask Al-Assad, Who You Will Use Now to Continue the Path! 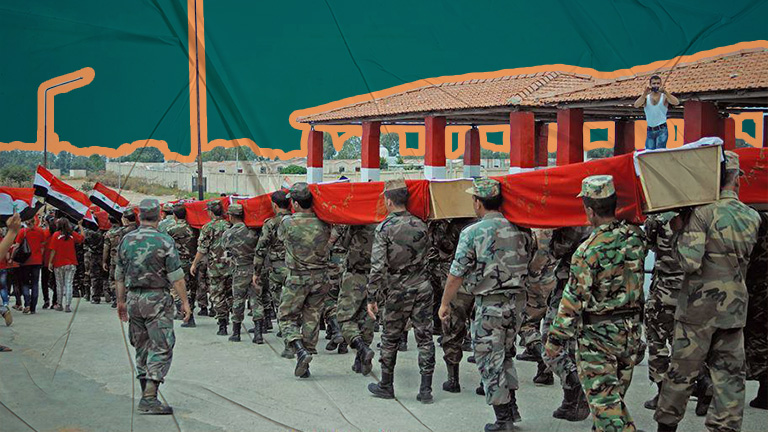 Some Syrians view the Alawites as fierce defenders of Al-Assad. However, many are not aware of the ongoing disputes between Alawite clans that led several of them to antagonize the Syrian president and avoid supporting him, even in undeclared ways.

A split within the sect!

The Alawite sect is divided into two groups, namely the Haidari (or Al-Mawakshah) sect, which is based north of Latakia countryside, and Kalazi sect, the sect to which head of the Syrian regime Bashar Al-Assad belongs, and it is also split into several clans. 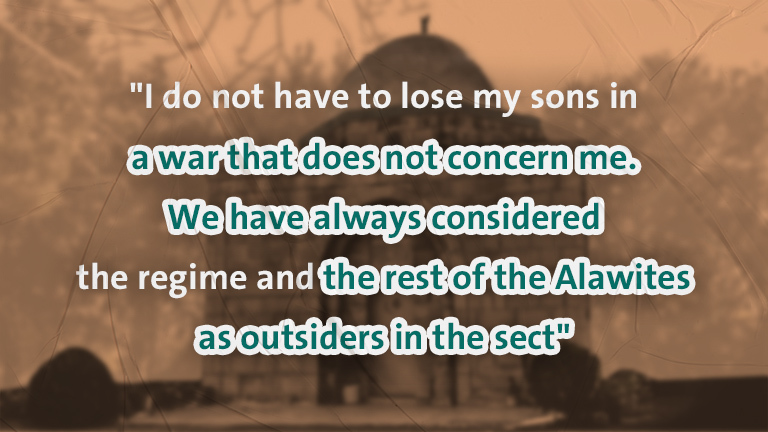 Masoud, a Syrian citizen in his fifties who belongs to the Haidari sect, smuggled his three sons out of Syria for fear that they would be forced to serve in the military. He says: "I do not have to lose my sons in a war that does not concern me. We have always considered the regime and the rest of the Alawites as outsiders in the sect." [1]

Feelings of hostility towards the ruling regime were not limited to members of the Haidari sect only, as many Alawites of the Kalazi sect also opposed the regime of Al-Assad the father and then the son. However, ideological differences that accumulated since the time of the French occupation have led to a deep rift between the two religious groups, who rarely engage in mutual social ties (like marriages) or share interests.

In the same context, Masoud indicated that “this war is Al-Assad’s war alone. He is the one who started it and who pushed the Alawites into it, and as long as the majority of the Kalazi sect insist on supporting the president, I will not participate in the upcoming elections and many of the Haidari Alawites will do the same.”

Repudiating Al-Assad’s support is not limited to the Haidari sect. Thus, there are many clans among the Kalazi sect who refuse to support the president in the upcoming elections, even though they had to cheer for him publicly reluctantly and without an actual desire to do so, such as the clan of Ali Douba. This clan includes a large number of Alawites, who hold important leadership positions in the state, and many sheikhs of the sect.

The reason behind this grudge against Al-Assad and his political system is the fact that the president had ordered the removal of former leaders, including Douba and others who belong to the same clan.

Fida is a 40-year-old man who took advantage of his closeness to Douba and moved between several insignificant state positions. He sees that the deterioration of the Syrian regime's status was caused by removing men like Douba and his fellows; and despite the fact that Fida does not know whether he will vote for Al-Assad or not, the situation that is clear so far, because this state of indecisiveness will not led in any way to confronting Al-Assad and standing up against him.

Luay stated that “after ten years of war and losses, and the indifference of the government and the regime about the sacrifices we have made”, Al-Assad does not deserve to be supported again in the next elections, and “insulting him day and night is the least we can do to appease our anger.”

It is worth noting that the regions of Demsarkho and Al-Da`tour suffer periodically from the deterioration of basic services, and amid the state’s carelessness the locals find themselves forced to take the matter into their hands through harassment, robbing travellers on the roads, intimidation, etc.

"It is your turn doctor”

Ten years later, it did not occur to the Syrian regime to find slogans like "It is your turn doctor" painted on the walls of several villages in the Jableh countryside, in addition to other anti-regime expressions that the authorities started hear or see since beginning of the year, which made them worry over the possibility of losing the regime’s popular incubator, especially in the run-up to the presidential elections.

Majid, a young man from Jableh, who does not identify with any political trend, wants the current crisis to end, so that the situation can ameliorate if Al-Assad leaves office. Majid noted that the appearance of slogans from time to time insulting or inciting against Al-Assad in the villages of Jableh is nothing but an indication of the dreadful condition of the area and people's desire for change and to be able to choose a new option other than Al-Assad.

Majid and other young men are no longer happy with this situation or with Al-Assad’s reign over the Syrian state, which terrifies the regime, given the high probability that those people will either participate in the elections nor vote for the president. 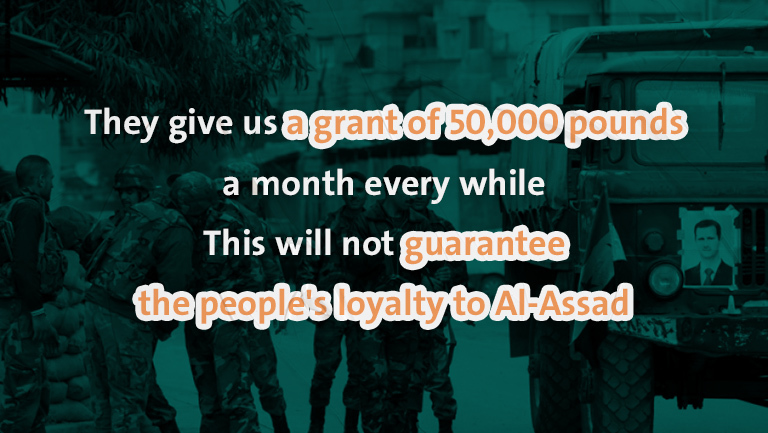 "They give us a grant of 50,000 pounds a month every while," said Abu Ali, a 60-year-old pensioner who depends on his pension to live.

Abu Ali stated: “Giving us monthly grants is both provocative and shameful. This will not guarantee the people's loyalty to Al-Assad." In his opinion, if the regime authorities want to bribe the people, they should feed them properly or give them a decent amount of money, not this grant which is not enough to cover the living expenses of half a week!” [2]

Abu Ali did not hide his desire to boycott the elections, but he is afraid to express that overtly. At the same time, he confirmed that many of his friends and peers are showing support to the regime because “they are terrified to express any kind of hostility towards the elections! Everyone is afraid of everyone.”

The Syrian pound is continuously collapsing, and the prices of fuel are constantly rising at a time when the regime's government is gradually removing fuel subsidies, while the Syrians suffer from rocketing prices and transportation crises. However, the regime tried hard to control the depreciation of national currency against the dollar, and recently restored part of the fuel subsidy.

Rami, a young man in his thirties, have always expressed his appreciation of the Syrian state and the president, especially after the measures taken by the authorities to control the exchange rate and the fuel prices.

On the other hand, Rami believed in a conspiracy being plotted against the current regime and the tremendous efforts that Al-Assad is making to protect his people and country from the conspirators.

Unlike Rami, Raba, who is a university student, underestimated the aforementioned mode of thinking which is centred on the belief in an ongoing conspiracy against the state adopted by many syrians. Raba, being a student in economics, knows how countries manage economic crises, and how economic empasses are created and solved. She explained that “there are many economic solutions through which the state can ease the citizens’ burden. However, the regime wants to persistently humiliate and demean them. A state like this does not deserve our participation in its elections."

Since Bashar Al-Assad assumed power he launched three election campaigns, the last of which was "Sawa" (together) campaign. The word “sawa” has become a source of provocation to the masses in Syrian, after the regime used it to label the 2014 election campaign, but worked at the same time on excluding many Syrians from the scene and marginalized every opposition voice that stood against Al-Assad.

The regime loyalists launched the slogan "Mkamlin Ma’ak” (with you until the end) for the election campaign, before the authorities chose to label the new campaign “Amal bil Amal,” (hope flourishes with work).

Duraid, a forty-year-old man who lived through the era of Al-Assad the father and the son, and like many other Syrians, he voted in past due to the nature of his work and the security restrictions that were previously imposed on everyone, insists now on boycotting “the unreasonable and unacceptable elections after all the destruction that the country witnessed,” as he put it.

"Who will they use now to continue the path?! Or it seems that they mean to kill the rest of us, because whoever supports him does not mind dying for the sake of his shoes, as for those who refuse, they will finish them." [3] 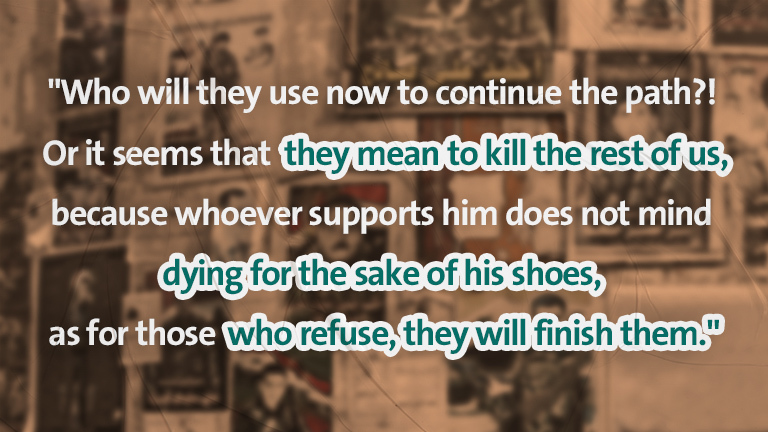 Banners and posters for the presidential race scheduled to take place on 26 May are everywhere in Lattakia, Jableh, and all the Syrian regions, inviting citizens to participate in the presidential elections, with a sense of detachment from reality, as if their participation in the elections will restore the past glory of Syria or repair the ruins and cultivate the burned lands.

A Syriatel employee told Rozana that the company gave its employees flags to participate in the marches that will take place on election day with a hint of the necessity to vote for Al-Assad, and of course the security forces have started by now to monitor state employees with the aim of exploring their intention regarding the elections and their willingness to participate in the elections and support the head of the regime.

As for Ali, a member of the Alawite sect who works in one of the Latakia state hospitals, explained to Rozana that the hospital management informed the staff verbally that leaves will be prohibited during the election period.

Hospital directors also forced resident doctors and on-duty nurses to participate in a rally to support Al-Assad on Wednesday evening, 19 May, and gave them an excuse of absence. Thus, no one was able to evade it.

According to Ali, "if the regime forces the Alawites to support and vote in its favour, then it is not unlikely to force the rest of the Syrians to do the same."