Denmark Breaks a Syrian Family.. Causing the Father a Stroke 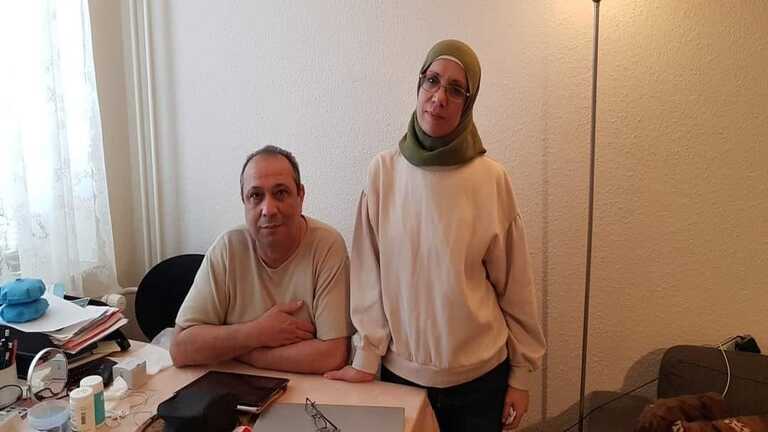 Omar Al-Natour’s left hand was paralyzed after hearing that he, along his wife Asma Al-Natour, will be expelled and forced to Damascus, while their two sons will be kept in Denmark, under the pretext that they can live safely now in Syria without risking exposure to any danger given their age.  This means that the family members will be separated with no hope in the horizon to settle their situation.


Al-Natour suffered a stroke, one month after the interview, according to which the Danish Immigration Service decided to deport them from the country, and he is currently undergoing physical treatment.

His wife, Asma Al-Natour, who was stricken by the deportation decision, says: "We are war refugees and we have to be reunited as a family in one place. My husband and I will be in danger if we return to Syria."

About six years ago, Asma al-Natour, 50, her husband Omar Al-Natour, 54, and their children arrived in Denmark as the bombing and displacement conditions forced them to leave their country several times.


After the couple was granted humanitarian protection in Denmark in October 2015, the Immigration Service informed them of the authorities’ intention to re-evaluate their immigration file in November, before letting them know at the end of February that their residence authorization could not be renewed and they may be subject to deportation soon.

Al-Natour family is facing the risk of permanent separation, said the mother told Rozana, stating that her two sons (24 and 20) would be deprived of their parents in the coming weeks if the Refugee Appeal Board decides that they should leave Denmark and return to Damascus, which has become a safe city according to the Danish government's view on the Syrian refugees’ file.

She explained, while shedding tears most of the time, that her sons were granted political residence permits because they risk being forced to join the military service with the regime's forces, which entails several legal and security implications. However, the case for her and her husband differs, due to the fact that they were granted humanitarian protection, which may be revoked by the authorities if their immigration file is re-examined; and this is what has actually happened.

The wife added that they are waiting to stand before the Refugee Appeal Board, after a Danish lawyer has been appointed by the authorities to represent the couple, under the request of the Syrian family.

Al-Natour family is originally from the town of Tafas in the governorate of Daraa. They have been living and working in Damascus. Asma Al-Natour worked as a secondary school teacher, and her husband Omar, was an employee at the Ministry of Agriculture.

The family's house in Yarmouk camp, south of Damascus, was bombed and they were forced to flee their home in Tafas (Daraa countryside). The eldest son fled to Denmark after he was summoned to compulsory military service. Thus, as the bombing intensified in southern Syria in 2014, the family did not wait until their son would submit a request for family reunification.

The family experienced a horrific escape. They walked through the Algerian desert for three days before being attacked and robbed of almost everything in Libya, and then boarded a crowded migrant boat to Europe.

Al-Natour family left via Damascus airport, without their older son who fled first to Denmark. They reached Algeria and from there to Libya, Germany, Austria, and finally settled in Denmark; while witnessing many stops and hardships during their journey.

Omar and Asma Al-Natour thought for the last few years that they were reunited with their kids under the same roof in a country that guarantees peace, freedom and justice to all its population, before facing a bitter reality triggered by an unjust deportation decision, as Mrs. Asma Al-Natour described it.

Al-Natour's family devoted a lot of effort and time to prove that they managed to integrate smoothly in the community and show their desire to build a decent and bright future in Denmark. Their situation there was quite stable, as the family reached an advanced stage in learning the Danish language, the two sons got jobs in the field of information technology, and they have been able to pay the rent and monthly bills.

The Danish authorities have recently revoked the residence permits of some asylum seekers coming from the governorate of Damascus and its countryside, and after assessing the conditions on the ground, they concluded that the Syrian capital and its surroundings are free of military operations and armed opposition factions.

The British newspaper The Independent reported in early March that Denmark had deprived about 100 Syrian refugees of their residence permits and asked them to return home, as "Damascus became a safe place now," to be the first European country to deny  Syrian asylum seekers from their residence authorizations.

Danish Immigration and Integration Minister Mattias Tesfaye announced revoking the residence permits granted previously to 94 Syrian refugees, stating in February that his country had been "open and honest from the beginning" about the situation in Syria.

Tesfaye added: "We have made it clear to the Syrian refugees that their residence permits are temporary and can be withdrawn if protection is no longer needed."

The minister stressed that Denmark “will grant asylum seekers humanitarian protection as long as necessary and when conditions improve in the refugee's country of origin, he or she will have to return to the country of origin and establish his or her life there."

This comes at a time when the Danish Immigration Service has decided to expand the areas it considers safe in Syria to include rural Damascus governorate.

The newspaper reported that the temporary protection permits granted to about 900 Syrian refugees from Damascus were re-evaluated last year, and the same may currently apply to another 350 refugees who come from rural Damascus and settled in Denmark.