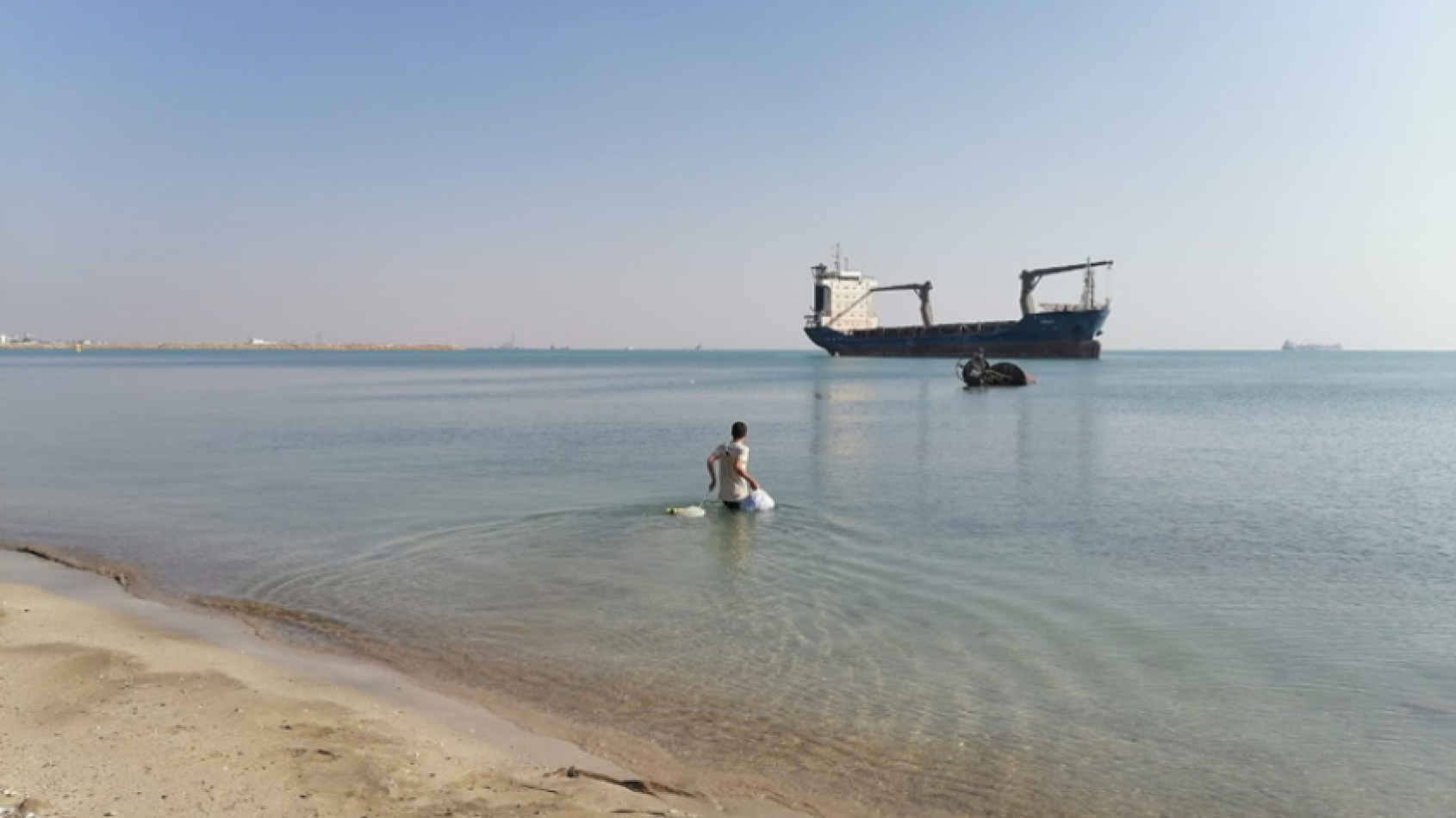 Little did the Syrian sailor Muhammad Aisha (33 years old) know that his new contract on the Bahraini commercial vessel AMAN would turn into compulsory detention, during which he would lose four years of his life across the sea and onboard the ship on his own, although his contract was only for six months.


Aisha’s physical and psychological condition deteriorated day after day and he repeatedly risked losing his life by swimming about 250 meters to the beach, to secure his basic needs (food and water).

How did the story begin?

The Syrian young man, Muhammad Aisha, started his new job on AMAN vessel in May 2017, as a first navigation officer. During the first two weeks on board, the ship moved between several ports until arriving at the Adabiya port in the Egyptian city of Suez. The crew was surprised at the time with a bailiff report to seize the ship due to unpaid debts.

The captain of the cargo, who is an Egyptian national, was not present when the crew received the seizure order, which prompted Aisha to receive it as the second-highest ranking officer after the captain.
The cargo ship was released after 48 hours and continued its trip, but returned to the same port after a few days, and that is when the Syrian young man received another distraint order.

The Syrian sailor told Rozana: “I received the first and second distraint orders and signed it in my capacity as the second-highest ranking officer in the ship, as the captain was not present on board at both occasions. The captain was Egyptian, so he was allowed to enter the Egyptian territory and visit his family. I asked them if I was responsible for anything when I received the order, and they said that it was a routine procedure. However, because I signed the order I have become the legal guardian of the cargo ship, and several days later the port authority confiscated my passport.”

Attempts to reach a solution!

When the vessel was seized in the Adabiya port, the entire crew was onboard. They tried to communicate with the ship owner, who promised them to resolve the matter and pay their dues. The crew stayed on the ship for several months, but most of them lost hope after the owner failed to keep his word and procrastinated on reaching a settlement.

The ship workers, who were Syrians, Egyptians, and Indians, started leaving the ship gradually between July 2017 and August 2019, until Aisha was left alone on board, because he was considered the legal guardian of the vessel.

He stated: "I went to the port and asked the police how I could be left here alone, who will bring me my needs of food and water. That day I faced a big problem because I was not allowed to leave the ship and enter the port without an authorization.”

The port authority ordered the cargo’s offshore agency to guarantee the presence of someone to stay with the Syrian officer and provide them with all their needs, while pledging to replace Aisha with another legal guardian within a month. However, after a few days, the person assigned to stay with Aisha left and the shipping agency stopped sending him supplies.

The cargo ship suffered water leakages twice while being anchored at the Adabiya port. At the time when the first leak occurred at the beginning of 2019, some of the crew members were present and pumped the water out of the vessel structure. However, during the second leakage in October 2019 Aisha was all by himself.

The young officer recounted: “I was all alone. I informed the shipping agency, and they said they would talk to the vessel owner who we could not reach at that time; and meanwhile the cargo started to tilt. I spoke with the shipping agency again and told them that I will leave the cargo if the situation gets worse, which I did on 18 October, 2019 and I stayed at the port for ten days. Due to pressures exerted by the port authorities, they returned me to the ship after repairing the damage and said that they will send three people to stay with me onboard. "

Muhammad returned to the cargo, accompanied by three people. The first left after a month, the second at the beginning of 2020, and the third remained with him.

A storm moves the cargo ship!

In mid-March 2020, Egypt was hit by a dragon storm, driving the ship off the Adabiya port to an area called El-Kabanoun (adjacent to the city of Suez), where it remained anchored near the shore until now.

The third person assigned to stay with Aisha kept visiting the cargo ship from the beginning of 2020 until October of the same year, then left definitively. Hence, the young Syrian stayed alone onboard for about seven months.

Aisha contacted the International Transport Workers’ Federation (ITF) in December 2020, asking for help. The ITF responded to his request and provided him with material and medical aid.

According to a statement published by the ITF on its website, the doctor who examined Aisha said that the young man showed all the typical symptoms suffered by prisoners detained in poor conditions. He is malnourished, anaemic, and complained of a pain in his legs, in addition to suffering signs of psychological exhaustion.

Aisha Rozana: "I lost about 15 kilograms. All my teeth need treatment. I suffer from anaemia, digestive problems, and many psychological issues. I have been in solitary confinement for four years."

"Let me go home. I give up all my dues. I made a mistake when I signed the distraint order, but two years have passed and you still have nothing to help me with," said Aisha, while holding the Adabiya port authority responsible for his continued stay onboard the ship and demanded them to replace him with someone else.

The Syrian sailor, Muhammad Aisha, has suffered compulsory detention and a cruel life for nearly four years. His mother died during that time but he could not bid her farewell, and his passport expired days ago as well.