Spokesmen for Syria’s Warlords Turned into Civilian Figures.. Who are They? 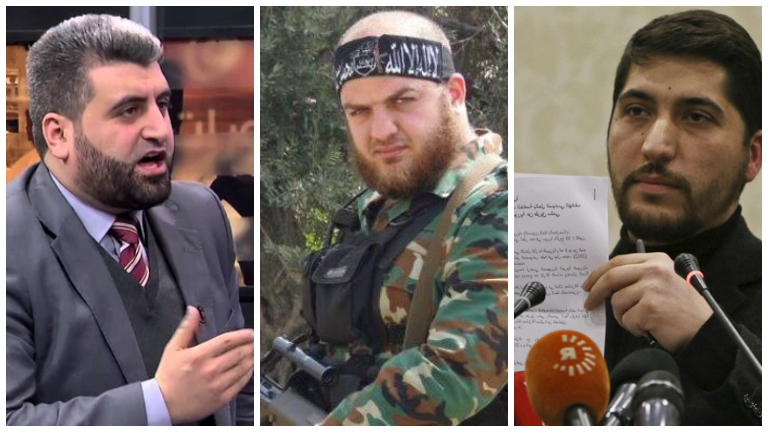 Salam Alloush, Osama Abuzeid, and Wael Alwan are pseudonyms used by Syrians who dominated the military media scene in a period prior to the outbreak of the Syrian revolution. Afterwards, they withdrew from the military framework and joined the media and research field, in a shift that was attempted to erase their past affiliation with the military apparatus, at different levels.

Majdi Ne’eme or Islam Alloush is subjected to physical torture and psychological pressure, according to allegations put forth by his family members. They posted a picture of him on Twitter showing traces of bruising and beating on the face by the French authorities who detained him on charges of committing war crimes.

In a series of tweets, Ne’eme's family said that they decided to break their silence a year and three months after the arrest of their son, because of their "confidence in his innocence," and their belief that "his absence will not be long."

Ne’eme, who is currently detained in France after entering the country with a student visa, was arrested in Marseille after human rights organizations, activists and a number of victims of the crimes, which Jaysh Al-Islam faction has been accused of committing, filed a complaint.

The complaint filed in June 2019 came after three years of documentation operations carried out by the Syrian Center for Media and Freedom of Expression (SCM), the International Federation for Human Rights (FIDH) and the League for Human Rights to prove the involvement of Jaysh Al-Islam in violations, while accusing the faction of committing international systematic crimes against civilians who lived under its control from 2013 until 2018. 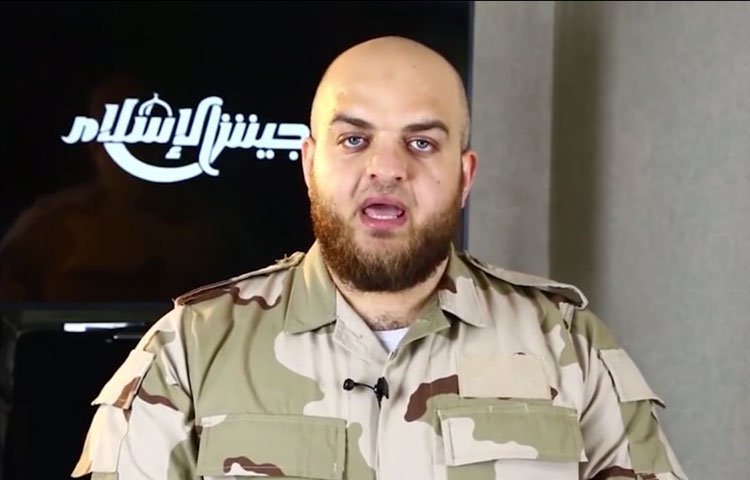 According to information provided by human rights organizations, Alloush or Ne’eme, a former army captain who defected from the Syrian army, and then became a senior officer in Jaysh Al-Islam and the faction’s official spokesman. Later on, he managed to establish close associations with the organization's leader Zahran Alloush until his death in a 2015 raid.

In August 2016, Alloush announced his resignation from his position in the faction and returned to using his real name, Majdi Mustafa Ne’eme.

Ne’eme announced his resignation from his post after an interview with the Israeli Elizabeth Tsurkov, who confirmed on her Facebook page that Alloush was aware of her nationality.

Alloush said in a statement: "In view of the requirements of public interest, I, Captain Islam Alloush, member of Jaysh Al-Islam, to resign from the position of the faction’s official spokesperson."

He added: "I announce my resignation due to my previous position’s relations with media, unlike other missions in the army which only require informing the internal apparatus of the decision to withdraw.”

Ne’eme was lived in France a student visa granted to him within the framework of the European Erasmus scholarships program.

Human rights organizations say that Ne’eme was involved in the forced recruitment of children in the ranks of armed groups and that many of the victims incriminate him and directly accuse him of kidnapping and torture.

The faction is suspected of having kidnapped, detained and tortured human rights lawyers Razan Zaitouneh and Wael Hamada, who is one of the founders of the local coordination committees, in addition to two of their colleagues, political activist Samira Al-Khalil and human rights lawyer Nazem Hammadi, who both disappeared after their abduction from their joint office in Douma, in December 2013.

Jaysh Al-Islam’s fighters were deployed mainly in Eastern Ghouta, in addition to controlling some parts of Eastern Qalamoun, the central region (Hama and Homs) and the northern and coastal areas.

After Jaysh Al-Islam lost its main stronghold in Eastern Ghouta (Damascus) in April 2018, the faction fighters moved to the Euphrates Shield areas in the northern countryside of Aleppo, where Turkey worked to annex the Ankara-backed Syrian National Army factions.

It is noteworthy that the French judiciary charged Ne’eme with several crimes last year, including committing war crimes, torture, and bearing the responsibility for Jaysh Al-Islam’s adduction of the well-known human rights activist Razan Zaitouneh in 2013.

Osama Moatarmawi and Osama Abuzeid are two names used by the same person, who was previously working as a legal advisor for the Free Syrian Army (FSA).

By the end of 2016, Moatarmawi appeared for the first time in a press conference as a legal advisor to the FSA, during which he announced the opposition factions' adherence to a ceasefire after signing an agreement with the Russian side. However, no one knows how the opposition factions entrusted him to speak on their behalf or be the legal counsellor of the FSA, which was affiliated with several military leaders and parties in Syria. 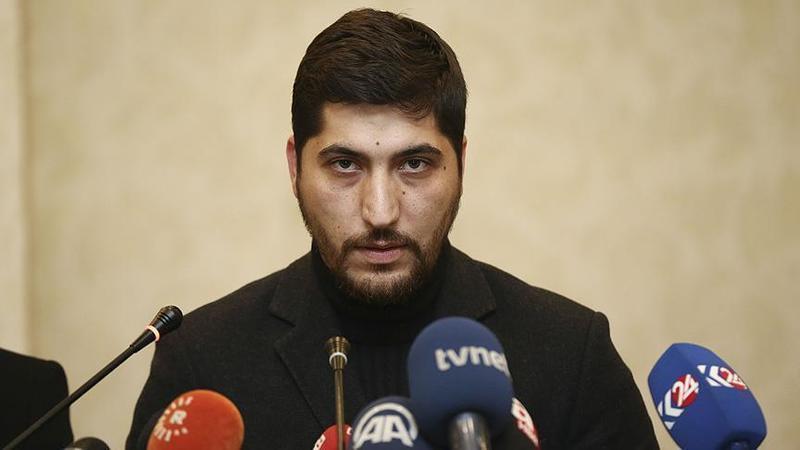 Moatarmawi did not study law, but he underwent training in international humanitarian law with a group of Syrian human rights organizations that have held these training workshops since 2012, which enabled him to become a legal trainer.

Afterwards, Moatarmawi moved to journalism, as he became a public relations manager and a host in Syria TV, before leaving the media establishment and remained out of the public scene until now.

Wael Alwan, or Abdel Rahman Labniyeh, was the official spokesman for Al-Rahman Legion in Eastern Ghouta (until the faction’s departure from the area in mid-2018).

Labniyeh chose to join the research field with the aim of remaining visible in the public Syrian scene, after quitting military work, especially since the faction no longer had an actual presence on the ground. He works currently as an assistant researcher at Jusoor for Studies in Turkey.

According to Jusoor for Studies’ website, Alwan studied political science and international relations while working in the media and political field within the ranks of the Syrian opposition, and held to position a teacher, as he held a BA in Arabic language and literature, in addition to participating in the opposition’s delegation in the 2017 Geneva negotiations. 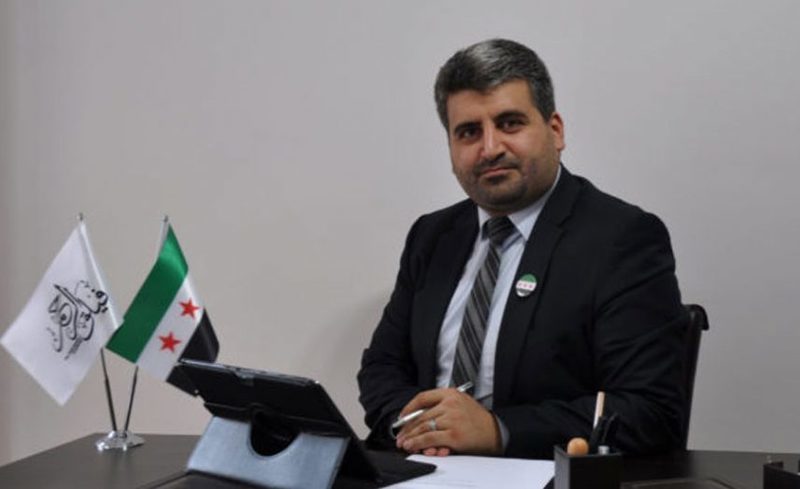 Alwan allegedly made an important statement regarding the party that kidnapped Zaitouneh in Ghouta on 9 December 2013, saying at the time that “her kidnapper is not a civilian, but rather a military formation, due to the fact that only a powerful entity can abduct a whole team. However, it is difficult to accuse a particular party because multiple military authorities are present in the region,” pointing out that “the office of Zaitouneh and her colleagues was located next to the headquarters of Jaysh al-Ummah faction.”

Alwan settled in Istanbul after the departure of the Ghouta factions to northern Syria in March 2018.