Testimonies of survivors and activists ... How did the 2004 events in Qamishli broke the barrier of fear? 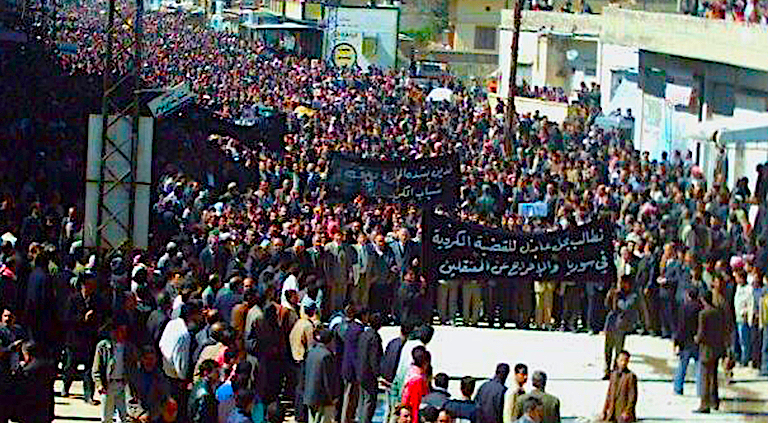 The Qamishli demonstrations against the Syrian regime in 2004 were not a passing event, as they were the first of their kind during the era of the President of the Syrian regime, Bashar Al-Assad; and now it is the 17th anniversary of the uprising, i.e. in March, the month that witnessed the eruption of the 2011 revolution against the same ruling class, holding the same slogans and demands of Syrian people.


The first spark of the revolution was set off after civilians were killed by armed elements affiliated with the Syrian regime during a riot that broke out during a football match between Al-Jihad SC and Al Foutoua, at the town stadium in Qamishli on 11 March, 2004.

Minutes after what happened in the stadium, the Mala’ebena Al-Khadra program (our green playgrounds) announced on the waves of Damascus Radio news about stopping the match as a result of a clash between supporters of the two teams, while stating that three children were crushed to death underfoot. The news had a great impact on escalating the tension in the city, and it turned out later that the program host reported false and fabricated news, according to the Violations Documentation Center in Northern Syria.

As soon as the news spread, thousands of people headed towards the stadium, in order to know what happened to their children, but the security forces prevented them from entering, as the sounds of screaming, squabbling and gun shots were heard from inside the stadium.

The tension continued to escalate until the governor of Hasakah, Salim Kaboul, (head of the security committee that includes the intelligence branches in the governorate) arrived at the place and ordered the firing of live ammunition at the crowd, and it was said that he “started firing from his own gun at unarmed civilians,” and here the massacre began, as fatalities and injuries started to occur, according to the Violations Documentation Center.

The popular rage burst the next day (12 March), after the security forces of the Syrian regime fired at the funeral of the stadium victims, which led to killing a number of civilians as well.

The demonstrations against the Syrian regime expanded in Qamishli and its neighbouring villages, as the protesters tore down pictures of Bashar Al-Assad and destroyed a statue of former President Hafez Al-Assad in the town of Amuda, near Qamishli.

An activist’s account of what happened in 2004 in the following video:

The demonstrations were not limited to Qamishli and the surrounding villages, as the protesters started to take the streets in areas inhabited by a Kurdish majority in Al-Hasakah, such as Al-Malikiyah, Al-Darbasiyah, and Ras Al-Ayn, as well as to Afrin and its countryside north of Aleppo. Hence, the security elements confronted them with violence and arrests.

The protests in support of Qamishli also reached Sheikh Maqsoud and Achrafieh neighbourhoods (Aleppo), which are inhabited by Kurds, in addition to neighbourhoods in the capital, Damascus, including Wadi Al-Mashari neighbourhood near Dummar, Rukn Al-Din neighbourhood, and the University City in Mezzeh. In effect, the Kurdish students who participated in the protest were dismissed from university.

Security forces set up checkpoints to arrest Kurdish citizens in Damascus, and besieged neighbourhoods where the Kurds live, such as Wadi Al-Mashari Wadi and Rukn Al-Din, and launched a campaign of raids and arrests there.

Civil society activist Sulafa Ahmed told Rozana that "what happened in Qamishli was not planned in advance, but was rather a reaction to the security attack on the football teams’ supporters and the killing of a number of them, in addition to fact that the Kurdish community was already in a state of anger due to marginalization and injustice practiced by of the Syrian regime against them over decades.”

"The Kurdish people felt in 2004 a great deal of injustice, due to the lack of sympathy with their movement, and in 2011 they looked at the situation also with a great sense of optimism about a potential opportunity for all Syrians to stand together against the system and achieve justice, freedom and dignity in Syria," according to Ahmed.

She added: "What happened in 2011 was an extension of the Qamishli uprising, which was quickly suppressed, and in 2011 the Arab Spring revolutions encouraged the Syrians from various regions and gave them a push to protest against the regime that used the same methods of repression."

The Syrian regime was quick to use a safe solution and resorted to violence to put an end to the Kurdish protests in 2004, in addition to arresting some Kurdish state employees, and several institutions decided to prevent Kurdish employees from working during the days that followed the events in Qamishli.

Political activist, Salma Suleiman, pointed out that there is no difference between what happened in 2004 and 2001, when the Syrians broke the barrier of fear after years of oppression, tyranny and silencing rebellion voices, to call for freedom and dignity.

In addition to the victims and arrestees during the events of Qamishli 2004, thousands fled to the Kurdistan region in northern Iraq, where some of those who remained there live in a camp called Qamishli.

As for the Syrian regime, it described, through its media, what happened in Qamishli as contrived actions of some people who want to steer chaos and break the state of stability and security enjoyed by the homeland and the citizens, adding that what happened is a criminal offense by criminals and rioters.

The Syrian regime also announced the formation of what it called an "investigation committee", with the aim of uncovering the circumstances of the vandalism acts in Qamishli and containing the criminal acts there, reported the Syrian Arab News Agency (SANA) at the time.

Syrian journalist Massoud Akko described to Rozana what happened in 2004, saying: “Civilians rose up and the crowds took the streets; men, women and children, in all Kurdish cities, towns and villages, and even the Kurdish neighbourhoods of Aleppo and Damascus, to denounce the killing of their children in cold blood.”

Akko added that "the Kurdish uprising and the Syrian revolution came in response to the killing of defenceless civilians, which prompted people to confront the killing machine by peaceful demonstrations, before the Syrian revolution turned into an armed one, while the Kurdish uprising remained peaceful until the regime succeeded to repress it, throwing thousands in prisons and following a security approach to attack the Kurdish cities."

The number of casualties of the Qamishli uprising reached about 40 dead and hundreds of wounded protesters, as there are no accurate statistics on the exact number of victims, in addition to 3000 detainees held by the security services of the Syrian regime. Thus, a number of the arrestees were killed under torture, while many of the remaining were released later under the amnesty decree issued by Al-Assad on 30 March, 2005, according to what lawyer Mahmoud Omar from Qamishli told Rozana.

Testimony of a detainee in connection with the 2004 events of Qamishli in the following video:

The census conducted in Al-Hasaka (north-eastern Syria), where a Kurdish majority lives, known as the 1962 census, constitutes a climax of injustice and marginalization practiced against the Kurdish community, according to their description, as it resulted in the division of the Kurds into three categories, the first of which enjoy the Syrian nationality.

After Bashar Al-Assad came to power in Syria in 2000, he promised to regularize the status of more than two million Kurds, but nothing happened until the start of the Syrian revolution in March 2011, as Al-Assad issued a decree in April of the same year stipulating the naturalization of the Kurds in north-eastern Syria, who were registered as foreigners. 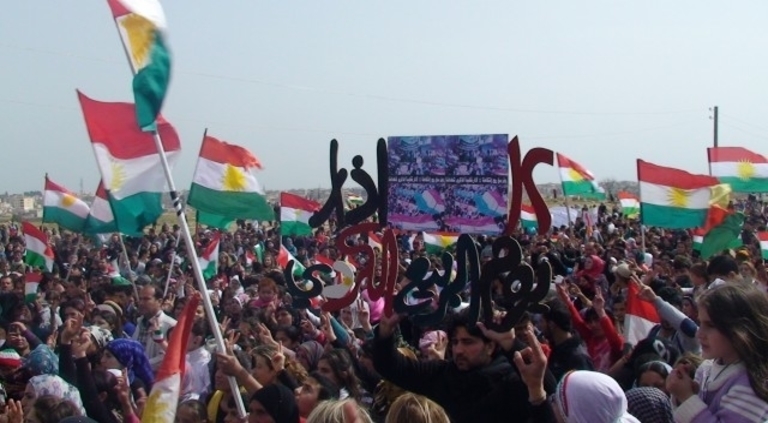 (From the activities of commemorating the Qamishli uprising, organized annually on 12 March)

It is noteworthy that the Kurdish regions participated in the popular protests against the Syrian regime that erupted in 2011, and in 2016 the Kurdish components announced the establishment of a federal system in the areas they control in northern and north-eastern Syria.