?Syrian Teachers Fated to Homelessness: Did UNICEF Fail to Support us 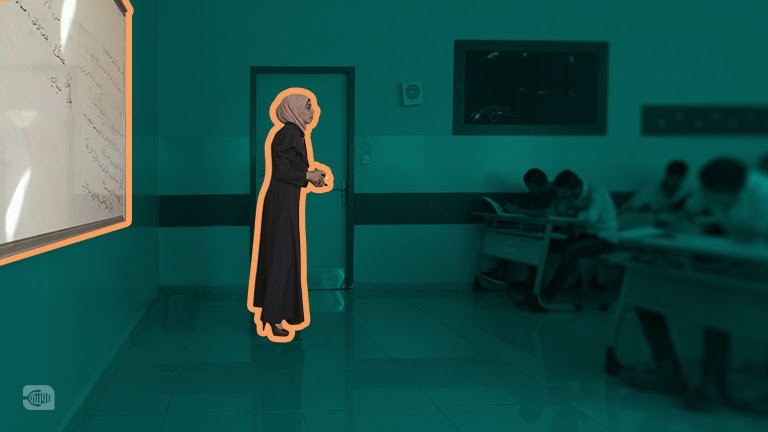 "I have been very anxious for the last ten days. Our livelihood is in the hands of Allah, but I have children and I am their only provider." This is what the teacher Salwa said after being informed of her dismissal.


The conditions for Syrians in Turkey have changed at a rapid pace since the emergence of the covid-19 pandemic. Salwa is one of those whose circumstances have shifted completely after she received the shocking news of being suspended from working a Turkish school.

Informed of the decision’s details

After divorce, Salwa, 33, became the provider of her three children, the youngest of whom is 9 months old, and the two others (6 and 9 years old) were born with disabilities.

She will be now bearing a great responsibility added to a heavy burden since she was informed of her dismissal decision: “I was shocked when the director called and informed me of my dismissal and that my salary was suspended. I did not believe it and went to the Turkish education directorate to inquire about the matter, but they confirmed the decision to dismiss her and other teachers.”

Turkish education directorate told Salwa and her colleagues, as she said, of the details of the decision. Every teacher who does not meet the requirements (a holder of a university degree and the second level of the Turkish language (A2), and to be under 65) will be automatically dismissed.

When Salwa submitted an objection along with her colleagues, the Turkish education directorate’s answered that they could keep their jobs until signing new contracts with teachers holding university degrees, without specifying date.

Last month, the Turkish education directorate informed dozens of Syrian teachers, who do not hold university degrees, of the dismissal decision by sending lists in which they mentioned the names of teachers whose contracts with the United Nations International Children's Emergency Fund (UNICEF) will be renewed next June, while many teachers were excluded as a final confirmation that they were fired.

Hana Mohamed, 38, a teacher residing in the Turkish city of Gaziantep, told Rozana that “the implementation of the decision started in a number of Turkish governorates and when it will be affected in our schools, our children will suffer. I have three children enrolled in Turkish schools (12, 13, 16 years old). Then my husband and I will have to take them out of school in order to be able to provide for the family."

She added: "My husband works in carpentry and his monthly salary, which is currently 2000 Turkish liras, is not sufficient for anything. We use my salary to pay the rent and bills and my husband's wage is dedicated to secure livelihood expenses. What do we do when my salary is deducted?"

Abu Muhammad, 57, a teacher in the city of Ankara, said to Rozana: “In Ankara, approval came to renew the contracts of 52 Syrian teachers, while my name and the name of 40 others will not be renewed due to the failure to fulfil the requirements.”

He commented on the decision saying: “My wife and I live alone and have no provider… I am 57 years old now, who will employ me and what will I do? There are many like me over who are above 50 years old,” while asking: “Is UNICEF unable to secure these sums?!”

As for Abu Sami, 52, a teacher in Ankara, he told Rozana: “My wife and I work in Turkish schools, and according to the decision, we will both be fired. We have four children, the eldest is 18 years old and the youngest is 4 years old. Is this humane?!”

Decision by the UNICEF

In 2016 and after the transfer of Syrian teachers from temporary education centres to official Turkish schools under the "lifelong learning" administration, the Turkish government did not require teachers to hold university degrees, but recently it did, which led to the dismissal of Salwa (who does not have a university degree) and many others from the Turkish schools.

Salwa said: "I cannot work as a porter, and I cannot work from morning to evening because I have to take care of my children. I do not have access to the Red Cross aid because I hold the Turkish nationality.” She wondered, sighing: “After this period, what will I do?"

The dismissed teacher added that the Turkish education directorate said that UNICEF is responsible for the decision due to its inability to finance teachers' salaries, which forced the authorities to reduce their number.

The decision to dismiss teachers is not the first of its kind, as a similar decision was leaked after the Turkish education directorate met with UNICEF and the Syrian teachers on 25 August, 2020. Thus, the decision stipulated “the termination of contracts with every volunteer teacher aged above 65, and everyone who does not have a university degree.”

Apparently, the dismissal decision did not target only the two aforementioned categories. In October 2020, the Turkish education directorate suddenly dismissed dozens of Syrian teachers as well, according to Abu Ayyub, 50, who was affected by the decision despite the fact that he was a holder of a university degree and the A2 level Turkish language certificate.

Abu Ayyub said to Rozana: "I have not found a job until now, as no one wants to hire a man in his fifties to work. I do not know what to do, the issue affected my family life, and my wife and I had major disputes because of my inability to find a new job to support the family. I travelled to Istanbul again to search for employment, hoping to find a job.”

The teachers concerned with the decision in the state of Adana held a meeting in the city of Kocaeli with officials of the Turkish Ministry of Education, on Tuesday, according to what teacher Ahmed Jamil Nabhan reported to Rozana.

According to Nabhan, one of the Turkish officials said that the decision to dismiss teachers was taken by UNICEF because the amount allocated to the salaries of Syrian teachers is only covers about 4000 teachers, and the Turkish Ministry of Labour prohibits any teacher from practicing the profession without insurance, which means that volunteering teachers will be dismissed by the end of next July.

He continued: "On the 25th of the first month, we received an order from the Turkish education directorate that every Syrian teacher should submit his/her academic degrees. After a short period, we were surprised by a decision stating that only the contracts of teachers with university degrees will be renewed," noting that “for instance, Adana has 900 teachers, but only 393 of whom had their contracts renewed until the end of the current academic year.”

How did UNICEF respond?

The UN body commented on the issue of dismissing thousands of Syrian teachers in Turkey, as UNICEF Communications Department official in Turkey, Sima Hosta, said in an email to Al-Hurra website on Wednesday that the dismissal decision came due to changes in the support program of Syrian volunteer teachers.

"With the completion of closuring all temporary education centres at the start of the 2020-2021 academic year, the Voluntary Education Support Program entered into a transitional phase, in order to adapt to the new requirements," Hosta explained.

The UN official added that since the beginning of February, the number of volunteer teachers was gradually reduced based on two criteria determined by the Turkish Ministry of Education, “the first criterion is that the Syrian teacher must hold a university degree, and the second is related to the teacher attaining the (A2) level in the Turkish language.”

She indicated that the teachers who will be removed from the voluntary education support program in February and beyond will be provided with a transitional support package, including professional counselling and training.

The Turkish authorities did not issue any comment on the decision to dismiss the Syrian teachers.

Hosta explained that starting from mid-2016 the Turkish Ministry of Education initiated the process of gradually closing temporary education centres and moving towards integrating Syrian children into public schools, and after that the volunteer education support program was adapted to the Turkish government schools and other educational institutions in the country.

The Syrian teachers who used to work in the temporary education centres and then moved to Turkish schools still hold the status of  volunteers, which means that they are not formally employed and have no access to the  labour system as the Turkish teachers.

The first year salary of the volunteer Syrian teachers was 900 Turkish liras, and then it was gradually increased annually to 2020 Turkish liras, transferred via the Turkish PTT Corporation to the teachers' accounts.

Syrians in Turkey suffer from deteriorating living conditions in light of high prices, caused by the increase of the dollar exchange rate, and low wages. On the other hand, the situation has worsened due to the fact that hundreds of people lost their jobs following the outbreak of Covid-19 and prices rocketed in markets as a result of the lockdown imposed by the Turkish government.

On 4 January 2021, the Turkish Statistical Institute announced that the Consumer Price Index (CPI) in Turkey increased by 1.25 percent, and inflation rates rose to 14.60 percent on an annual basis, explaining that, given the average of the last 12 months, CPI has  increased by 12.28 percent, so did the domestic producers’ prices by 12.18 percent.

The CPI in the goods and services category witnessed the largest increase at an annual rate of 28.12 percent, then the transport sector by 21.12 percent, and the food and non-alcoholic beverages by 20.61 percent.

The Syrians living in Turkey have been burdened the most by high rental prices and then the bills, especially in the winter season, as the Turkish Statistical Institute determined the rate of rent increase last month with a maximum rate of 12.28 percent, noting that the owner of the property who charges 1,000 Turkish liras is now able to raise the fee to a maximum of 1,122 Turkish liras, and this increase in prices generally comes with weak salaries that sometimes do not exceed 1,500 Turkish liras for those who work illegally, while the legally integrated employees receive no more than 2020 Turkish liras.