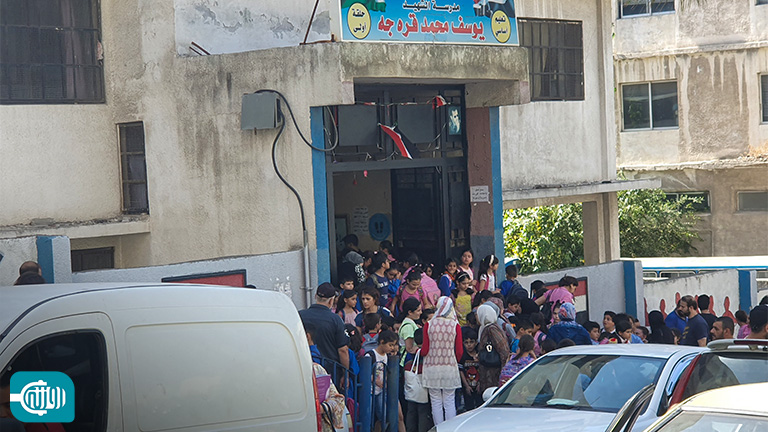 The outbreak of the coronavirus pandemic has revealed how false are the claims of those responsible for the educational process in Syria who said that they can generalize "distance learning " across the country as a precautionary measure to prevent the spread of the virus, as none of the government’s promises in the areas controlled by the regime have been fulfilled, and their talk about securing the requirements for distance education did not go beyond speeches.


The fiasco that Rozana referred to in the article entitled "Corona in Syria: Distance education is a fake procedure" was confirmed after the decisions taken by the successive governments and educational bodies to reopen schools and force students to attend classes with the onset of the winter season accompanied by a new wave of the pandemic, amid warnings that schools can be prominent incubators for the disease.

When the government of the Syrian regime reopened the schools, on 13 September, the number of declared infections with the coronavirus was 3,540, and on 8 November 2020 the infection rates amounted to 6,215, to record more than a 75 percent increase.

In the Autonomous Administration areas in north-eastern Syria, school attendance was resumed on 27 September with a number of infections that reached 1,398. However, on 8 November, 2020, the infection toll amounted to 5,645 cases, recording an increase of more than 300 percent.

With the first day of students' return to schools in northern Syria, on 26 September, the number of coronavirus infections was 825, but on 7 November, 2020, this number increased to 8,388, which means that the cases evolved by 916 percent.

Zones without internet connection... and individual experiences via WhatsApp!

Lama, who lives in Ish Al-Warwar slum in Damascus, thinks that "remote education" in slum areas is "impossible", because the cellular communications network barely reaches them, and it is more difficult to access the internet.

Lama was forced to send her son Ahmed (10 years old) to the public school, for there is no other alternative as she is not financially able to enrol her son in a private school that keeps even the minimum measures to prevent the propagation of the virus. 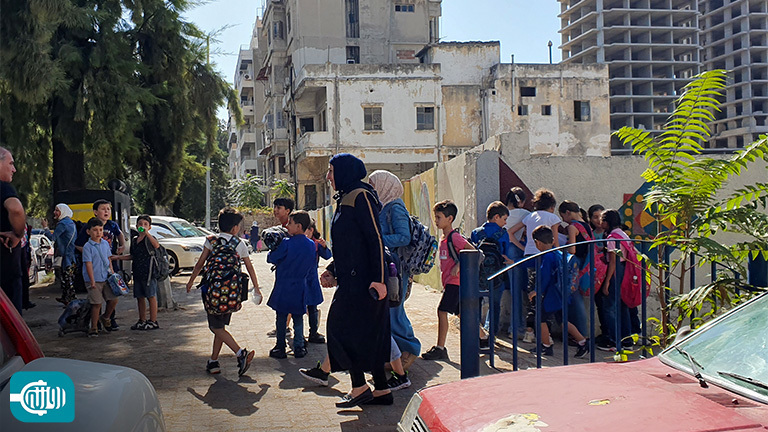 In front of a school in Damascus

Saeed, a student living in the Barza Al-Balad neighbourhood in Damascus, talked about the preventative measures to fight the coronavirus in his school, by saying to Rozana: "This year is no different from the previous one, except that when a student has the flu or a cold, he or she will miss class for a week."

As for "distance learning" in Jabla on the Syrian coast, Samar, who works as a school principal there said that this idea is still limited to some individual experiences.

Samar explained that some teachers took the initiative to use WhatsApp to teach their students, but schools have been reopened amid a new wave of the pandemic as if nothing had happened, as she put it.

She added: "All we could do to prevent the spread of the coronavirus was to distribute students into two shifts, so only 30 students are present in each class and two students in each seat."

Distance learning is ridiculed by students and teachers

Ola told Rozana: "In my school in Latakia, we do not even have board pencils. As for the idea of ​​distance education, it has become the subject of ridicule and jokes for teachers and students.”

Ola teaches English language to third grade of scientific and literary branches in a secondary school. In the classroom, there is only one blackboard pen that has no ink in it, and the school administration evades each time when asked to replace it.
Read also.. Corona in Syria: Distance education is a fake procedure 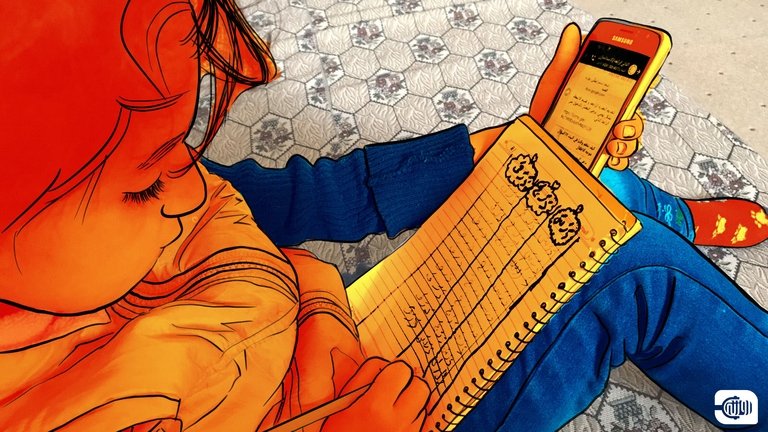 She describes the idea of ​​"remote learning" as "more like a dream or a big lie. Presenting the idea alone can be mocked by the teachers, most of whom do not have smart phones that support the programs required for this mode of teaching."

Ola asked with amazement: “Considering this reality, can we even think about distance education? ... The simplest traditional tools are not available, let alone the tools needed for distance education, including the internet, the electricity, computers or smartphones at the very least."

There was no other option for the official bodies in charge of the educational process in northern Syria, except to reopen schools and education centres in the camps, according to them, despite warnings of the spread of the pandemic in the region due to the contact among students.

Regarding the reasons for resuming classes, Mahmoud Al-Basha, head of the Elementary Education Department in Idlib, told Rozana: "We were forced to resume classes, even partially, because interrupting students’ learning in schools will lead to a decline in their educational level". 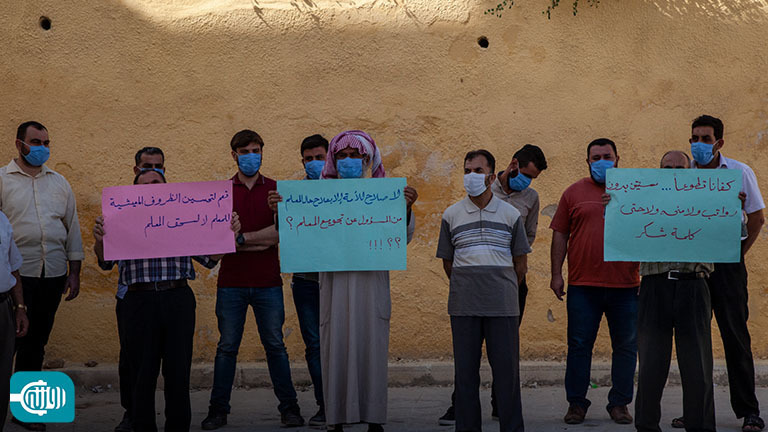 Most schools and education centres in northern Syria suffer a severe shortage of teaching equipment, especially in the camps, in addition to the fact that thousands of teachers are working there for low wages and have not received salaries for months.

A number of students and teachers in the city of Kafr Takharim in the western countryside of Idlib organized a protest last October to demand support for education and provide salaries for teachers.

Teachers protest in Kafr Takharim against delay in salaries’ disbursement

The shortage of books and educational and school supplies became worse as a result of the increase in the number of students after the recent waves of displacement, according to Al-Bakr.

Many displaced camps in northern Syria, near the Turkish border, suffer from the absence of schools or educational centres.

Tariq Al-Radwan, a resident of Deir Hassan camps, north of Idlib, said to Rozana: "I have four children who are supposed to start going to school this year."

"I was surprised when I went to enrol my children in one of the schools near the camp, that they would not accept more students after reaching maximum capacity,” added Al-Radwan. 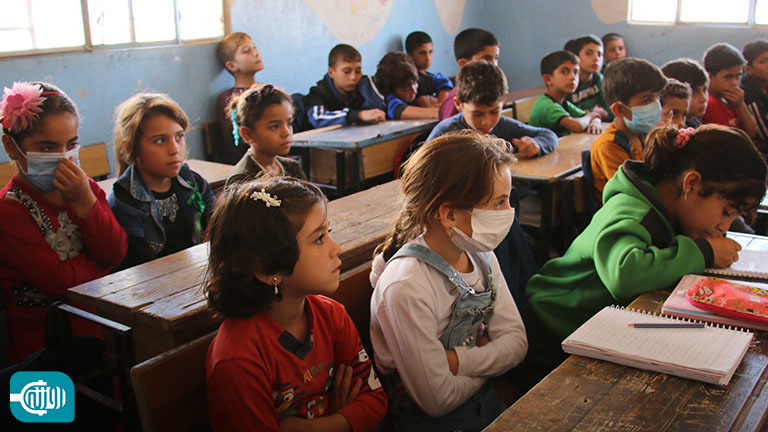 A classroom in an Idlib school

There is no alternative option for Al-Radwan, except to send his children to the Quran teaching classes in the area’s mosques, or leave them without education, he said.

Last May, Rozana conducted a journalistic investigation entitled Coronavirus in Syria ... Distance education is a lie, which examined the claims of governments in the regime controlled areas about the possibility of securing remote education tools, as a precautionary measure against the spread of the virus.

The investigation indicated that the possibility to carry on with the educational process to its minimum limits is almost impossible, but the authorities refuse to admit this, and rather tried to market an unrealistic "propaganda" about the continuation of the educational processes and developing remote learning applications.

The journalists conducting the investigation reached the aforementioned findings by considering the educational tools provided by the authorities controlling the Syrian territories, and assessing the extent to which students benefit from these tools on the ground by asking dozens of them about their opinions.