Lebanon: Syrian Woman Pays 55 Million Pounds in Costs of her Death from Coronavirus 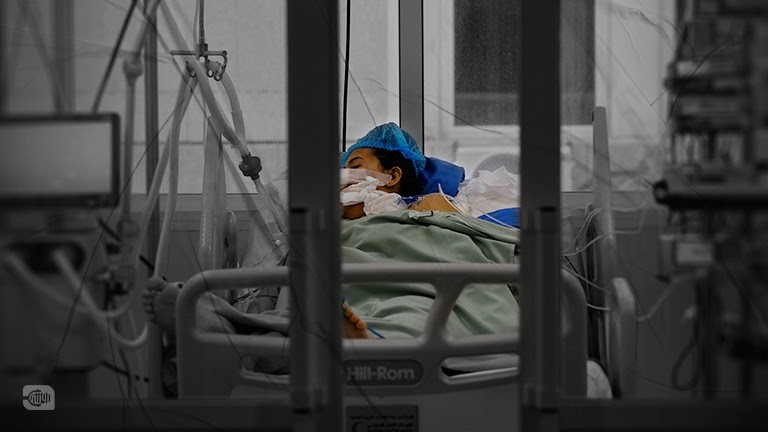 The coronavirus took the life of Shadi's mother after a suffering that lasted about a month and a half and ended with her death while still attached to the oxygen ventilator.  The deceased mother left five children behind and a debt of about 40 million Lebanese pounds, amid appeals to international and humanitarian organizations to prioritize helping the Syrian refugees in a country burdened with a suffocating economic crisis.


Warda Qaraquz, also known as Umm Shadi, is a 53 years old Syrian refugee in Lebanon who suffered throbbing pain from the coronavirus for about a month and a half since last December. At that point, the symptoms developed quickly, and led to the woman’s death in a Lebanese hospital in Bekaa, leaving her family in a state of shock.

Hind Qaraquz, Umm Shadi’s sister, whose sibling died on 15 December, told Rozana: “It all started when Umm Shady caught the flu, she did not suffer from any chronic diseases. She felt an extreme fatigue for six days accompanied with fever and a loss of appetite. On 8 December, we sensed something wrong, on the same day, an ambulance took her and she tested positive for Covid-19.”

Umm Shadi is originally from the city of Qusayr, south of Homs. She is a widow with five children, three girls and two young men. One of them is an expatriate, the other, 24, lives with her in the Qaraoun area in the Lebanese Bekaa, according to her sister Hind.

"We did not know how she got infected with the virus. As a mother, she was responsible for the house, and she had to go to the markets, shops, and so on," said the sister.

The virus took a grip on Umm Shadi's body during the 37 days she spent in one of the rooms of the Machghara Governmental Hospital in the Bekaa, during which she needed a ventilator. However, she could not beat the disease and died on the 15th of this month, according to her sister Hind.

The healthcare sector in Lebanon is experiencing a major crisis due to the deteriorated economic conditions in the country, as the Lebanese pharmacies have run out of the majority of medicines, in conjunction with the shortage of medical supplies in hospitals, including ventilators due to the fact that pharmaceutical and medical equipment companies insist to be paid by pharmacies and hospitals in US dollars, amid a severe foreign currency crisis in Lebanon.

Suffering continues even after death

Hind Qaraquz told Rozana that after Umm Shadi’s death, the hospital called her son and told him that a sum of 45 million Lebanese pounds has to be paid in order to hand him his mother’s body. At that point, the son received another blow after the shock of his mother’s sudden death, wondering how he would pay the cost for her treatment using the 800,000 Lebanese pounds wage he earns from working in a restaurant.

Even if we work for a lifetime we could not save such an amount. Our situation in Lebanon is bad. We can barely afford to eat." With these words Hind Qaraquz explained to Rozana the family’s suffering in Lebanon, adding that the treatment expenses also include injections that cost 7 million Lebanese pounds and blood plasma units for 3 million pounds, which Umm Shadi needed during her stay in the hospital, meaning that the amount is estimated at 55 million Lebanese pounds ($14,000).

The family borrowed 8 million Lebanese pounds, to recover Umm Shadi’s body from the hospital and bury it, while pledging to pay the rest of the amount in no more than six months.

Appeals to help the family pay cost of treatment

Umm Shadi's family contacted the United Nations High Commissioner for Refugees (UNHCR) and humanitarian organizations to help cover the cost of treatment, but their efforts were futile, according to Hind Qaraquz, who said: “We hope that someone will pay the money on our behalf.”
On 15 December, the day Umm Shadi died, social media users circulated news about the hospital’s decision to hold on to the body until the required amount is paid.

Umm Shadi’s sister stated that contrary to what has been circulated on social media, the hospital did not seize the body, explaining that the deceased woman’s son vouched to pay the remaining amount to the hospital, provided that the administration gives him time to collect the money.

The deteriorating economic situation has affected everyone in Lebanon, but it was harsher on the Syrian refugees. The United Nations announced on 18 December, 2020 that nine out of ten Syrian refugee families in Lebanon live in extreme poverty due to the economic collapse in the country.

A joint study published last month by the UNHCR, the World Food Program (WFP), and the United Nations Children's Fund (UNICEF) revealed that 89 percent of Syrian families are living below the poverty line until 2020, compared to 55 percent in 2019. Thus, half of the displaced families suffer from food insecurity.

The number of Syrian refugees registered with UNHCR in Lebanon reached 879,529 at the end of November 2020, while the Lebanese authorities say there are more than 1.5 million displaced Syrians in the country, 1369 of them contracted Covid-19 and 31 died, according to the World Health Organization (WHO).

Rozana team contacted the administration of Machghara Hospital to inquire about the hospital’s position, after facing a widespread condemnation campaign on social media in light of news about the hospital’s decision to seize Warda Qaraquz’s body after she died from the coronavirus.

The hospital administration categorically denied seizing the body, saying that it had contacted the UNHCR branch in Lebanon to follow up on the situation of the deceased Syrian refugee, but the UN body replied that it contracted with two other hospitals exclusively to treat refugees infected with Covid-19.

The hospital administration also denied pressuring the family to pay in exchange for recovering the body, while confirming the cadaver was handed over following the usual protocol.

The UNHCR spokesperson, Lisa Abou Khaled, told Rozana that she had contacted officials in the UNHCR office in Bekaa to follow up on the case of Warda Qaraquz, without giving further details.

Lebanon ranked second worldwide in terms of the number of coronavirus infections compared to the total number of the country's population, according to a statement issued by the Lebanese Health Minister Hamad Hassan.

The Lebanese authorities imposed a strict 10 days lockdown in the country to limit the spread of the coronavirus, which started on the 14 January and ends on the 25 of the same month, that is, after two days from today, despite the economic crisis that Lebanon is experiencing.

The massive number of Covid-19 infections has worsened the crisis, as public and private hospitals reached maximum capacity. Hence, the total number of infections amounted to 272,411 cases as of Friday after recording 3,220 new cases, while the number of fatalities was estimated at 2218, after recording 57 new deaths, according to the Lebanese Ministry of Health.

Umm Shadi was buried in the Lebanese Bekaa, while her son is still collecting the 40 million Lebanese pounds debt, which he has to pay within a maximum of six months.

Lebanon has been witnessing an economic crisis for nearly a year, which began to aggravate with the start of popular protests on 17 October 2019 against a government decision to impose new taxes on fuel and free social media applications.

The economic crisis led to a severe shortage of the majority of food commodities from the market, and an unprecedented rise in prices, as the Ministry of Economy and Trade raised the price of a bundle of bread from 1,500 to 2,250 Lebanese pounds. Thus, popular protests continue on a daily basis, demanding the authorities to find a solution to the current crisis.