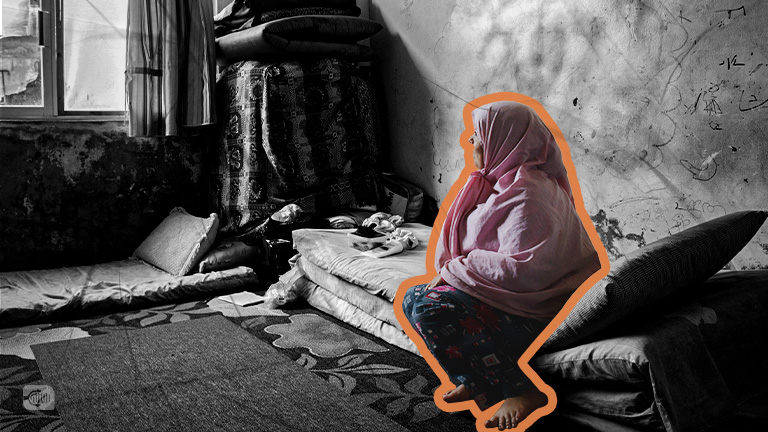 Syrian refugee Umm Fadi, 41, faces a general lockdown in Lebanon for ten days through buying bread only, at a time when people from all over the country are rushing to buy food and household items from the stores.

Umm Fadi, who lives in one of Tripoli's opaque basements, is divorced and the sole breadwinner for three children, the oldest of whom is 14. She works in preparing food supplies, and chopping and cleaning vegetables so that they are ready to be cooked, and then sells it.

She told Rozana: "I only bought two bundles of bread, and I have bulgur, rice and pasta. I hope I will not run out of supplies during the lockdown."

She added: "What is important for me, that I have 310,000 Lebanese pounds to pay rent, food is not important; even if we only live on bread and onions we have no problem with that."

Many Syrians have been affected by the coronavirus pandemic since its outbreak in Lebanon in February last year. Umm Fadi said that "for five months I had a daily income. I used to work as a cook in a restaurant, now my income has decreased. Sometimes I work two days a week, and sometimes a whole week goes by without work ... everything has become expensive and people cook at home. coronavirus is allied to the dollar, the worse the health situation is, the more expensive life becomes.

Activists on social media platforms have posted images of Lebanese people frequently buying food, before the start of the lockdown next Thursday.

On Monday, following an extraordinary meeting chaired by Michel Aoun at the Presidential Palace, the Lebanese Supreme Defense Council announced a health emergency for the first time to deal with the outbreak of the coronavirus. The lockdown will start at five o'clock in the morning of next Thursday, 14 January, for a period of 10 days and will end on the morning of 25 January, with exceptions for health workers, vital facilities and installations employees, soldiers and journalists.

According to Agence France-Presse, infection cases have increased in the country during the last week by 70 percent compared to the previous week, making Lebanon one of the countries that experience the most significant peaks of contracting the virus worldwide.

Lebanon is experiencing an escalation in the curve of infections, recording on Monday evening 222,391 cases, including 1629 deaths.

“Cut your coat according to your cloth.” This is Umm Fadi’s life motto these days, as she told Rozana, but the condition of Abu Jawad, 30, who lives with his wife and two children in Tyre, in southern Lebanon, is not in the best right now.

Abu Jawad lost his job in construction three months ago, due to a broken hand that forced him to stay at home.

He said to Rozana: “My brother also works in construction for no more than 50,000 a day, which is the equivalent of $5, and he divides the amount in half between his family and mine. If he does not work for a day, then we do not eat. So what will we do in the coming days of quarantine?”

He added: "During the days of the quarantine, many people will have to borrow in order to secure a livelihood, including my family and my brother's family, which means that we will have to pay the money back out of a month of daily wages."

The exchange rate of the dollar recorded Tuesday in the black market an increase to about 8900 pounds per dollar, which is the highest price recorded for a long time, according to the Lebanese newspaper An-Nahar.

The deteriorating economic situation cast a shadow on everyone in Lebanon, but it was more difficult and bitter for the Syrian refugees. Thus, the United Nations announced on 18 December 2020 that nine out of ten Syrian refugee families in Lebanon live in extreme poverty due to the economic collapse in the country.

A joint study by the United Nations High Commissioner for Refugees (UNHCR), the World Food Program (WFP) and the United Nations Children's Fund (UNICEF) last month revealed that "the economic downturn, severe inflation, the outbreak of the ovid-19 pandemic, and finally the Beirut port explosion, pushed vulnerable communities in Lebanon, including Syrian refugees to the verge of misery.”

The study indicated that the percentage of Syrian families that are now living below the poverty line reached 89 percent in 2020 compared to 55 percent in 2019, and half of them suffer from food insecurity.

The number of Syrian refugees registered with the UNHCR in Lebanon until the end of November 2020 is 879,529, while the Lebanese authorities say that their number exceeds 1.5 million, 1,369 among them were infected with coronavirus, and 31 died, according to estimates by the World Health Organization (WHO).