From Damascus to Latakia ... َA Cheerless Holiday Without Lights or Decorations 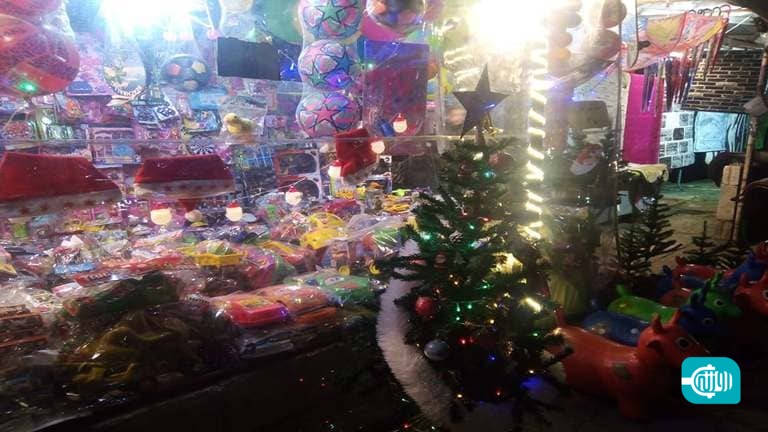 Reports | 30 Dec 2020 | Alya Kassab - Yasmine Ahmad
For ten years, Christmas visits Syria while the flames of war are still ablaze. The Syrians welcome a new year with more pain and a deepened sense of estrangement, that alienation that one feels at home. However, this year the people were destined to suffer more grievances with the spread of the coronavirus pandemic and the imposition of preventive measures, social restrictions, and so on.

In this investigative work Rozana attempts to depict Christmas and the New Year’s festivities while touring the streets of Damascus and Latakia.
Traffic congestion despite coronavirus.

In Damascus, the streets are crowded during the holidays period, as thousands of Syrians head to the Bab Touma area and the predominantly Christian Al-Qassaa neighbourhood, where social distancing measures are completely absent, markets and roads are jammed with pedestrians, and cafes are full of customers.

Walid, a coffee shop owner in Bab Touma, told Rozana that "the spread of the epidemic and the closure imposed at the beginning of the year made us lose all the profits this year, not to mention the stalled buying and selling movement in markets and rocketing prices beyond logic."
He added: "Coffee shop owners cannot impose social distancing measures because they cannot afford its high costs, in addition to the need to implement this measure collectively."

The pandemic is not the only issue that disturbs the Syrians ’holiday this year, considering that there is a more complex problem, which is electricity rationing. Christmas in our collective memory has always been associated with the lights hanging from the Christmas tree and bright-coloured decorations and light ropes garnishing buildings and windows.

Most of the Syrian regions are suffering due to the imposition of electricity rationing. Electricity can be cut off in some cities and governorates from six to eight continuous hours a day, and this year,  electricity rationing is also imposed during the holiday period as well, which means that the neighbourhoods that used to be the destination of visitors who want to admire Christmas decorations and lights will be lightless this year.

Lina, a young woman in her twenties, explained to Rozana that "Trying to decorate or place Christmas trees and hang coloured light ropes are like putting makeup on a dead person’s face," while asking: "What kind of holiday are we supposed to have without electricity or joy?"

Churches compete in Christmas and New Year to put on the best decorations, the Cave of the Virgin and the big Christmas tree, but all this effort goes in vain once the electricity is cut off, despite the fact that electricity generators are used in this case to keep the lights on and the trees’ decoration lit.

“As soon as the electricity goes off, the loud sounds of the church’s generator overwhelm all kinds of Christmas festivities,” said Fadi, a corn seller on a cart, complaining about the electricity generator used by the church next to his workplace, “If only it had a silencer.”

Yousef, a resident of Al-Qassaa neighbourhood, decided to buy a battery to keep the light on in his house and the Christmas tree. He said that Christmas is about light and colours, stressing that he will not accept any alternative solutions and that the city streets must be decorated with lights, as nothing can justify the scene of Damascus sinking in darkness during the holidays.

Decorations are not for the poor

Just like various commodities, the prices of Christmas trees and decorations have increased this year, so the joy of Christmas has become a luxury that the poor and their children do not have access to.

According to Salwa, who works in handicrafts, the price of one decorative ball sometimes reaches more than 1000 Syrian pounds, which means that its price has doubled twice or more compared to last year.

In an attempt to ease the excruciating living difficulties, a group of women in the Dwaila area adjacent to the famous Bab Al-Sharqi neighbourhood decided to make decorative items made of shiny materials that do not necessitate electricity power, and safe candle holders to avoid fires.

Zeina said: "We try to provide decorative materials at reasonable prices, using new methods,” adding that there is a great demand for the workshop’s products which are reasonably priced and beautiful without the need for electricity.

From Damascus to Latakia

Moving from Damascus to Latakia, the scenes of a cheerless Christmas reveal the tragedy that the Syrians are trying to transform into little joys they share during the holidays, and sometimes they fail to do so.

Hadi walks down Baghdad Street in the centre of Latakia, heading to American Street to look for Christmas lights on the balconies, but he does not see any.

He told Rozana: “When I reached the American Street, I saw a group of young men and women taking pictures near a huge building garnished with massive decorative lights,” adding with a laugh: “It is the building of the businessman Ayman Jaber, the only one lighted building this year.”

Christmas looks different this year in a city overshadowed by darkness, where its inhabitants are burdened by hopelessness and the struggle to provide a daily livelihood.

Last year, Hadi married Georgette, 35, who wants to place a Christmas tree in her new house. She said: "I work in a clothing shop and Hadi works as a nurse in a public hospital. Our total salary does not exceed 100,000 Syrian pounds. We need all our income to light a tree."

Christmas is not for everyone!

In the city of Latakia, people talk about the absence of Christmas joy this year. Abu Mahmoud, the owner of a shop, said to Rozana: "I heard that Ayman Jaber brought an engineer from Beirut, and paid 3500 dollars to decorate his office in the American Street. As for us poor people, we do not deserve to decorate our houses or offices. All we can do is take a photo in front of the spectacularly lighted building of Ayman Jaber."

Ayman Jaber is a Syrian businessman, whose name appeared during the war in Syria as the founder of the Desert Hawks group that fought alongside the forces of the Syrian regime.  The Latakia locals are talking about Jaber’s corruption, particularly depriving the Desert Hawks recruits of their financial dues.

The church’s Christmas tree without electricity!

Lama, Ola and Dima stand in front of Ayman Jaber's building in the centre of Latakia, taking pictures in front of the lighted Cave of Virgin and laughing happily.

"We looked for Christmas decorations in the city but the only decorated place was this one. It is really wonderful. Even the tree of the Roman Orthodox Church of the Archangels Michael and Gabriel is not lit because the electricity is cut off." Lama told Radio Rozana.

A night light in the form of a tree

Nadine, 34, decided due to the trees’ high prices to buy a night light in the shape of a small Christmas tree that runs on battery power.
She told Rozana: "I saw the item’s picture on Facebook. I contacted the page, and they sent it to me from Damascus. I chose the colour red and the children loved it despite its small size, its height is no more than 15 centimetres, but its price is also acceptable, as it costs about 3000 Syrian pounds.”

Papa Noel is also affected by the high prices. Nadine added: "The toys are expensive and organising a party with the presence of Papa Noel requires extra costs, so I do not think that we will buy toys this year. We can go out on Christmas Eve to see Papa Noel in the street and hear the sound of Christmas bells."

Jumana, 45, lives with her son, mother and father in the city of Latakia. They have kept a Christmas tree since 2010, and they decorate it together every year.

"Our tree is very big, and we have a lot of decorations. Praise the Lord, we have kept it for years, its price in shops now exceeds 500,000 Syrian pounds," she said.

Jumana added:" Most of my friends did not buy a tree this year, they use their old trees. However, the tree is eroding due to the humidity here in Latakia, and we have to replace or add decorations every year.”

My sister's family had a tree with a broken base, so they repaired it," she continued laughing: "We managed.”

Christmas traditions such as Papa noel plates used to serve sweets, Bush de Noel, turkey and other dishes will not be present on the table of Jumana’s family. she said: "Last year we bought a plate with a Papa Noel photo on it for 2500 Syrian pounds, today its price has reached 8500 Syrian pounds, also the prices of candies has doubled, so we decided to buy some sweets from the nearby bakery for the children.”