He Has The Right to Marry.. A Campaign to Support Syrian Young People or Mere Talk? 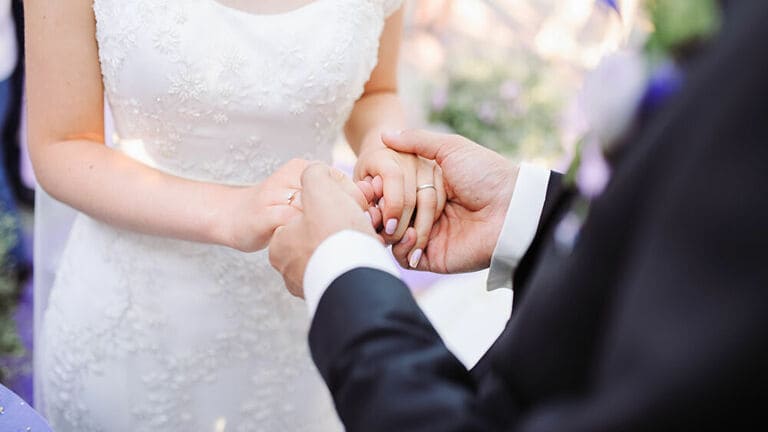 Young Syrians say that they do not want to get married, as if marriage has become a source of fear. They even avoid talking about it as the price of a gold ring exceeded half a million Syrian pounds.


Other wedding-related expenses are mainly paid by young men in light of the economic collapse, which has left 83 percent of Syria's population suffering from poverty, according to United Nations reports.

Amid the increase of prices and the reluctance of many young people to marry, a campaign was recently launched on social media platforms entitled "He has the right to marry" launched by young women in Homs, along with the slogan "I will live with you even if you do not have a house or golden jewellery.” The campaign spread quickly among Syrian social media groups and pages in various governorates.

Opinions about the campaign differed, as some supported it so that life could continue despite its bitterness, while others considered it a mere fuss that will lose momentum with time. Many people rejected the idea under the pretext of securing and protecting a better future for girls in the age of marriage. On the other hand, there were some sarcastic comments about the subject.

But the main question is whether this campaign can become a reality to be implemented on the ground or is it mere talk on social media, especially since golden jewellery and the wedding ceremony are essential rituals of marriage in Syria?

Ibrahim, 34, from Damascus countryside, told Rozana: "I followed the campaign on Facebook. There are many people who commented and supported it, but in reality this is just talk."

He continued: "Yes, I have the right to get married, but how? Even if the bride accepts the fact that I do not have my own house, I will definitely be obliged to rent one. How can I rent a house when my monthly salary barely reaches 60,000 Syrian pounds, while I need a minimum of 100,000 Syrian pounds to pay rent?"

Abdullah, 29, from Homs, agreed with Ibrahim while saying to “Rozana”: “marriage has become a dream for a young Syrian man like myself. No one thinks about getting married, neither me nor my friends, not to mention that when things get serious, the girl asks for things that no young man can afford nowadays."

Abdullah added: "He has the right to marry" campaign says that a girl accepts to live with a young man even if he does not own a house, but how can anyone even afford to buy a house these days!? Even rich people are no longer able to buy houses, and to rent a home has become very difficult."

Due to the collapse of the Syrian pound, the Syrian citizen needs more than four times his salary to be able to meet his monthly demand for food and water, which is estimated at an average of 40,000 Syrian pounds.

In a study conducted by Al-Furat Center for Studies last July, it was stated that a five-membered Syrian family needs 686,000 Syrian pounds to secure food each month, in order to live at the same level as 2009 and 2010.

Umm Basem, 43, who lives in rural Damascus, told Rozana: "last year, my daughter married a young man who lives with his family. We did not ask for anything except the wedding ring, and the dowry is only on paper. What was important to me is the fact that he is a good man and that he respects my daughter. Many families have become more lenient when it comes to the wedding expenses due to extremely high prices.”

She added: "Families that have not been affected by the economic crisis still ask for significant amounts as a dowry for their daughters, but they are few. The dowry’ value varies between 10 and 20 gold lira, as paid dowry and deferred dowry, and cloths worth 5 million Syrian pounds in addition to golden jewellery.”

Umm Muhammad from Hama tried to find a wife for her son, but she was unable secure the demands of the girls' families, such as the golden jewellery and other expenses.

She explained to Rozana: "Now the girl's parents are asking for the impossible, and they say that this is a guarantee for their daughter in light of the current conditions. They cannot marry off their daughter to a young man with modest financial resources.”

What about military service?

Wissem, 31, from Damascus, told Rozana: "The war and the economic crisis did not change the customs and traditions so far. Many families still ask for gold to marry off their daughters, even though its price has exceeded 130,000 Syrian pounds. Also, the girl's family rejects young men who serve in the army or those summoned for reserve service.”

He added: "In 2015, my friend decided to get engaged, but he was summoned for reserve military service at the time and he did not manage to marry since then. Although he has a job besides serving in the army, the Syrian families are afraid to marry off their daughters to a young man serving in the regime's army."

Umm Basem confirmed this idea saying: "People do not sympathize with others anymore. No one agrees to marry off his daughter to a young man who serves in the military or has to perform reserve army service.... Many young men, who have children, have been summoned for conscription, is it logical that their wives ask for a divorce, for example?

A collective wedding in Homs

The exorbitant wedding costs prompted a family in the town of Shin in the countryside of Homs to hold a collective wedding for four brothers. The news spread on social media on the 27th of this month, and the photos received thousands of likes and comments.

Many Syrians expressed their admiration and support for the idea, which expresses a wave of social awareness in order to limit the costs of weddings these days.

Many Syrians gave up on the idea of buying gold after its price rocketed and became a luxury. For some people gold is no longer as important as it used to be in the past, as their primary concern now is provide daily livelihood.

Head of the goldsmiths association in Damascus, Ghassan Jazmati, said on the 8th of this month that the price of golden wedding rings amounted to more than 600,000 Syrian pounds.
Jazmati explained that this increase resulted from high prices in the international gold market, as, the price of an ounce has reached $950, in addition to the deterioration of the Syrian pound which led to an increase in exchange rate, reported Tishreen newspaper.

Yesterday, Sunday, the gram of 21-karat gold, according to the goldsmiths association in Damascus reached 136,000 Syrian pounds sold, and the selling price of one gram of 18-karat gold amounted to 116,571 Syrian pounds.

Buying a house has become a dream!

In May 2018, Al-Ba’ath newspaper stated in a report that buying a house at this time has become a dream for those who are about to get married, in addition to the material requirements for marriage that are difficult to secure by the majority of young people, including those who are financially stable, which led to a high rate of spinsterhood in Syria.

Summoning for reserve and compulsory military service prompted hundreds of thousands of young Syrians to flee outside the country or to areas not controlled by the Syrian regime, while other young men resorted to hiding and staying at their homes for fear of arrest and conscription. Thus, others have committed to serving compulsory or reserve military service for up to nine years.

The Financial Times published a report in January 2019, in which it indicated a decrease in the number of men in Syria due to the war, which pushed women to get jobs in a way that differs from traditions in the Syrian society.

The newspaper pointed out that the military campaign launched by the regime forces and the forced conscription campaigns led to a demographic change in the country, following the death of 500,000 people in the war, 80 percent of them were men, according to the Syrian Center for Studies.