New Salaries for Teachers in Syria: an Increase or a Distraction 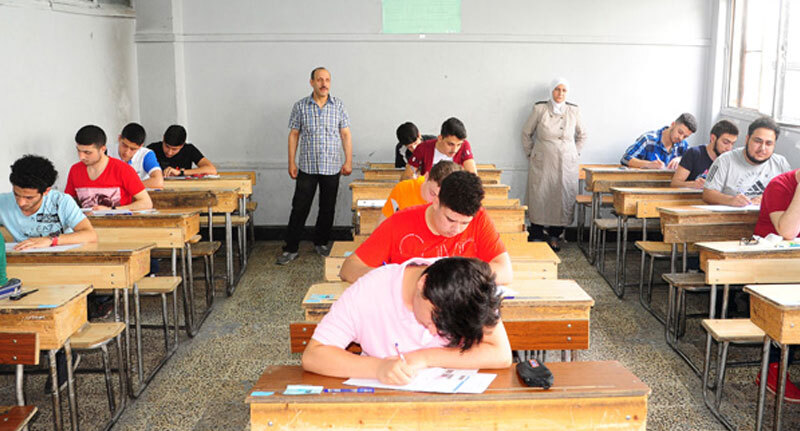 "Our situation is deplorable. Regardless of the amount of wage increase, it will not cover price inflation,” said Umm Lara, a Syrian teacher, commenting on the decision to increase salaries of teachers and school administrators made by the president of the Syrian regime, Bashar al-Assad, in light of the stifling living crisis which affected all the Syrians after the deterioration of Syrian pound.


On Wednesday, the Syrian presidency said that al-Assad issued Legislative Decree No. 27 of 2020 grants Syrian teachers monthly compensation of 40 percent of their monthly wage and to compensate administrative workers with ten percent of their original wages, applicable since 30 June 2013.

Al-Assad also issued Decree No. 28 of 2020 granting workers with educational positions in the governorates of Aleppo, Raqqa, Deir Ez-Zor and Hasaka compensation for working in remote places at 25 percent of the monthly salary as of the date of execution of the work, except the workers in the governorate centres. Employees who work outside schools or in educational complexes are not covered by this decision.

Umm Lara, a sociology professor, told Rozana: "Our situation is pitiful. Regardless of the wage increase, it does not cover the price hike. My salary is 53,000 Syrian pounds ($42), and I pay a monthly transport fees of 8,000 Syrian pounds, in addition to the expenses of my daughter's kindergarten and transport, amounting to 16,000 Syrian pounds, which could increase in the coming days."

She explained: “We live hand-to-mouth. I work overtime as a private tutor to increase my income, which ends in the first week of the month. The private lessons can provide me with 17,000 Syrian pounds, but it is not enough."

The teacher added: "My husband and I make 111,000 Syrian pounds per month ($88), and we pay 32,000 for transport costs, in addition to rent and sudden health emergencies. My daughter got sick two days ago and her medication cost 10,000.”

“What would be left of the salary although we are deprived of many things?" she wondered sighing.

Umm Lara said: "My friend lives in Aleppo and she currently teaches in the As-Safira region in the eastern countryside of the governorate. She pays at least 12,000 pounds for public transport costs. We do not know whether the additional allowance stipulated by the new decision will compensate for the cost of transport even partially.”

Lama pointed out that most teachers manage to make extra cash with additional work, such as private lessons, in addition to relying on the remittances of their expatriate relatives in foreign currency, which help them provide their livelihood needs.

A raise to preserve the dignity of teachers.

Head of the Syrian Teachers Syndicate, Waheed al-Zaal, said in February 2019 that the Ministries of Education and Finance were about to approve a 30 percent wage increase for teachers, reported Al-Watan newspaper.

According to al-Zaal, the decree came to counter the phenomenon of teachers’ work in unlicensed institutions and private tutoring. He added: "We do not accept that a teacher works as a taxi driver or vegetable seller. Rather, he must practice his profession as a teacher, but within an organized framework and licensed institutions."

The recent increase of the nature of work allowance will not provide the necessary financial resources for teachers to quit looking for additional sources of income in light of low salaries and high costs of living. A Syrian family now needs a minimum of 300,000 Syrian pounds per month to cover its basic expenses, according to what Judy Al-Sayed, a teacher living in Damascus and a mother of two daughters aged 3 and 5, said to Rozana.

Al-Sayed added that the nature of work allowance for teachers, which used to be 7 percent of their salaries, equivalent to 3000 Syrian pounds, rose to about 7500 Syrian pounds, regardless of the date of the educator’s appointment. While for office jobs, the raise will be about 2000 Syrian pounds, according to what was understood of the new decision.

What does nature of work allowance mean?

According to Article 98 of Law No. 50 of 2004, which defines the basic code of labour for state employees, the nature of work and specialty allowance is granted to workers for the special nature of their jobs, the difficulty of residing in their work area, the risks of the profession, and the distinct physical or mental stress caused by the post and specialized technical work.

According to the law, "the nature of work and specialty allowance granted to a single employee, should not exceed 40 percent of the wage as of the date of performing the work, regardless of the variety of its types."

The Syrians are suffering from a rapid deterioration of living conditions, due to the collapse of the Syrian pound which exceeded the value of 3000 against the US dollar in mid-June leading to a significant rise in market prices.

The government of the Syrian regime has also recently doubled the prices of foodstuffs, especially bread, in addition to raising the prices of fuel, which has greatly exacerbated the livelihood crisis.