“We have lost everything” ... Stories of Syrians living in disaster-stricken Beirut 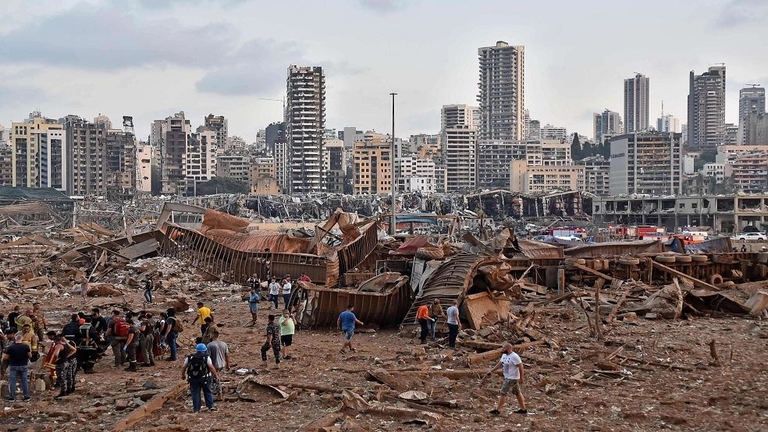 "I was in my house in the Rmeil district of Beirut, which is located in front of Al-Roum hospital, adjacent to the port of Beirut and the areas destroyed by the explosion. My wife and children were not at home with me. Luckily, they were staying with my wife's family. I was getting ready to leave to work."

"At seven past six, I heard the first explosion, I ran to the balcony, and then I went to the bedroom to get dressed and went to work. Suddenly, the second explosion occurred and everything fell down."

"The whole front of my house was made of glass. I fell down and the whole place shattered. At first, I was hit in the eye, and I felt like I had completely lost my sight. I started walking around my house aimlessly between the rubble and the broken glass."


This is how the young Syrian, Awad Issa Ahmed, narrates what he experienced on the day of the explosion in the port of Beirut on 4 August 2020. He has lived there since 2003, married to a Lebanese woman and works in an institution in Sin El Fil.

He added in his interview with Rozana: "I thought it was an Israeli attack, after that my thoughts were blocked, I went to the street where I met my nephew who took me to my family's house to make sure they were okay. My clothes were covered with blood, and I couldn't walk because of the wounded legs, when I saw my family, I fainted completely."

Issa says: "Now I have no house and no car, I lost everything, everything has become dust and debris, the whole street is ruined, but I am grateful to God that my family is fine."

Ghalia experienced the same horror that Issa described to Rozana, while telling what he experienced on that terrible day in Beirut. She is a Syrian student who lives in Beirut, in the Mar Mikhael area near the port, which also noticed enormous damage.

Ghalia said: "For the past two days, I've been trying to pack up my clothes and my house," she said in a trembling voice. I feel that I am still confused; I don't understand what's going on around me. The explosion has ruined us emotionally, not just financially. I don't know how to describe the scene. I was in my room talking with my family on the phone, I heard the first explosion, I ran outside. Maybe if I hadn't come out for a while, I would be among the dead now. My entire house was destroyed; the street where I live is ruined. I can't describe the horror I feel every time I remember it," she said.

Based on the available data, 43 Syrians were killed in the explosion which caused more than 150 deaths, about 5,000 injured, and dozens of people are missing. So far, there is no final information available, investigations are in progress and the case is still unresolved and ambiguous.

According to the reports available, most of the Syrian victims are workers in the port or in neighboring institutions. It is noted that most of Beirut's neighborhoods and even some suburbs have been damaged and no one has been spared from the devastation.

Syrians had rushed to Lebanese hospitals to donate blood to the victims. This was not the first time that Syrian and Lebanese blood had been blended; neither was the first time they shared a common tragedy. Perhaps during those unforgettable moments, many Syrians imagined that they were in Syria and that what was happening was an aerial bombardment of their homes.

Rozana has been informed that blood donation campaigns were launched in the Syrian refugee camps, particularly in the town of Arsal, where there are several camps. A number of camp staff and their medical equipment have also been involved in rescuing the injured inside the capital, Beirut.

Mohammed, 40, a Syrian refugee from Homs, who lives in a refugee camp in the Arsal area, stated: "We know the meaning of disaster; we know what it is like to lose a dear person. I will donate blood; I have nothing else except my blood to help the innocent people who are bearing the cost of corruption, negligence and disasters."

The roads of Beirut are filled with stories of Lebanese, Syrians and others who have lost their loved ones, their house, car, shop or future. The streets of Beirut are full of sorrowful and painful stories.

The 2,750 tons of ammonium nitrate, found in Beirut's port district No. 12, exploded in the city center, hitting people, their workplaces, residences, schools and universities. We can imagine the magnitude of the tragedy... These stories will remain a symbol of tragedy for many years and perhaps many generations. August 4, 2020 will be a date that will be remembered forever.