Syrians search for their sons under the rubble of Beirut port 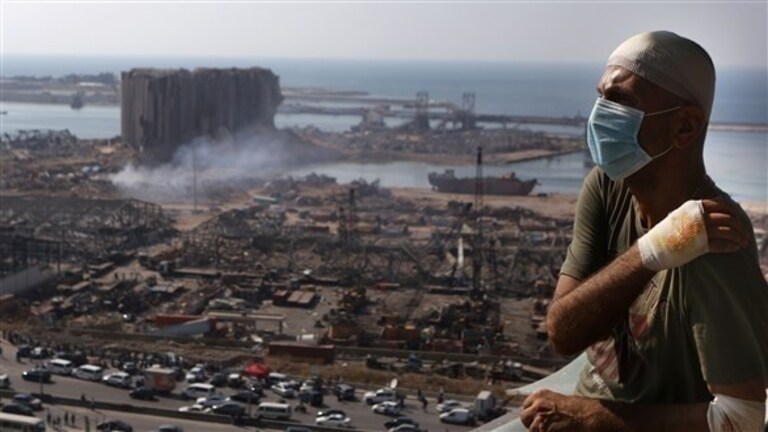 "We left our country and our village in Syria escaping from death, but we did not expect that death will follow us for too long," said a Syrian family, describing the situation after the explosion of Beirut port (Tuesday, 4 August 2020) that caused disastrous damage to the Lebanese capital and its residents.


The "Molham Volunteering Team" page that followed the case of a Syrian family whose members were seriously affected, pointed out that the Syrian refugee Huda was seriously injured in her head and needed to buy plaques for her neck, clarifying that although the operation would be at a free cost in one of Lebanon's hospitals, the cost of the plaques exceeds $3,000.

Molham Team's page states that Huda's family "was sitting near the door of their small room in Beirut, and when the explosion took place, their joyful moment turned into destruction. Her sister died immediately from shrapnel in the head, her father and mother were carried to an intensive care unit, while Huda’s neck was broken and needed an urgent surgery and a metal plate installation, and she is now agonizing."

The Team devoted a donation campaign through a special publication on Friday night to raise the required amount to save the life of the Syrian refugee, and the Team's publication confirmed that people's donations and sympathy would be the only hope for the refugee whose destiny would be the same as her sister. To donate to the campaign of their Volunteer Team, the special campaign, named For Beirut, can be accessed through the following link:

A young man missing and conflicting news about his fate

The family of Huda was not the last tragic case faced by Syrian refugees after the port explosion, as social media documented many sad stories that Syrian and Lebanese families witnessed as a result of the tragic event that still tops the news headlines of different media outlets.

The family of the Syrian youth Amer Ahmad Hussein appealed to anyone who knows any information about their missing son, as he was working in the port at the moment of the explosion. According to Bint Jbeil website, Amer was aboard Amadeo II at ward 9, and nothing is known about his fate so far.

At a time when the family of Amer in Syria was worried, there were rumors that the young man may have been found in a hospital, but suffering from memory loss. However, according to a family relative, these rumors are contradictory and nothing is certain.

In the same vein, the Syrian regime’s embassy in Lebanon declared on Saturday afternoon that it had documented the killing of 43 Syrians, as preliminary statistics, as a result of the Beirut port explosion.

The embassy said on its Facebook page that “in continuation of the efforts made by the embassy in Beirut to follow up on the conditions of the Syrian citizens affected by the terrible explosion that struck Beirut port last Tuesday, the number of Syrian martyrs has reached 43 so far.

Martyrs died as a result of the explosion, in preliminary statistics. The embassy has provided all facilities to transport the bodies of some of them to Syria, and to help bury others in Lebanon.”

The blast, which took place Tuesday, the biggest in Beirut history, killed 154 people, destroyed a wide section of the city and caused landslides all over the region.

Officials say that the explosion may cause economic losses estimated by $15 billion.

The explosion destroyed the only grain silo in Lebanon, which has a population of about 6 million, and it also destroyed residential and commercial properties.