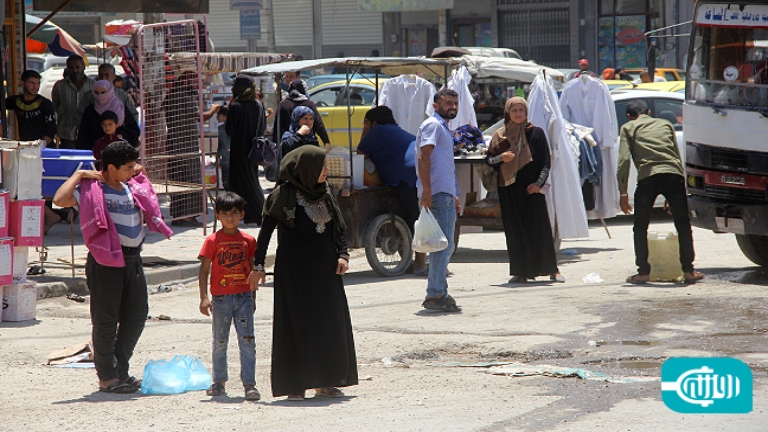 "We do not feel safe during the daily commute in transportation. We advise people to apply infection control measures, but we don't apply them. We've been through the worse, to the extent that we don't care anymore about the Coronavirus."

The Coronavirus (Covid-19) is putting women at risk in all parts of Syria, in transport, markets and even in hospitals. The necessary preventive measures have been absent because of the economic crisis.

The exchange rate of the Dollar reached approximately 2,800 Pounds. Last February, the price of a box of home-made masks was 9,000 Syrian Pounds and the price of imported masks reached 13,000 Syrian Pounds.  Trade union sources attributed the reason behind this increase to the Al-Iqtisadi website, as some masks were smuggled into Lebanon after the first cases emerged.

"No one cares about wearing masks, because there are many priorities before buying them. Everyone uses public transport without taking the precautionary measures recommended by the World Health Organization," said Amira from the town of Sweida to Rozana.

The results of the Ministry of Health affiliated to the system government - publicly known at least - underline the risk of social contact and non-compliance with preventive precautions among the local community and the relevant institutions, especially the medical service, as the number of cases resulting from contact with infected persons has reached 139 out of 242 up to now, over half, which is a dangerous sign.

The rate of infection among women increases, even if they stay inside the house. Men spend more time outside without taking preventive measures, and then they return infected or carrying the virus, which will infect others.

A follow-up to published photos of Syrian city residents displaying their disposition shows that men go to coffee houses and official services without following precautionary measures.

A sixty-year-old man suffering from heart failure and diabetic complications died at the Aleppo University Hospital (Friday, June 26). The number of deaths due to the virus has risen to 9 cases. Health officials and surveillance teams in Aleppo started to limit the number of people who had been in contact with the infected
person and took samples for further analysis, besides taking the necessary health precautions. 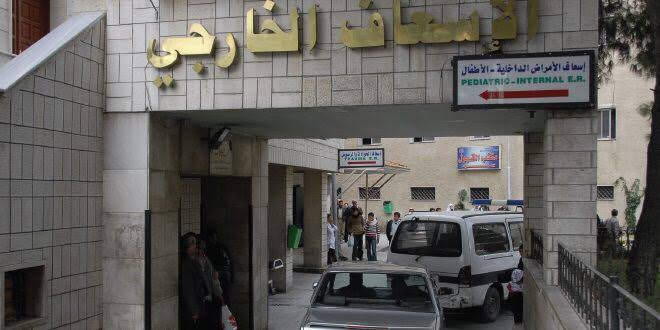 A picture of Mouwasat Hospital - an external ambulance gate

A similar incident occurred in Damascus, too, where a nurse in Mouwasat Hospital announced that she was infected with the Coronavirus. "I work in the emergency department, and I believe that my infection is due to a contact with a seventy-year-old woman who was brought by ambulance to the hospital. This patient is from Jadidah and she came two weeks ago," she said.

However, the nurse who is living in the University of Damascus nurses' residence has transmitted the infection to three other nurses, according to statements released by Damascus University Vice President Subhi Al-Bahri to the local newspaper Al-Watan.

The head of the nursing sector, Yusra Malil, told the newspaper Al Thawra Online at the end of last year, that about 35,000 nurses work in the medical institutions of the Syrian regime, in the hospitals of the Ministry of Health, 10,000 in higher education hospitals, 4,000 in the Ministry of Defense and 6,000 in the Education and Interior Ministries.

The tables of results of the Ministry of Health of the regime government show that the percentage of infected women between the ages of 30 and 60 has reached 19 cases per decade.

The study published by the World Health Organization entitled, "The impact of pandemics and infectious diseases by gender/sex," indicates that the life cycle of infectious diseases is classified according to the period (childhood - adulthood - pregnancy - the elderly).

The transmission of these pandemics is also influenced by gender roles regarding where men and women spend their time, the infectious factors they face, in addition to the nature, frequency and intensity of exposure.

In Raqqa, Abdullah al-Khalaf told Rozana: "There are currently no established procedures set up by the city authorities. Employees no longer measure the temperature of auditors and employees in front of official services.".

One of the nurses at the National Hospital in Raqqa (the city under the control of the Syrian Democratic Forces) confirms that the local authorities have provided equipment to the laboratories to carry out tests and detect people who are infected with the virus.

But the authority made no effort to protect medical staff and set up a box to receive complaints from medical staff. 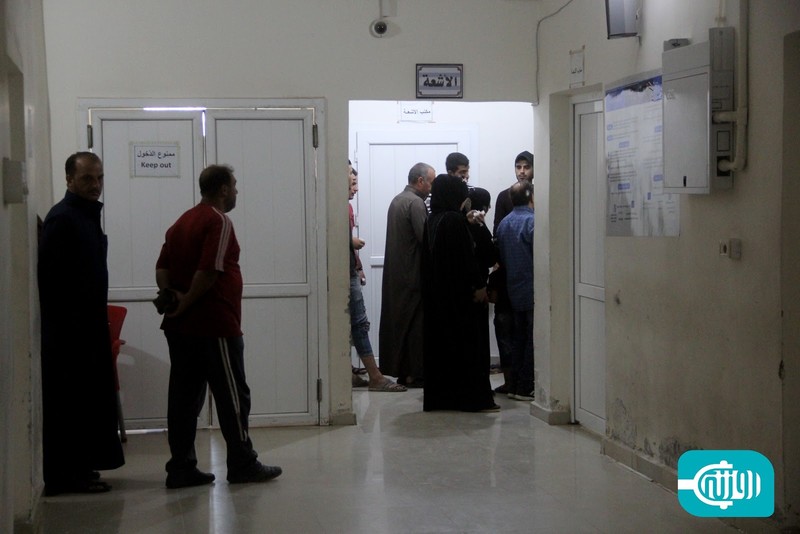 From inside the National Hospital in Raqqa

In the town of Idlib (under the control of Hay'at Tahrir Al-Sham (HTS)), only employees of the official services and offices of civil society organizations are instructed to wear masks. Hanin told Rozana that although civil society and voluntary organizations have distributed masks before and despite their low cost, there is still negligence in following procedures, except those who are aware of its importance.

In Damascus, Samira, a governmental employee, said to Rozana that "the departments have not taken any steps to enforce the necessary distance between employees in the offices of the institution. There is an employee measuring the temperature at the entrance, sterilization is going on, and the gloves have been distributed. But, the wearing of the mask is a personal decision and it is paid by the person. As for the condition of the public transport, it's lamentable."

Rima, a young woman who works in the psychosocial support department of a civil society organization, told Rozana: "The last medical mask I bought, which was very poorly made, cost 500 Syrian Pounds, before going down to 300."

At the moment, it is impossible to take the necessary precautions, as Rima asserted, due to the high costs of medical supplies dedicated to this purpose.

In the first week, after easing the lockdown, the association where Rima works gave each volunteer a medical mask and a touch sanitizer on a daily basis, provided that each aid worker will figure out what to do on his/her own in the coming days.

"We go to clinics and dispensaries to educate people about the virus, and we advise them to adhere to the directions of the World Health Organization, so they can protect themselves from infection. We take upon ourselves to raise awareness about the disease, while we fail to take the simplest precaution against it," she concluded, laughing. 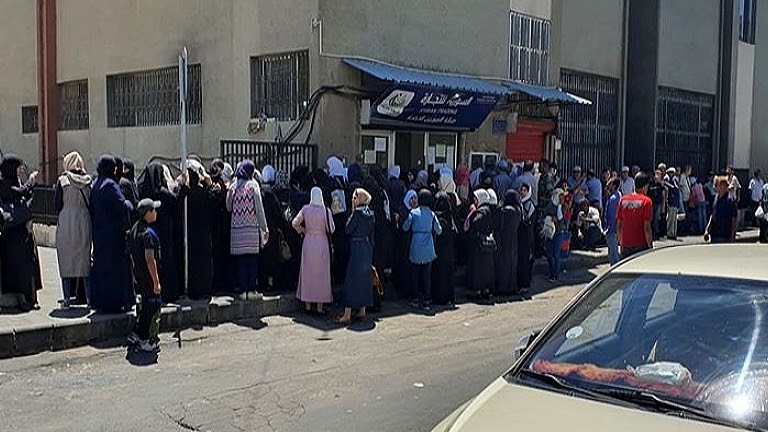 The regime’s Ministry of Education has suspended the student attendance system. However, the authorities banned the use of medical masks and gloves in exam centers among female and male students who are supposed to be evaluated to receive middle and high school certificates.

Instead, the Ministry only measured the students’ temperature at the entrances of exam centers and transferred suspicious cases to the hospital; and despite maintaining social distancing, there is no procedure to prevent more than half a million students from mixing before entering the examination halls.

The press coverage of the government media showed that the Ministry of Education had not taken protective measures regarding female teachers who followed up on the correction process. 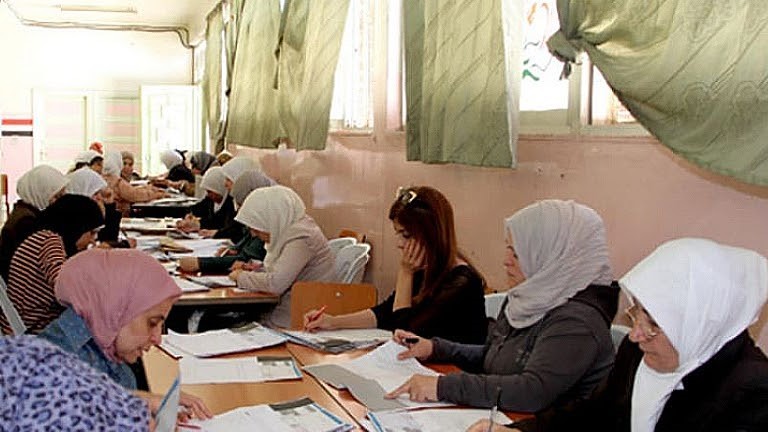 The first female doctor infected with the Coronavirus in Syria, who caught the disease from one of her relatives in Ras al-Maarah in Damascus countryside, was suspended from the gynecology department of al-Qutaifa Hospital.

Many questions have been asked about the feasibility of medical examinations, especially after the story of the truck driver’s infection in Ras al-Maarah.

The driver underwent a medical examination in the Syrian border, according to what was stated to a local radio station, and recorded a normal temperature of 34 degrees, but, surprisingly, the medical staff at the Jordanian border confirmed that the driver’s test was positive, which led to deporting him.

The driver did not know that he contracted the virus and kept living normally until he passed the disease to the aforementioned doctor and two other people, in addition to causing other individuals to be quarantined.

One of the doctors working at Ibn al-Nafees Hospital said that the bullying suffered by the infected pushes potential carriers of the disease to hide their condition from their communities and some members of the medical staff as well, adding that he witnessed many similar incidences among the patients who arrived at the hospital.

Clinical training for the fourth, fifth and sixth years’ medical students of the Faculty of Medicine in Damascus and Aleppo were suspended after the emergence of new covid-19 infections among persons who have physically contacted medical personnel in university hospitals.

The director of al-Qutaifa Hospital stated to media that this case led to another type of economic loss, saying: "the hospital administration contacted all the patients who entered the hospital since the 28th of last month, to conduct Coronavirus tests and to make absolutely sure that there are no infections,” noting that hospital personnel underwent all necessary checkups."

Al-Iqtisadi quoted three informants in Damascus as saying that the cost of one covid-19 test is estimated at 18,000 Syrian Pounds. It is a fast blood test that takes a minimum of five minutes.

Deputy Head of the Central Committee of the Federation of Syrian Chambers of Commerce proposed to start exporting the surplus of medical masks following the arrival of an aid shipment from China to combat the pandemic.

In Syria, most women are able to gain access to medical outlets, however, the ravaging financial crisis and the high cost of doctor and hospital consultations prevents everyone from being checked. Hanin says that the average doctor's visit costs between 4,000 and 6,000 Syrian Pounds in the city of Idlib.

According to leaks reported by Rozana, the Deputy Minister of Health in the regime’s government said, in a special meeting about the Coronavirus, that the situation in Syria has become dangerous due to the spread of infected cases locally, and that the matter is further complicated by the insufficiency of the local isolation spaces. 500 persons are currently stuck between the Syrian and Lebanese borders due to the limited capacity of quarantine centers.

Recently, the government of the Syrian regime quarantined Jdaidet al-Fadl, to join the areas of Sayyidah Zaynab, Saydnaya, Ras al-Maarah, and Tell Mneen.

Karbala governor Nassif al-Khattabi has previously confirmed to Anadolu Agency that most of his country’s citizens coming from Syria are infected with the Coronavirus. This indicates that the authorities have ignored their responsibility towards the spread of the disease since last March.

The World Health Organization (WHO) warned of the explosion of the situation in Syria in the event of an outbreak of the virus, saying that "only 64 percent of hospitals and 52 percent of health care centers currently operate in Syria, as well as 70 percent of health workers have fled the country.”