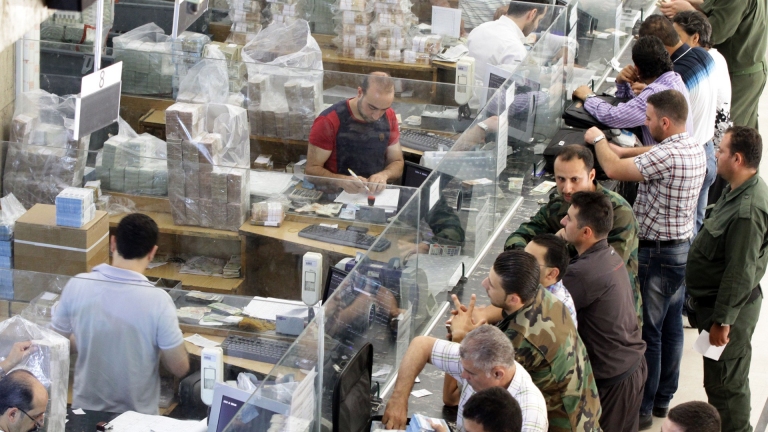 Syrians abroad are looking for alternative options and solutions to deliver money to their families inside Syria, especially after the Syrian regime’s government decided to impose restrictions on money transfers, and set the dollar exchange rate for remittances at less than half its ruling market price.

Rozana monitored a number of methods that Syrians use to transfer money to their families in the regime-controlled areas, the most prominent of which was the "hand to hand" delivery.

“Hand to hand transfers”: A must despite security services’ prosecution

The “hand to hand” method consists of two modes. The first is to entrust acquaintances to deliver the money, meaning that a Syrian citizen living abroad hands the amount over to afriend (who also lives outside Syria), so that one of the latter's relatives delivers the value of the amount to the designated family inside Syria.

The second way is to hand over the money through merchants living inside Syria, in exchange for placing the value of the transfer in bank accounts owned by these traders offshore. This method is applied by remittance offices in many countries where the Syrian Diaspora live.

Many Syrians living inside the country told Rozana that the Syrian security services are trying to eliminate “hand to hand” transfers by setting ambushes in public places where potential money handovers take place, pointing out that many people were arrested while receiving or handing money over.

In January 2020, the head of the Syrian regime, Bashar al-Assad, issued a decree banning the trade of non-Syrian currencies and imposed fines and penalties amounting to hard labor for a period of no less than seven years.

Economist Samir Kharrat stressed that the best way to transfer money to Syria now is to find someone to hand it over directly.

Read also: Who profits from dollars in Syria?


While talking to Rozana, Kharrat advised the Syrians not to wait further if they are intending to transfer money to relatives in Syria, as the Syrian pound’s turbulent situation will not be settled any soon, and not to sell gold except for the utmost necessity, and save it for the time of need, he said.

As for other areas in the north and east of Syria where the Syrian regime has no powers, money transfers are done in a smoother way mostly through private transfer offices present in those zones and away from the restrictions imposed by the Central Bank.

In a simple calculation, if a person wants to transfer $200 from outside Syria to his family at home, through remittance companies approved by the Central Bank, the amount is estimated at 2,500 Syrian pounds, while the value of $200 in the market reaches about 6000 Syrian pounds.

Many Syrians are transferring funds via offices outside Syria to several remittance companies at home, according to specific arrangements between the two parties. Several transfer offices involved in this kind of transactions, which Rozana managed to contact, preferred not to disclose details about the operations.

The money transfer reaches the recipient as an "internal transfer", which means that the beneficiary receives it with the value of exchange rate in ruling market price (not the rate determined by the Central Bank).

Temporary solutions to transfer money are not free of risk

Katia, a Syrian woman living in Istanbul, tried to send money via several transfer offices. She even thought about trying Western Union, but in this case the money will enter Syria through the central bank, which means that the amount will lose nearly half of its value, so she changed her mind.


Amal, who lives in Damascus, told Rozana: "Last week, I received a transfer from Turkey, and it was handed to me by someone I met in a store, and not through an office."

As for Khaldoun from Damascus, he said: "I asked my brother to send money over to Qamishli, which is controlled by the Autonomous Administration of North and East Syria, and then I travelled from Damascus to Qamishli in order to get the transfer so that I can benefit from the original value of the amount without losing half of it to the central bank."

Remittances are lifeblood for Syrians at home

Many families depend on the amount of money they received from their children or relatives.  In this context, Manar al-Muhammad, a widow and mother of two children, said: “My brother and sister are living in Turkey, so they send me a monthly amount  so that I can live and feed my children. Now, since the Syrian pound deteriorated, this amount has become insufficient, because prices increased dramatically.”

Um Omar, from Daraa governorate, who lives with her two widowed daughters and their children, told Rozana: “I have been living from remittances from my children in Germany, for 5 years now, and without it I would not be able to eat or feed those orphans.”

The money transfers, sent by the Syrians to their families at home, are a real lifeline for Syrian families nowadays, especially amid the high cost of living and the deterioration of the Syrian pound, according to economic expert Rasha Seroub, in a statement to Al-Watan newspaper.

The average income of an employee in the regime’s controlled area is 60,000 Syrian pounds per month. In light of the large and frequent rise in prices, the salary does not suffice for the cost of living for a few days, or renting a small house on the outskirts of cities and in the countryside.

It is worth mentioning that the fall of the Syrian pound against foreign currencies and the rise in prices led to demonstrations in many of the regime controlled areas, most prominent of which al-Suwayda governorate, where demonstrators demanded improvement in living conditions and held the Syrian government responsible for the deterioration of their conditions. The demonstrators also raised slogans calling for a change of the Syrian regime, headed by Bashar al-Assad.