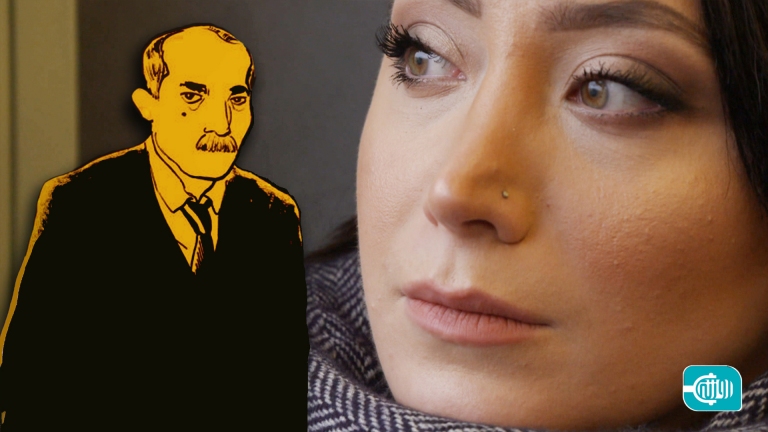 "He threatened me and told me that he will send me down again with the jailer to be electrocuted and tortured if I do not admit it now," says Nuran, the Syrian young woman facing the officer who tortured her for the first time after nine years, in court in Germany, but this time the officer is sitting in the dock to receive a sentence for the war crimes he committed.

Tareq Khelu - Rozana -- The first trial of Eyad al-Gharib and Anwar Raslan, two former officers in the Syrian regime’s intelligence, started today in the German city of Koblenz. Al-Gharib entered the courtroom completely covered, while Raslan’s face was exposed. The latter did not show any interest in his surroundings. All the witnesses, who knew Raslan, were there and testified against him. The atmosphere in the courtroom was loaded with mixed feelings of joy, sadness, and flagrant tension between the attendees.

Anwar Raslan is accused of 58 murders that were committed in the prisons of the Syrian regime, specifically in Al-Khateeb branch. At least 4,000 people were tortured there between 2011 and 2012.

Raslan seemed very calm and did not express any emotions in the courtroom. On the other hand, al-Gharib, the other officer facing charges of facilitating the torture of at least 30 persons after their arrest in an anti-regime demonstration in 2011, was nervously rubbing his hands and putting them anxiously on his head.

Nuran, a witness in the trial of the two Syrian officers, told Rozana: "I thought if we kept hesitating and sat in our homes, the popular movement will be repressed
and the regime's injustices will continue. I believed that the dictatorship would rule Syrian for several generations ahead. We had no choice but to protest. The situation was terrifying and difficult; however, this was our only option. We chose to take this path.”

Nuran used those words to encourage herself to participate in peaceful demonstrations, until she was arrested later. Today, when Nuran recounts those events, she gets nervous and her calm and nicely arranged features (long eyelashes, clear kohl, a modern haircut) change. Her neat look could not hide the traces of oppression on her face.

Nuran, a political science student, was in her early twenties when she was arrested at the time. She participated in the demonstrations and broke the taboo.  Several minutes later, the Intelligence officers started shooting randomly and chased the protesters, who fled in all directions, like hounds.

Nuran did not have enough strength to run quickly for a long distance, so she could not escape. She got arrested and transported in a bus to one of the security branches. Her long journey of torture in the Syrian regime's prisons started from branch 251.

Raslan began his military career at the police academy in Damascus. After graduation, he worked in the Immigration and Passports Department in Aleppo, then joined the Syrian Border Security Force in the Syrian north on the Turkish line. Later, he was reassigned to work with the General Intelligence Directorate.

In 2008, Raslan joined the Intelligence unit responsible for investigating and tracking the opposition. At the beginning of the revolution, he was promoted to the rank of colonel, which made him the most influential member of the internal branch 251, known as al-Khateeb branch in Damascus.

Raslan, 57, defected from the regime in September 2012 after 18 years of service in the General Intelligence Directorate. In the summer of 2014, he arrived in Germany and sought asylum, claiming that the Syrian regime had threatened to kill him. Afterward, he became an opposition activist and participated in the Geneva negotiations as an opposition delegate in 2014.

Eyad al-Gharib, who worked as an intelligence officer, defected a few months after the outbreak of the Syrian revolution.

Al-Gharib, 43, a former senior sergeant in branch 40, arrived in Germany in 2018. He was accused of arresting 30 demonstrators in Damascus, and chasing the protesters after the Intelligence services opened fire on them indiscriminately.

According to the prosecution, al-Gharib brought the detainees into the internal branch 251 for investigation, in the same way Nuran al-Ghamian was caught and arrested, when she could not escape her chasers.

Whoever enters in there shall be lost forever

Patrick Crocker, an international lawyer working at the European Center for Constitutional and Human Rights, indicated that torture is practiced in all the security branches in Syria, causing many people to lose their lives. The detainees are brought to these security units and tortured without charges or trial. Many of them do not know when they will be released, if they shall ever be.

The Caesar photos, which documented the death of more than 6,000 people as a result of torture, will play a major role in the trial. The photos show that three numbers are written on each dead body: "Number of the arrested person, the number of the security branch responsible for the arrest, and finally the number of the body." These numbers refer to the death machine, the Syrian Intelligence operating in a systematic way. About 100 photos of Caesar are from Section 251.

"The Caesar photos are invaluable, in terms of the evidence we need to clarify the regime’s crimes in general and to demonstrate that these crimes were systematic and not a mistake or an individual case, but rather are part of the policy of persecution," Crocker said.

In the summer of 2011, the General Intelligence sent an urgent secret telegram to all governorates. The telegram contained orders to all forces to carry out a "cleanup" campaign, meaning to clean the streets of people who call for demonstrations or provide information to foreign media outlets. The telegram stated that "they must not find a shelter or a place to hide. Reports must be sent on a daily basis to the Crisis Management Cell, including lists of detainees’ names." The telegram was signed by the "Syrian Crisis Management Cell," which was urgently formed at the time, in response to the demonstrations that were spread in the country.

After the investigation, Nuran was sent to a single cell, with an area of no more than one square meter. At the subsequent investigation session, the young woman pleaded with the officer to send her to the collective cell, where forty or fifty women are obliged to sleep and sit in one room. For Nuran, this was better, since she can find people to talk to, but her tormentor did not have mercy on her. The man who refused her request was Anwar Raslan, one of the accused people who will appear before the Supreme Regional Court in Koblenz, Germany today.

"There were people thrown on the ground in the corridors. They had torture marks and blood stains. There were dead bodies coming out of the prison on a daily basis, belonging to people who died from torture or due to poor ventilation or other practices by the regime. The dead bodies were actually coming out of this place," Nuran clarified.

Syrian lawyer Anwar al-Bunni said that the International Court of Justice is closed before the Syrian file, because Syria is not a member of the International Court of Justice agreement, but Germany has adopted the principle of "universal jurisdiction" on the grounds that this type of crime is directed against humanity and not only against the region where the crimes were committed.

"With regard to justice, the position of the person does not matter, whether he is from the opposition or from the regime," said al-Bunni. He believes that the perpetrator of the crime against humanity must be punished, regardless of his political position, or position on the right cases, and he is therefore a criminal, regardless of the nobility of the case he is defending, or his religion or nationality.

Crocker, who spent many years following up on human rights files in Syria, said that "it is the first trial in the world against a person from al-Assad’s regime, for crimes against humanity, and because of torture. The crimes have been committed tens of thousands of times in Syria, and we will not be able to forget them for decades. This trial will have a historical role in revealing the truth."

Anwar al-Bunni and Patrick Crocker, who together collected many testimonies, consider that there can be no peace for Syria without justice.

As for Nuran al-Ghamian, she still has a lot to do for justice. Her testimony in court is just as important as her participation in the demonstrations at the beginning of the revolution. It is rather a continuation of the revolution, she believes, as she took to the streets of Damascus to demonstrate for freedom, and to make her way today to the Koblenz Court for Justice and Freedom.

"I am grateful to the German government for this step. We will finally see justice, even in a small portion, being achieved in this world. There are those who try to help the oppressed for their right. I hope those who are like Anwar Raslan and have harmed so many people will all be pursued. I wish this will be done inside Syria one day, against the people who are still practicing torture to this day," she added.