Top Secret: An Unknown Camp for French Jihadists in Syria 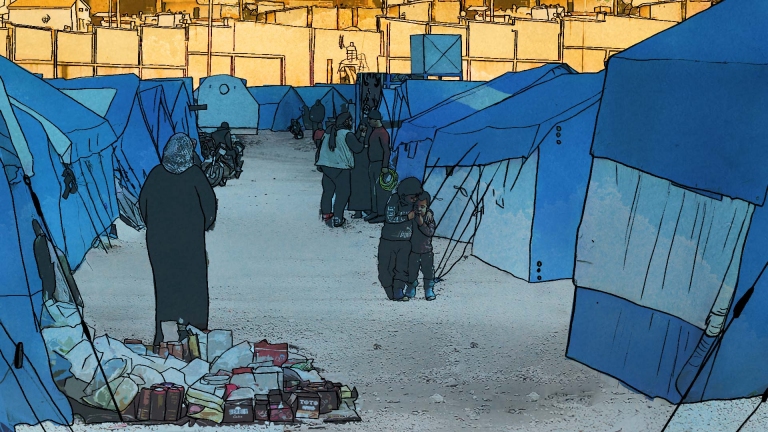 Mais Katt - Samira Alhasan| French jihadists live in a camp called “French camp” north of Idlib; a hidden camp with high walls and barbed wire behind which they hide the details of the lives of former ISIS fighters,  taking instructions from a French Senegalese prince.

On the journey toward gathering details of the “French camp,” we spoke to displaced people who live around the camp, or workers who enter it regularly because of the work they do there, or people from the area, all of them were discreet and afraid.

Since the French camp is a red line for Hayat Tahrir al-Sham (HTS), the jihadist organization that controls the region, communicating with jihadists and their families is a taboo. Thus, talking about taboos may take one to the hell of the HTS, known as the Al-Nusra Front in Syria.

This investigation was carried out for the Rozana Media Foundation, as part of the "Syria In-Depth" project, in cooperation with the Guardian Foundation and the Danish IMS. 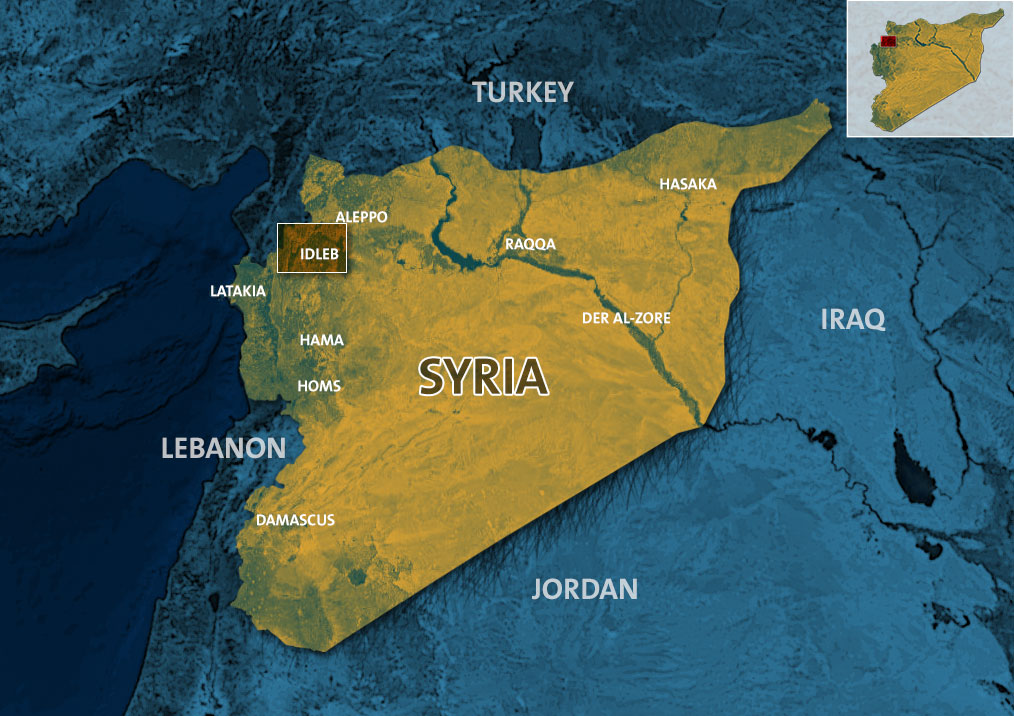 The Blue Camp was established in 2014, and according to the residents of the camp, the majority of the population is composed of civilians displaced from the northern Hama countryside, and the number of tents is estimated at 200, each family having one.

But, the population increased since 2018 due to the successive waves of displacement and the Syrian regime's bombardment of villages, especially in the southern countryside of Idlib, so the camp population has increased and it currently comprises about 300 tents. 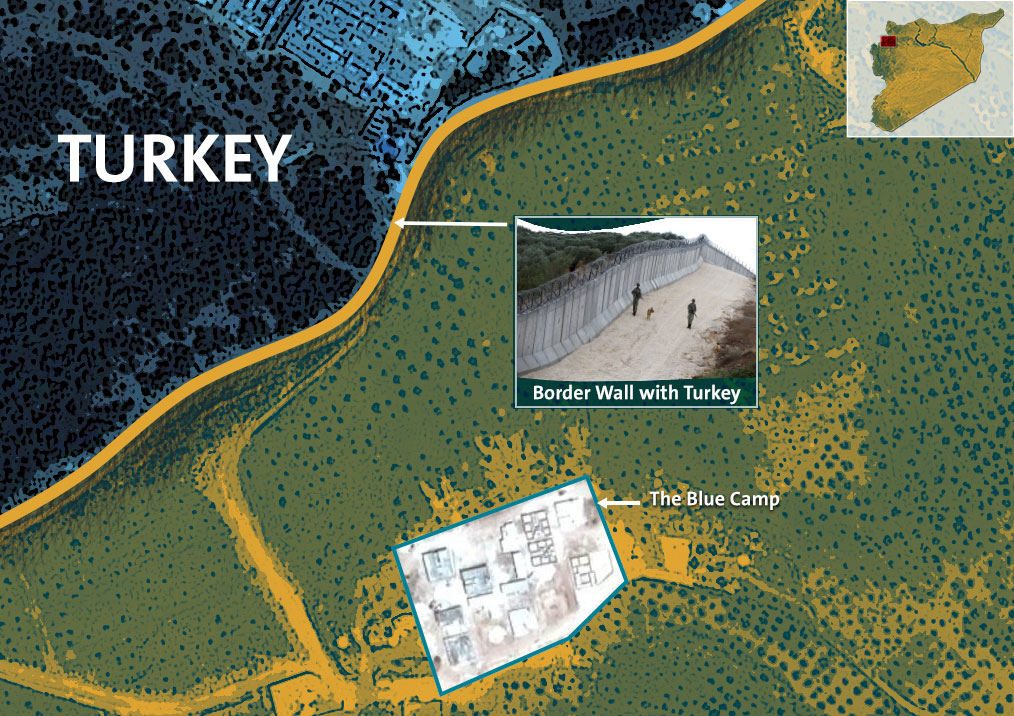 According to different local sources, who provided us with this information, 70 people live in the French camp, most of them are ex-ISIS fighters, some of whom have more than one wife, and they also have their children.

“They used to live in France before they moved to Syria. Some of them look like Arabs or Africans, while some of them have an European shape,” said Abu Mohammed, a pseudonym for a resident of the region.

Abu Mohammed, who often visits the Blue Camp, added that some of the French camp residents are former civil servants who run ISIS civil or administrative affairs, while the majority includes ex-combatants.

He clarified that most of these were living in villages that were controlled by the jihadist organization at the beginning of the war in Syria, such as the village of Dana, and the village of Zarzur, Zardana and al-Zanbaqi in the northern countryside of Idlib. After the withdrawal of ISIS from Idlib, many foreign jihadists surrendered to Al-Nusra Front, which controlled a large part of Idlib at later times. Some of them retired from the fighting and were assembled in “Iskat al-Zahra” village, and then their housing was secured in the French camp that was established inside the Blue Camp on the Syrian-Turkish border in Harem, north of Idlib.

Since the fall of ISIS, we have seen the international community torn apart over what to do with the families of foreign jihadists who were captured or killed in Syria and Iraq. More than 70,000 foreigners from forty different countries reside in Al-Hol camp in northeastern Syria, and the Kurdish authorities controlling the region are pressing to return these to their countries. Paris said that it is studying the files of its French citizens in northeastern Syria on a case-by-case basis, while no one ever talks about the “French camp” north of Idlib, nor about the French people who have been there with their families for years. 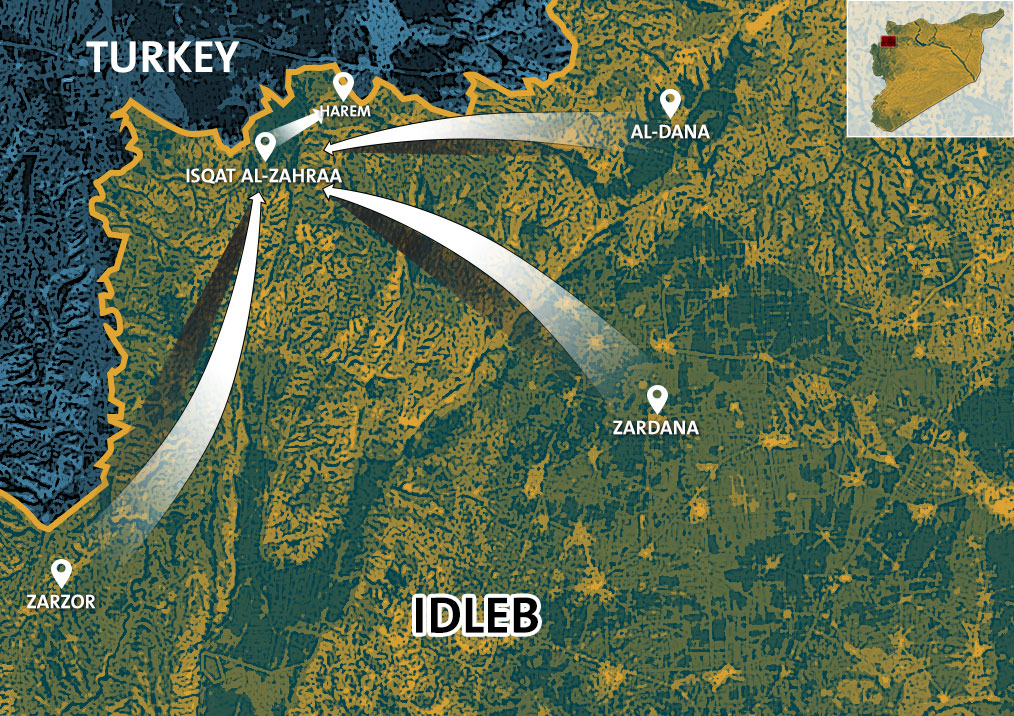 The residents of the “French camp” are separated from the residents of the big Blue Camp. Malek, a resident of the Blue Camp, says that gunmen from the “Firqat al-Ghuraba” guard the main gate and sides of the camp. “They put strict conditions on entry and exit, so only sanitation workers and aid workers in and out are allowed; whereas, fighters of Firqat al-Ghuraba used to move freely inside and outside the camp, and even go to fight on the fronts and return from them in many cases, but some Blue Camp residents can enter the French camp when there is work they do there,” added Malek.


Their tents are different from ours...
The citizens of the “French camp” live in prefabricated rooms (as it appears in the picture), which appears rare in other camps in the whole region. The residents of the Blue Camp said that they saw concrete rooms that were built by the people of the camp after the provision from the sponsoring organization of the two camps, and that the people of the Blue Camp asked to allocate prefabricated rooms or raw materials so that they could replace their meager tents with simple walls, but no one responded to their demands.

During our research process, we were able to reach Ayman al-Hallaq, who previously worked with Khairat Humanitarian Organization, which handles the matters of both the Blue and French camps, and oversees all needs related to food and public services. "The French camp has three cooks working in a tent that was created as a kitchen," said Ayman, stressing that the three cooks are French of Arab origins and one of them is Damascene called "Abu Humam al-Dimashqi." 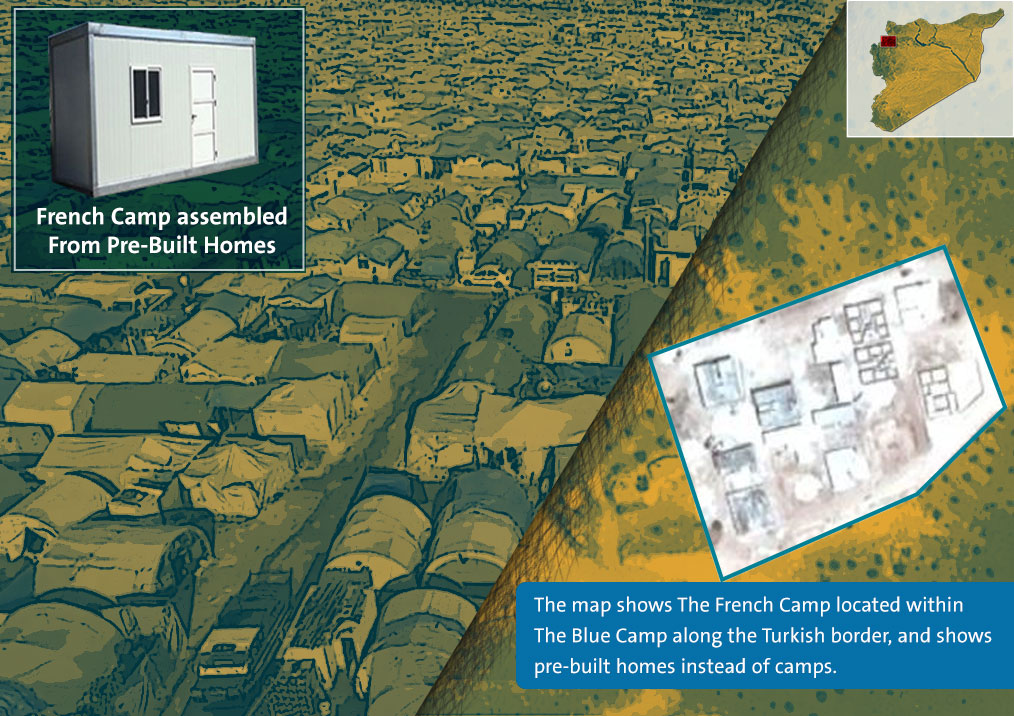 A French doctor of Albanian origins lives in the French Camp, and he is nicknamed Abu Dhafir, according to Malik, one of the residents of the Blue Camp, while a nurse visits the camp every few days. In case of women's health problems, or births, one of the popular midwives is brought in from the Blue Camp. "Patients are transported by ambulance to the hospital sometimes, but tightened security by the militants of Firqat al-Ghuraba accompanies the patient," said Malik.

He added that "young children in the French Camp are taught Islamic religious lessons, in Arabic and sometimes in French." Children learn for three hours a day in a large tent run by a teacher called (Abu Muawiya al-Jazrawi), who is French of Algerian origins. Boys are of course separated from girls during education. Malik said that he saw a tent dedicated to teaching little girls in the camp where a female teacher is teaching.

The most dangerous jihadist wanted by the French authorities is "Omar Omsen," known as "Omar Diaby." He lives in a camp with his three wives and a number of his children. He made himself the prince of the French camp. People call him "Abu Aisha Dibuzan." Omar Diaby used to leave the camp and live in homes in different areas of the Idlib countryside, but he did not leave the camp for nearly a year.

The French authorities consider him the most dangerous French jihadist and the most successful in attracting and recruiting new elements. He is responsible for recruiting more than 80 percent of French-speaking jihadists, and he was the first to launch propaganda videos mobilizing young people in France to join jihad in Syria.

Omar Omsen grew up in the city of Nice, in the south of France. He moved to live there and spent several years in prison on criminal charges in his youth before going to Syria in 2013 to head a jihadist battalion. 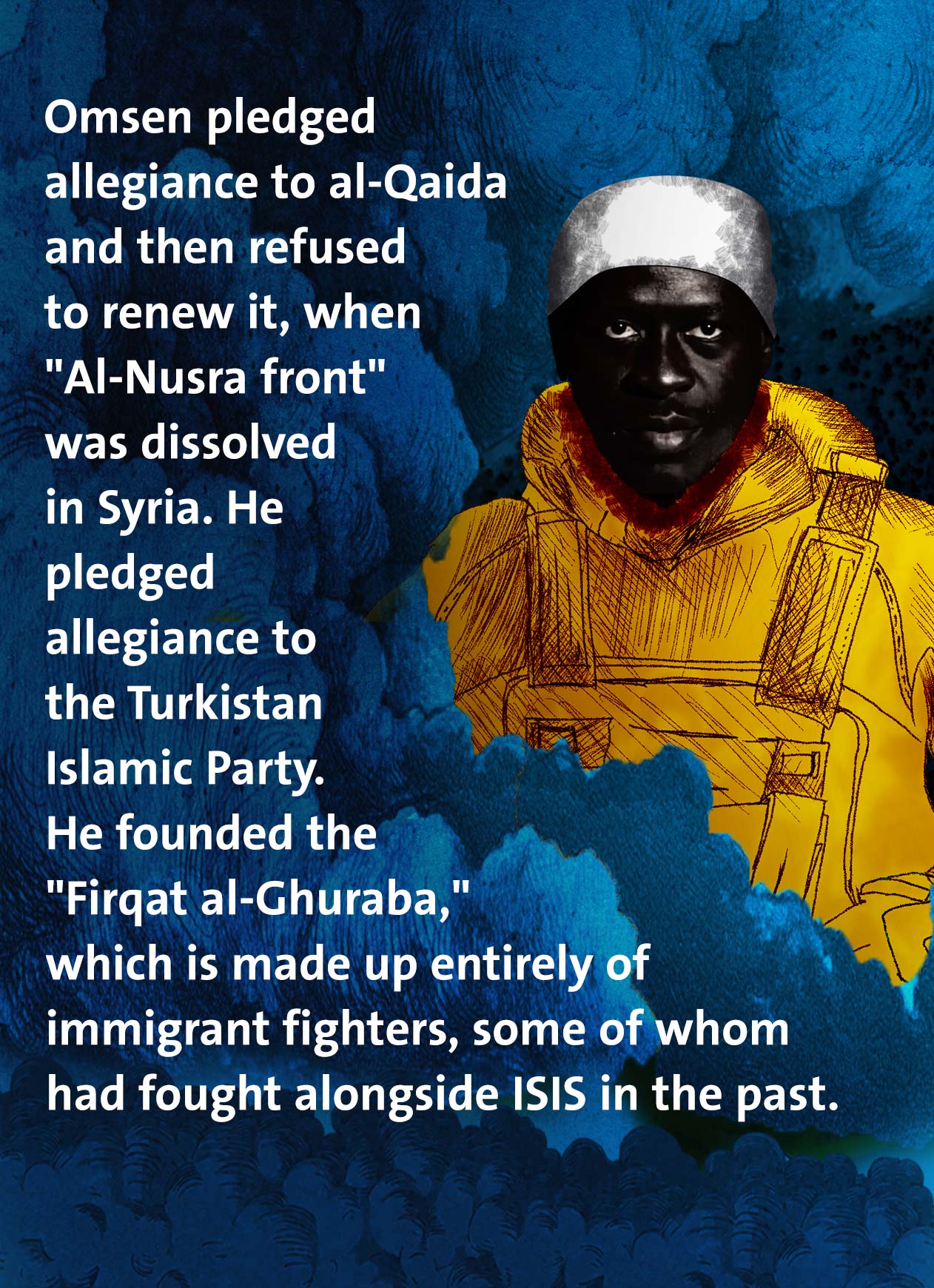 Omsen pledged allegiance to al-Qaïda and then refused to renew it, when "Al-Nusra front" was dissolved in Syria. He pledged allegiance to the Turkistan Islamic Party. He founded the "Firqat al-Ghuraba," which is made up entirely of immigrant fighters, some of whom had fought alongside ISIS in the past.

Omar Diaby is a deputy for "Ayman Qaddoun" known as "Abu Diab Sarmin," the current leader of "Hurras ad-Din" faction, after Al-Baghdadi was killed in northern idlib at the end of last year.

The Prince and the European child

We got exclusive information from within the French camp about the French-Belgian girl, "Yasmine," who was handed over to the Belgian embassy a year and a half ago. The child was detained by the Prince of the French camp, "Omar Diaby," inside the French camp for a long time.

That was after her father was killed while fighting in the ranks of "Firqat al-Ghuraba," and "Diaby" was bargaining with her mother to pay a large financial ransom for the delivery of the child.

At the time, Hayat Tahrir al-Sham raided the French camp and arrested seven men. Omar Diaby himself was arrested near the town of Atma in Idlib countryside, on charges of kidnapping Yasmine. Then "Firqat al-Ghuraba" agreed to hand over the child to the Salvation Government of Hayat Tahrir al-Sham (Al-Nusra Front), in exchange for the release of the famous jihadist "Omar Omsen."

Rozana had obtained photos of the delivery of the child, Yasmine, to the Belgian embassy in Turkey, in the presence of representatives of the Turkish government. Ibrahim Sacho, named as Minister of Justice at the Salvation Government, said during a press conference held at Bab al-Hawa crossing on the Syrian-Turkish border, and next to him the child Yasmine: "There is a lawsuit filed by the Belgian mother requesting custody of her daughter after her father was killed, and the court ruled to hand the girl over to the mother because she is the most worthy of it, as the child was living with her father's friends." However, what he did not mention is that the child was actually being held by Omar Diaby, the most famous French jihadist ever. 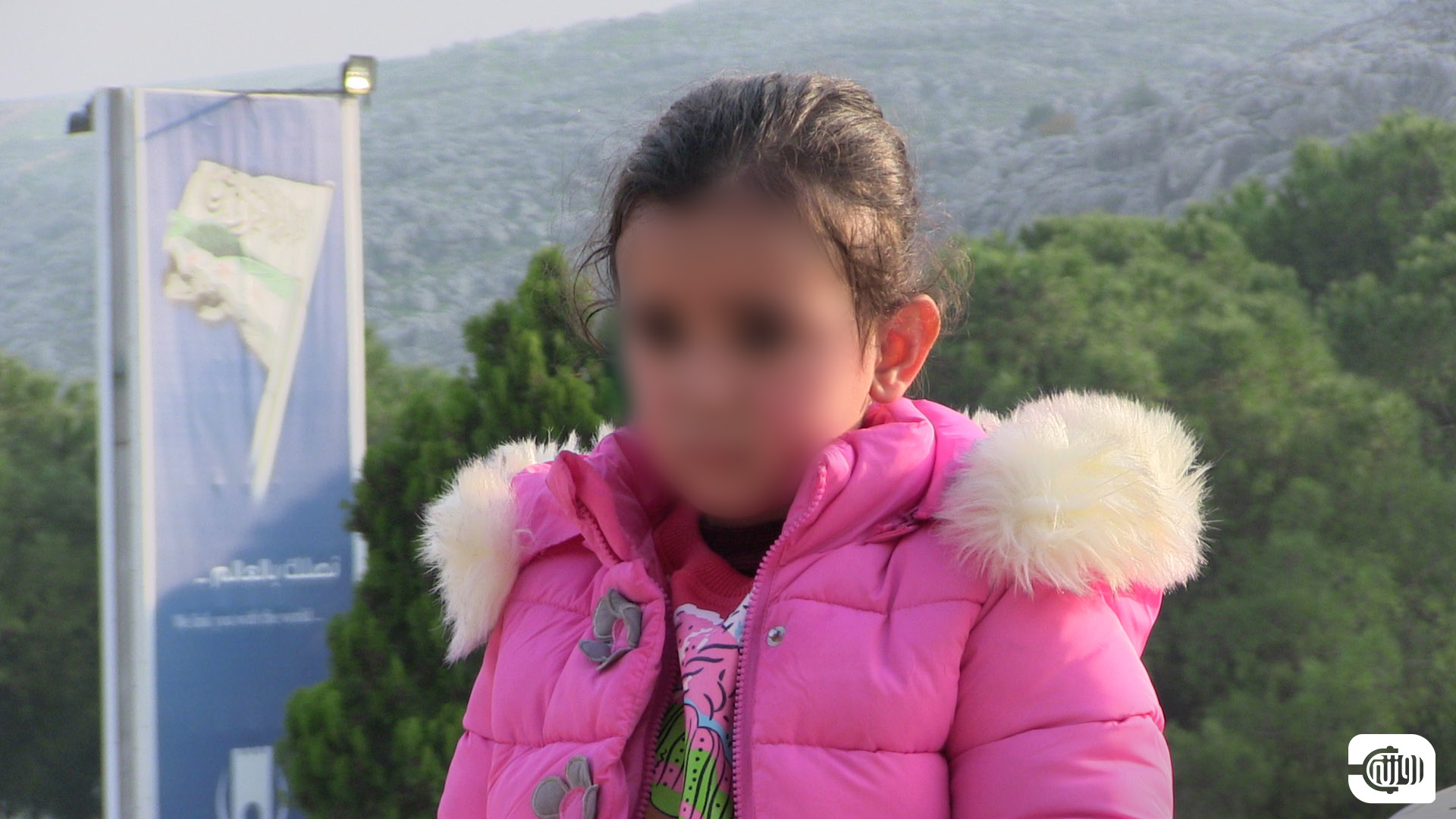 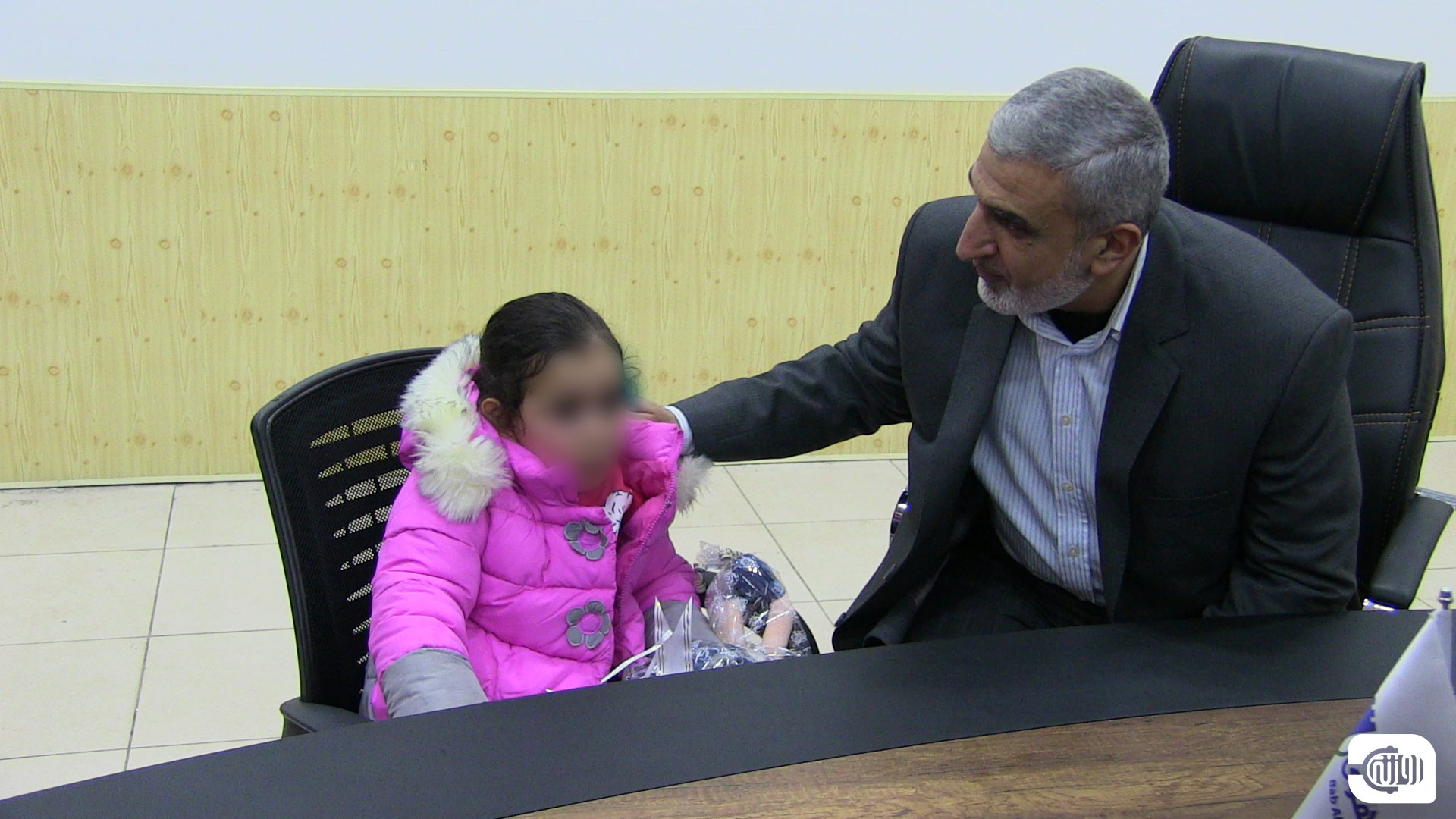 Yasmine is not the only French-Belgian child who has returned from Syria to Europe. There are more than 250 French children held in multiple locations in Syria, according to France 24. A few French children returned to France during the past year to receive French social services.

Marie-Dossy is a French lawyer representing twenty French families and has been handling cases for more than 60 children in French courts in the past two years. She calls for the return of French children in Syria and Iraq to France, considering that these children may become "time bombs" if they stayed in Syria because some mothers, fathers and terrorist groups who are there want this. 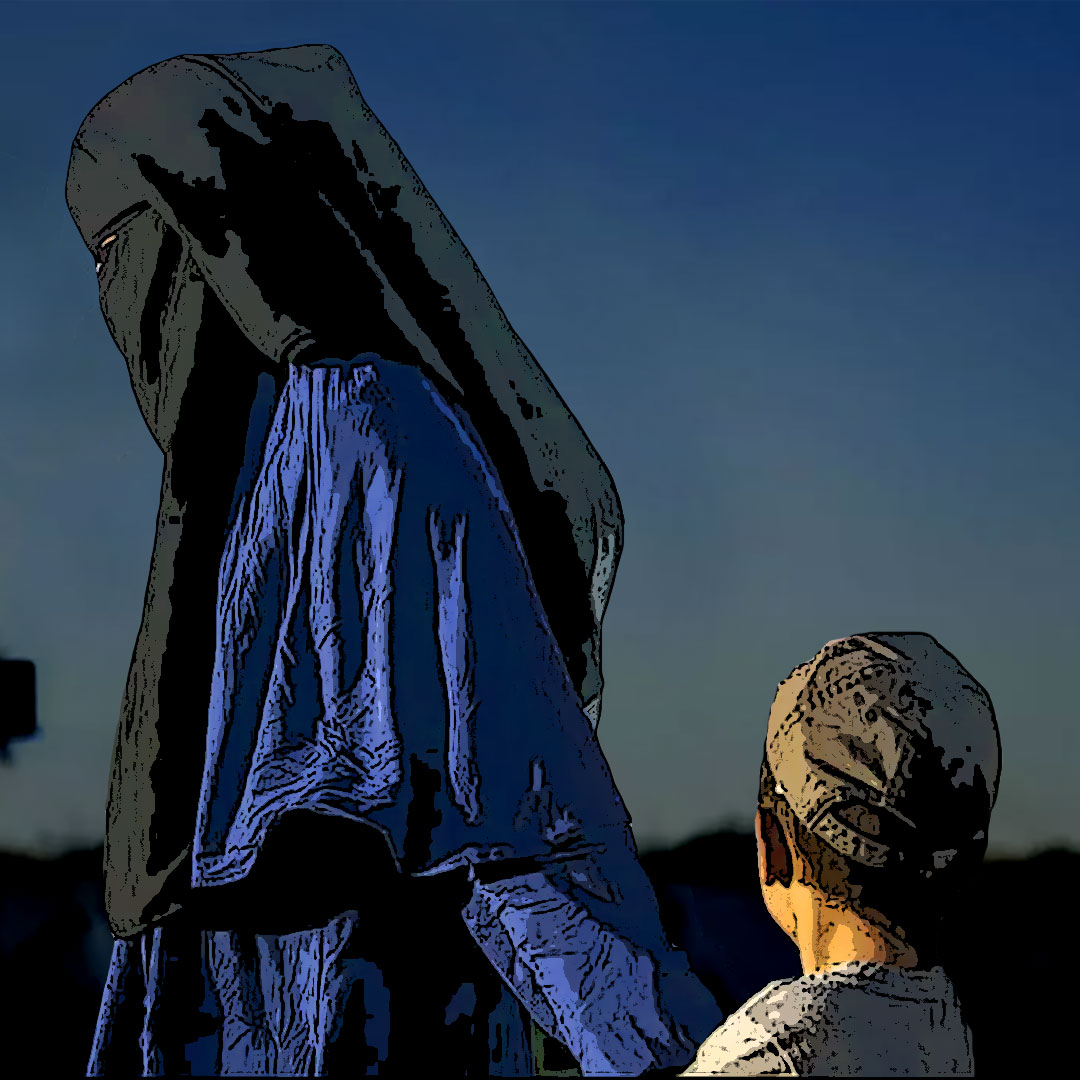 The French government is not showing a clear willingness to recover its citizens, who seem to find it very difficult to obtain fair trials in Syria where no judicial authorities or coherent government system allow this.

There is an intense debate in France over the issue of the French jihadists and their families in the Al-Hol camp in Syria and in Iraq, but with no public sympathy for them. French President Emmanuel Macron is under great pressure after French citizens in Iraq were sentenced to death for joining ISIS. France is a country that opposes the death penalty, but prefers to keep the jihadists in the Middle East and try them there, not in France. The French government has refused to take back Islamic State fighters and their wives. It described them as the "enemies" of the nation, saying that they should face justice, whether in Syria or Iraq. Lawyers say that when France prevents its French citizens from returning home and obtaining a trial in France, it violates the text of the European Convention on Human Rights, which says: "No person shall be deprived of the right to enter the territory of the country of his nationality.”

We tried to communicate with the French government regarding the "French camp" and its knowledge of or dealing with issues related to its citizens stranded in Idlib, but we did not get any answer. While the French media is talking about the French citizens present in Al-Hol camp, the file of the French jihadists and their families in the "French camp" north of Idlib remains indefinitely confidential ...