After al-Lataminah Chemical Attacks ... Will the Security Council Dare to Launch Military Intervention? 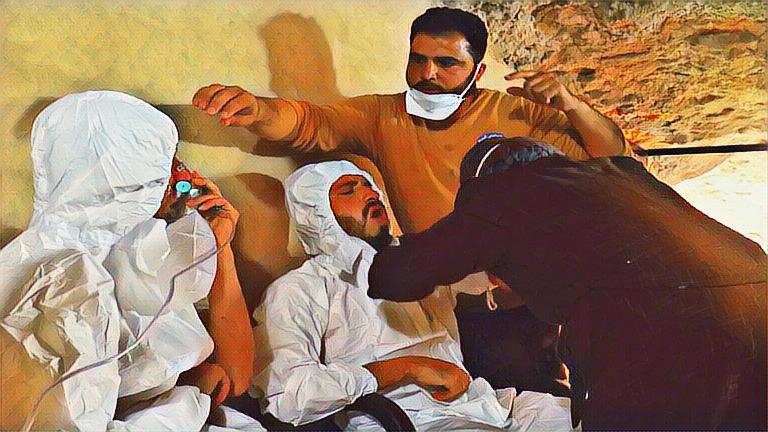 Many legal questions arise about the impact of the report issued by the International Commission of Inquiry on the use of chemical weapons in Syria "IIT", concluding that the Syrian regime is the main responsible party for the chemical attacks on the town of Al-Lataminah in Hama countryside (central Syria).


The report issued yesterday, Wednesday, clearly indicated that Damascus was responsible for three chemical attacks that had taken place in March 2017.

The report is a tool for legal prosecution in the courts for the coming period. It is considered as a proof used against the Syrian regime.

For the first time, the Organization for the Prohibition of Chemical Weapons investigation committee held the Syrian regime responsible for "chemical weapons attacks."

The story began on March 24, early in the morning, the meteorological situation in the area was appropriate to carry out a sortie mission.

Light winds, clear skies, and ground temperature around 4 to 5 ° C, with a strong reflection of the surface temperature. The sunrise was around 5:30. These conditions were suitable for the use of a non-permanent agent such as sarin.

Although it did not obtain the order hierarchy when carrying out these attacks, the Chemical Weapons Organization asserts in its report that these attacks take place only on the orders of the highest levels of the Syrian regime's forces. Colonel Mustafa Al-Farhat explains this point extensively.

In an interview with Rozana, al-Farhat (who was an Air Force officer prior to his defection) indicates that directing bombing orders with the Air Force is related to the nature of military missions.

There are highly secretive missions. Targets shall be prepared in advance and placed in an envelope sealed with red wax that will be placed  in the bag of the brigade commander and seen by 3 persons only in military airports, including a security officer.

In case of chemical weapons related operations, the Colonel affirms that they are among the missions with the highest secrecy. The Air Force Command sends the sealed envelopes (General Jamil al-Hassan's office), so that the brigade commander cannot know their contents.

He noted that these tasks are assigned exclusively by the commander-in-chief of the army (Bashar al-Assad), adding that "no one can issue the decision to load and use chemical weapons other than the commander-in-chief of the army. Only three people are briefed on this type of mission, namely the commander, the officer who will carry out the operation, and Major General Jamil Hassan, head of the Air Force Intelligence Directorate."
The Syrian regime’s air force has established a tracking unit, whose mission is limited to storing and producing chemical weapons, and it is called the chemical weapons unit, which is located near al-Dumayr Military Airport in Damascus countryside.
At that time, al-Lataminah was considered as an important logistical centre for the Army of Glory’s (Jaysh al-Izza) fighters, as it was used to resupply the units operating in the area. Thus, the opposition factions used the nearby town of Khan Shaykhun as a base to launch some initial attacks in March 2017.
After reviewing the report of the International Commission of Inquiry, other parties were held responsible for what happened in al-Lataminah, even if to a lesser degree than the army commanders who ordered the attacks, including the Commander of the 22nd Division of the Syrian Air Force Major General Malek Hassan, the commander of the 50th Division, Brigadier General Ibrahim Mahalla, and the captain of the Shayrat Airbase Brigadier General Ali Hassan Mansur.

International law lawyer, Bassam Tablieh, said in an interview with Rozana that the decision condemning the use of chemical weapons followed a lot of evidence related to the testimonies of doctors, the victims of the attacks, soil samples and samples of chemical weapons such as projectiles and other objects.

Tablieh stressed that the decision constitutes compelling evidence that can be used to condemn the regime, calling on the international community to take the initiative to adopt the Syrian people’s demands to "delegitimize  the regime and replace the current political system in a way that is compatible with the Syrians’ aspirations, as the use of chemical weapons against the defenseless Syrian people is a clear violation of international laws, and the treaties that the regime had previously signed, according to which the authorities pledged to dispose of chemical weapons.”

He indicated that the UN Security Council Resolution 2118 (September 2013) demanded the regime to hand over chemical weapons, asserting that in the event that the Syrian authorities do not comply with the decision, the competent parties shall apply paragraph 21 of the resolution in order to take the necessary measures to implement the disarmament under Chapter VII (i.e. the use of military force).

Tablieh conveyed that it is "legally established that the Syrian regime did not abide by the UN resolutions, which means that the UN Security Council must take the necessary decisions now in order to overthrow this illegitimate regime."

Chapter VII is the only charter that allows the use of force based on the resolutions issued by the United Nations and the UN Security Council.

Based all the obtained and analyzed data, the OPCW investigation team concluded that there are reasonable grounds to believe that:

(A) At approximately 6:00 am on March 24, 2017, a Sukhoi Su-22 Fitter belonging to the 50th Division of the Syrian Air Force. The helicopter, departing from the Shayrat Airbase, dropped an M4000 bomb containing sarin in the south of al-Lataminah.

(B) At approximately 15:00 on March 25, 2017, a helicopter belonging to a warplane of the Syrian regime’s air force, leaving from Hama Air Base, dropped a cylinder on a hospital in al-Lataminah. A chlorine gas cylinder fell on the hospital’s roof. Consequently, the building’s ceiling fell apart and at least 30 people were injured by the chemical substance.

The fact-finding mission stated that two helicopters dropped four cylindrical barrels on al-Lataminah Hospital and the surrounding area. Thus, doctor Ali Darwish, who was at the operating room at the time, died due to inhaling the gases.

Four scenarios to carry out the attack:

At approximately 6:00 on March 30, 2017, a Sukhoi 22 military aircraft belonging to the 22nd Brigade 50th Brigade. The force departing from the Sha’airat Air Force Base, an M4000 air bomb, containing sarin in the south of al-Lataminah, affected at least 60 people. According to the Documentation Center in Hama countryside, ten people were killed and ten were suffocated.

Al-Lataminah Cave Hospital is located two kilometers northwest of the town center, near a network of tunnels, which are partly used by opposition fighters.

The first cylinder fell to the surface, the second cylinder fell at the door of the other cave which is used as an exit, and although the door was closed, the gas leaked from under the door.

The testimony concluded that there are multiple forces belonging to the Syrian army’s land and air forces, and the forces of Suhail al-Nimr, and according to SANA, these forces were stationed in the area to fight al-Nusra Front.

How did the OPCW collect evidence?

The organization says that it obtained information through interviews conducted directly by those involved in conducting the investigation, as well as analyzing samples, reviewing laboratory results and analyzing ammunition residues and reports, in addition to advice from experts, specialists and forensic institutes, as well as other relevant authorities, materials and sources.

The organization states that the opposition factions and civilians living outside the regime’s areas of control depend on the observatories networks of the aircraft from its inception until the end of its mission, as it constitutes the so-called early warning service of protection. According to the report, these observatories do not achieve the required efficacy, as chemical gases leak into the basements and the ground.

The organization said that it had reviewed the international coalition's air traffic in March, and said that the coalition had carried out air strikes in the following four areas only: Raqqa, Deir ezZor, Idlib and Aleppo.

It indicated that the international coalition aircraft were not present in northern Hama or southern Idlib within these dates 24, 25 or 30 March 2017.

According to analyzes, the chemical file (i.e. a group of chemicals) for sarin used in al-Lataminah on March 24, 2017 is closely related to the expected chemical coil of sarin produced through a binary reaction of the method- created component (DF) as well as the use of precursors and raw materials, which are followed by the Syrian Arab Republic in the Sarin program.

The report issued by the investigation team, which mentioned no accountability for Russia, the main ally of the Syrian regime and its direct supporter militarily since its intervention in Syria (September 2015). This lack of accountability may raise several question marks, especially since field facts at the time were referring to the fact that Russia was aware of all military air movements, which means no movement was made without its permission.

In October 2015, one month after the Russian intervention, Moscow agreed with Washington to establish a communication channel between the two parties for air coordination between their forces in the Syrian airspace, indicating that the Russian control of the Syrian airspace was taking place more than a year and a half before the chemical attack on the town of al-Lataminah.

Some previous UN reports, as well as statements attributed to high-ranking officials in the United States and the European Union agreed that Moscow had provided in recent years an almost permanent support for Damascus in its military operations. However, the report of the chemical investigation team did not explicitly insert the name of Russia and did not mention any responsibility attached to it in that attack on the town of al-Lataminah.

Dr. Amr El-Deeb, a specialist in Russian affairs, said in his talk to Rozana that separating Moscow and Damascus positions could not happen, for exempting Russia of accountability is rendered to its political and diplomatic support for the regime which was accused of the chemical attack.

He continues, considering that the United States may have sought to remove any accusations against Russia in an attempt by Washington not to exert pressure on  Moscow in the current period, especially since the investigation decision came hours before the “OPEC Plus” meetings, and Washington really wants to win the Russian position in this file.

Dr. El-Deeb added: "These decisions and reports do not exceed the media influence, and they will not have any legal effect, and the reason is the Russian veto, along with the Chinese veto."

Between accusing and achieving justice by transferring criminals and those responsible for these chemical attacks, and after nine years of monitoring the violations committed by the Syrian regime and the absence of real accountability, or any development in the file of detainees and forced disappearance, Basil al-Qasim, a media activist who documented many of the violations committed by the Syrian regime in the Hama countryside, said: "There is no hope for justice today. The international community is an accomplice to al-Assad. Every party is concerned about its own interests, and if they wanted to hold al-Assad accountable, they would have held him accountable nine years ago.”

Likewise, activist Mohamed Hamwi says: "We rule out the achievement of justice because of Russia's protection of the Syrian regime. Even though the people of al-Lataminah hope to achieve justice, the criminals will protect criminals."