Women in Raqqa Still Chained Despite Departure of ISIS 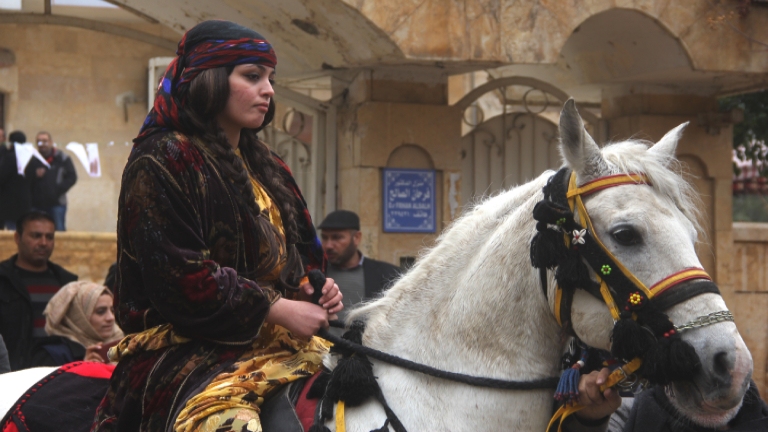 For the third year in a row, women of Raqqa, northern Syria, witness International Women's Day without ISIS, which controlled the governorate for four consecutive years, and imposed provisions on women whose effects are still present despite its departure.

With the control of the Syrian Democratic Forces (SDF), the military arm of the Democratic Union Party (PYD), over Raqqa in late 2017, women's presence in local councils, civil society organizations, and many other areas has been evident, as was the case before the emergence of ISIS in early 2014.

Mona Freij, a feminist activist from Raqqa, pointed out that the current authorities, represented by the Kurdish Autonomous Administration, have no real interest in the issue of women, as tyranny and repression against women is still ongoing, but in a different way.

"We cannot say that women in Raqqa have been liberated with the departure of ISIS. The current authority does not allow women activists and groups to carry out any activity without approval or partnership with the Women's Committee of the Autonomous Administration Local Council. The authority also exploits the issue of women in favor of its political agendas. The march that we saw several days ago by dozens of women who raised photos of Abdullah Öcalan, leader of the PKK, in the city of Raqqa, could be an example of that. I am certain that 90 percent of these women do not know who Ocalan is, yet the Women’s Committee in the Civil Council exploits the issue of women and monopolizes it for its own interests.  This is in addition to the improper way with which they deal with women's issues and which led to the divorce of many women due to their unstudied intervention in family issues, without knowing the societal context of Raqqa," said Mona.

She added that "in addition to the repression of the authorities, there is the repression of society. We still have customs and traditions that limit the work of women. It is true that we have seen a good percentage of women employees and workers in the recent period, but this is due to the spread of poverty and the deterioration of the living conditions in the region, and not because there is awareness of the importance of the work of women and their participation in society. "

Mona further explained the impact of ISIS on the women of Raqqa, saying: "The effects of the ISIS era are for sure still evident in many women, especially the category of girls and female adolescents, who have been greatly affected by the dark period during which women had been oppressed and became trapped in their homes, only seeing scenes of blood, beheadings and terror. We can even see that the games of little girls in Raqqa have become inspired by extremism, such as playing the game of the female police who were suppressing women in Raqqa during the rule of ISIS and arresting them because of their clothes. Unfortunately, there are no effective programs to solve the psychological problems of women of Raqqa from the effects of extremism."

"We can thus say that tyranny is the biggest obstacle for women. If we get rid of this tyranny, there will be space for public freedoms, and we will then be able to work to educate society as a whole about the importance of women's work, their participation and their presence in decision-making positions," Mona concluded the interview with Rozana.

For her part, Hala al-Ali, coordinator of the Women's Forum at the House of Citizenship in Raqqa, considered that women have returned to their normal lives, of which ISIS had deprived them during the past years, which women were its main victims.

"Women are currently working and are active in society. We can see them in official institutions and civil society organizations. Girls who have been deprived of education now have a new opportunity to go to schools. Unfortunately, customs and traditions still constitute an obstacle to women's work and their real participation in society. In addition, the ideas that ISIS had instilled in people's minds led to imposing more restrictions on women. Moreover, one of the biggest difficulties for women is the lack of economic independence, as they are still subordinate to men in our society. This is in addition to male-biased thinking and men's non-conviction of the necessity of granting women freedom. As a civil society, we are working to raise awareness of the need for women’s participation in all areas of life, yet the road is still long and difficult," said Hala.

She went on saying that "the war generated many social problems for women in Raqqa. A large number of widows have lost their breadwinners and do not have the sufficient experience to work nor any source of income. The marriage of minors has also increased dramatically due to poverty and the difficult living conditions. This is in addition to the parents who let their young daughters marry to get rid of their burden and expenses, and women who married foreign ISIS fighters, during the years of its control over Raqqa. Nowadays, there are many ISIS fighters widows who gave birth to children with unknown parents or having no papers and documents.”

For her part, Kafaa Al-Muhammad, a teacher and civil activist in Raqqa, believes that all that is being promoted about women empowerment, after the departure of ISIS, are mere rumors. There are actually no serious steps to improve women's reality.

Kafaa says: "It is true that women participate like men in the chairmanship of all institutions and committees in the Autonomous Administration in the so-called joint leadership between women and men. However, our presence as women in these positions is ineffective. Males decide individually and the task of the majority of women in these positions is limited to stamping and signing. Most organizations in Raqqa claim that they are concerned with women's issues and say a lot about it, but indeed they are taking advantage of this issue to draw attention and bring in funding and support from donors, while the majority of workers in these institutions and organizations are males.”

She added, "Undoubtedly, women in Raqqa are facing huge difficulties and challenges, since our society is considered a patriarchal society and women are considered dependent on men. The most notable challenges that women face are themselves, their underestimation and lack of confidence in their capabilities due to the marginalization of society that is still persistent.

Female employees and actors in society face many difficulties and harassment, according to Jury Matar, a media figure from Raqqa, who told Rozana that she never imagined herself facing this large number of harassment and bullying, only because she is a female working in the media sector and appears on screen.

Jury added: "I started working in the media field two and a half years ago as a reporter for a local radio station in Raqqa. When I go out on the street for filming or to interview people, I get harassed because of my clothing and other personal matters. Sadly, I was bullied not only by the general public, but also by people working in civil society organizations, and they are supposed to be responsible for women support and empowerment programs. They bullied me several times. I got frustrated. I am currently surrounded by so much psychological pressure that I thought of quitting work and sitting at home. Yet despite all that, I will continue the work I love and try to be strong. I think bullying and the oppression of women increased in Raqqa after the onset of ISIS. Before 2014, the situation was different, but apparently ISIS has succeeded in implementing its ideas among many people in our society. We hope that there will be effective programs to deal with this, not like the current campaigns that I see as forma and useless. ”

According to a study conducted by GIWPS, in 2019, Syria ranked "165" globally out of "167" countries, in the list of the most suitable countries for women to live in