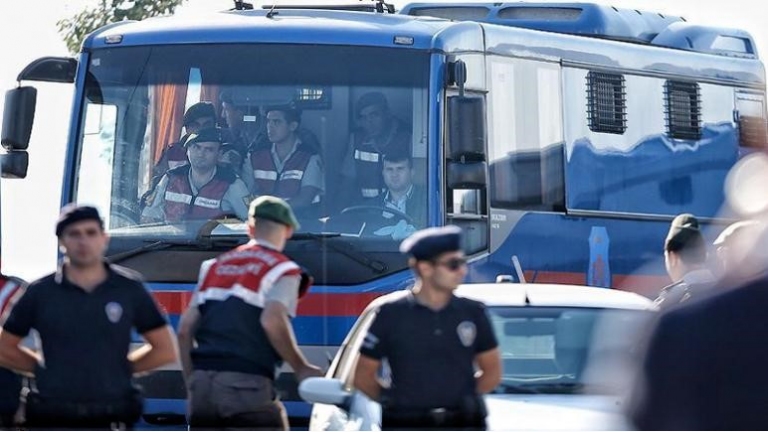 Security services continue to commit deportation offenses against Syrians with residency cards, despite decisions and assurances from Turkish Interior Minister Süleyman Soylu that only those with a temporary protection card from another state, or  those who do not have any card will be deported from Istanbul.


Youth victims of deportation .. And families deprived of breadwinners

Turkish authorities in Istanbul continue to deport foreigners under the anti-illegal immigration clause, including Syrians, who do not have a temporary protection card, according to Soylu.

Hicham was deported to Syria by the Turkish authorities a month ago, although he has the “Istambul” Residency card. He was forced to leave his wife, three children, and his disabled parents. “He was our only breadwinner,” Abu Hicham told Rozana. The father was not even allowed to say goodbye to his son who was shot by the security guards during his attempt to enter the cross the Turkish borders so as to spend Eid al-Adha holiday with his family.

“The Turkish police knocked on the door at midnight, barged in and searched the house, and asked for our identity papers,” Abu Hisham tells Rozana about the details of his 21-year-old son’s deportation. He adds: “Hisham and all the family members owned a residency card. We don't know why he was deported to Syria?”

He pointed out that his son had been working with Turkish tailor for three years, without having a work permit. “But that was not a reason to deport him,” said Abu Hisham, adding that his three brothers have also been fired recently because they did not have work permits. “Why was Hisham detained and then deported?,” wondered Abu Hicham.

Abu Hisham adds that his son was detained in a police station in the European part of Istanbul, to be transferred to a prison for expatriates with dozens of young people, and then deported to Syria, without trial.

Last November, the Turkish Ministry of Justice issued the list of the number of foreign prisoners in Turkey. 2,936 prisoners from 108 countries are in Turkish prisons, and the Syrians are at top of the list with 622 prisoners.

Following his deportation 25 days ago, Mustafa had no choice but to illegally re-enter Turkey to spend Eid al-Adha with his family. His repeated attempts to cross the border led to his death by the Turkish border guards. According to his father, Hicham was then buried in the village of Azmardin in Idlib countryside.

Hisham Mustapha comes from the Safira area, in Aleppo countryside, and took refuge in Turkey in 2016 with his family.

In a survey issued through official identities a few days ago, the "Bab al-Hawa" border crossing, documented the number of Syrian deportees, which reached 6,160 last July, 4,370 in June, and 3,316 Syrians in May.

In recent days, Turkey, and Istanbul, in particular is witnessing an intensive security campaign against Syrians and foreigners who do not have identity papers, as well as those who have residency cards issued by a state different from the city of residence.

Return after deportation is difficult to happen

The story of Hisham's deportation is similar to Firas Hajjar, 23, who was detained by Turkish police last month in his workplace in Esenyurt district with a group of young men, despite having the Istanbul residency card, he told Rozana.

"We were driven to a police station in Esenyurt. There, we were asked to sign documents with our names, without knowing the nature of these documents," Hajjar said.

"After that, we were taken to a police station in the Asian section of Istanbul and we were chained, and then they took us to the Syrian border in a bus with 37 deportees, including me and six young men, all of whom hold the Istanbul residency card.”

El-Hajjar stayed in Sarmada city in Idlib for 11 days. He painstakingly tried to enter Turkey by communicating with the Turkish Immigration Department, which allowed him to return, on August 2, with the remaining deported youths who could not return to Turkey despite having the residency card.

According to Rozana monitoring, the Turkish authorities have deported many Syrian refugees, who do not have temporary protection cards, following the decision of the Turkish Interior Minister.

The Turkish authorities also deported many of those who had Istanbul residency cards and elsewhere in contravention of the recent decision of the state, which does not permit the deportation of the temporary protection card holder from Istanbul, but rather to the state in which the card is issued.

Human Rights Watch previously accused the Turkish authorities of detaining a number of refugees to force them to sign voluntary return papers to Syria and forcibly return them.

On July 22, the Information Office of the Governor of Istanbul issued a statement confirming the continuation of the deportation of foreigners entering the country in an unlawful way, as part of a scheme to fight illegal immigration.

The state has given Syrian refugees with temporary protection cards issued in provinces other than Istanbul and living in Istanbul a deadline of August 20, 2019, to return to their provinces.

The elderly are also victims of deportation

In mid-July, Turkish authorities deported 26 Syrians from the countryside of Damascus who were transferred to Afrin, north of Aleppo, according to "Ghouta Media Center."

According to the center, the deportees were arrested by the Turkish police in the Esenyurt area, because some of them had residencies from another state, or others did not have a temporary protection card, and were then detained in a prison adjacent to Sabiha Airport in the Asian section of Istanbul.

Abu Abdo, one of the deportees, tells Rozana the details of what happened to him: “I was shocked when I arrived in Afrin countryside, since I expected to be deported to another state.”

"After we were detained in Esenyurt, we were taken to a prison in the Asian part of the city. There, we stayed for five days, most of the time tied with plastic wires. We were asked to sign papers which content we did not know, and which, according to the Turkish police, were routine measures. On the fifth day, we were transported by buses to Hamam Crossing and from there to the Afrin countryside. We were both confused and shocked as there were no places to shelter since we were not allowed to take our belongings from our homes in Istanbul,” Abu Abdo says.

Basil Abu Yazan, a displaced person south of Damascus, did not complete his first year in Turkey, where he arrived nine months ago, to return to Syria deported despite the measures he has taken since the start of the campaign in Istanbul.

Abu Yazan told Rozana how he began to avoid taking public transport for fear of searches, and he avoided the main streets while he was going back from work. Nevertheless, he was stopped by police near Aksaray Square and was transferred with a number of young men to a prison in the Asian part of Istanbul where they were photographed and taken to the Bab al-Hawa crossing on the same day.

According to Abu Yazan, the deportation campaign was not limited to young men. Among the detained group, there was a 60-year-old man who was also deported to Syria without taking into account his age, or talking to him, and checking his papers.

Random deportation operations caused families to be torn after young people were separated from their families in Turkey. This was the case with Abu Ammar, who left behind his wife and newborn baby.

"I did not expect that my return to Syria would be so close. Alone without my wife and child, I am living in a state of chaos. I do not know what to do," Abu Ammar tells Rozana about the details of his deportation.

“I was stopped by the Turkish police when I was going to work at 8 am. The policeman asked my residency card and I gave him a paper showing the date of the issuance of the residency card in Bursa, near Istanbul. I also showed him my passport, so my deportation was fated on the same day,” he says.

"I am currently in Afrin, while my wife and my child are in Istanbul. I do not know how to act as I do not have the ability to re-enter Turkey,” he adds.

After Turkish Interior Minister Süleyman Soylu decided to deport Syrians with temporary protection cards from outside Istanbul to their states, Turkish schools there demanded Syrian students who do not have the Istanbul residency to transfer their registration to their home states.

Baha Hamza, a Syrian teacher at a temporary school in Istanbul, told Rozana earlier that Turkish schools had suspended the registration of dozens of students with temporary protection cards other than Istanbul and called on parents to return to their home states to complete their children's tuition.

Likewise, Turkish schools refrained from enrolling Syrian students holding a residence card of a city other than Istanbul.

Turkey hosts about 3.5 million Syrian refugees, distributed in cities and towns in different parts of the country, most notably Gaziantep, Hatay, Urfa, and Istanbul, while 250 thousand of refugees live in camps near the Turkish border with Syria in the south of the country, where most of them fled to escape the war in their home towns in Syria.