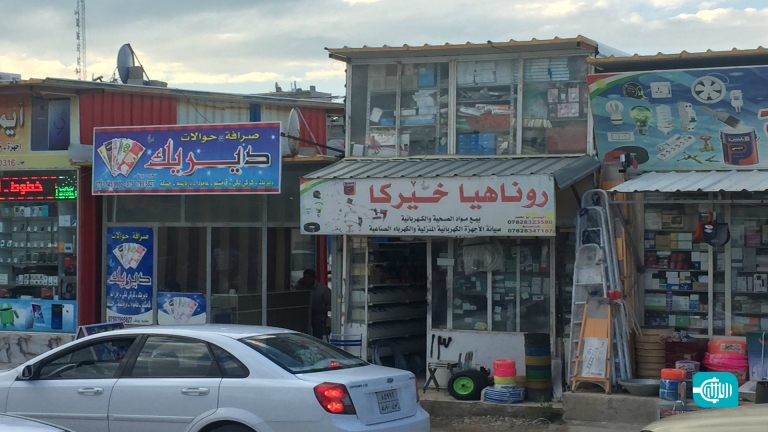 Every month, young man, Sewar Dirki would leave a portion of the income he earns working at the oven, to send it through a transfer office operating in Domiz camp near the city of Dahuk in Iraqi Kurdistan.


Five years ago, Sewar started working in a pastry oven in the city and lived in a tent along with 3 other friends.
"I have practiced several professions since I arrived here, and I started sending 200 dollars per month to my family," said Sewar during an interview with Rozana.

He got rid of rent and transportation expenses when he decided to build a tent and open his own oven inside the camp. Now he is getting himself ready to celebrate his marriage.

After five years of asylum, Sewar started considering engaging into a relationship and settling down. He contacted his family and coordinated with them to marry this year: "I send as much money as I can to my parents and save some to secure the marriage requirements."

Mohammed, another young man who came from Qamishli to the camp, told Rozana: "I came to Iraqi Kurdistan a little while ago. Thank God I have my own business and car now. I’m also supporting my family, who stayed in Qamishli, to overcome the economic hardships in the country."

About 13 exchange offices are located in the camp, allowing millions of remittances though under zinc ceilings.

The owner of the first money exchange office in the camp, Farhad Hassan, told Rozana that "these offices have other remittances at Syrian camps, ranging between 200 to 1,000 dollars, sent by young people working in Iraqi Kurdistan region to support their parents in Syria.”

Due to the openness of trade between northern Syria and Iraqi Kurdistan, the value of remittances rose slightly, according to Hassan. He said "there has been a change in the value of remittances with the opening of trade between Syria and Iraqi Kurdistan. However, no significant changes have occurred because our offices are not licensed and the transfer of large amounts through such offices cannot be safe, unless the money sender is a personal acquaintance of the trader."

Abu Ahmed, the owner of a money exchange office in the camp, says: "What is transferred from the Domiz camp constitutes a large part of the total amount transferred from Iraqi Kurdistan to Kurdish areas in Syria. Domiz remittances are worth 1 million dollars per month. Of course there is mutual trade between the parties and the transfer is carried out through a method, in which the office making the transfer is responsible for it and the money is delivered to its owner as soon as it is transferred."

"The main reason for transferring money to Syria is to support people living there so they won’t have to resort to asylum. If a family cannot send one of its members to Europe to provide financial support, they would send him here to work," Abu Ahmed comments on the reasons for the increase in transfer payments.

These offices are operating without being granted a formal permit from Iraqi Kurdistan authorities. However, they are certified and recognized by the United Nations High Commissioner for Refugees (UNHCR) as currency exchange offices rather than as money transfer offices.

To what extent does the Syrian regime benefit from Syrian refugees' remittances?

Some economists assume that the main party benefiting from the value of remittances is the Syrian regime. "The ongoing flow of remittances, whether in dollar, euro, Turkish lira, or Iraqi dinar, means foreign cash flow; thereby somewhat improving the value of the local currency (the Syrian pound), says Khorshid Alika, an economist and member of the Kurdish Economists Association.

"Remittances may turn to medium investment activities, such as consumer goods, business services market, and land and real estate markets, which could improve economic growth," said Joan Hammou, an economist studying the importance of remittances to refugees, during an interview with Rozana.

"At the macroeconomic level, remittances are vital to the balance of payments and the development of sources of foreign exchange from unforeseen sources," Hammou added.

The economic value of these transfers represents the main relief for the people in Qamishli facing hard economic conditions, especially in Upper Mesopotamia and Syria. However, the economic study carried out by Khorshid Alika and entitled “The Economic Effects of Remittances on the Economy of the Kurdish Region in Syria" argues that these remittances contribute to the increase of disguised unemployment in the country and constitute a push factor for youth migration.