Idlib: Children Born Under Trees Due to Heavy Shelling 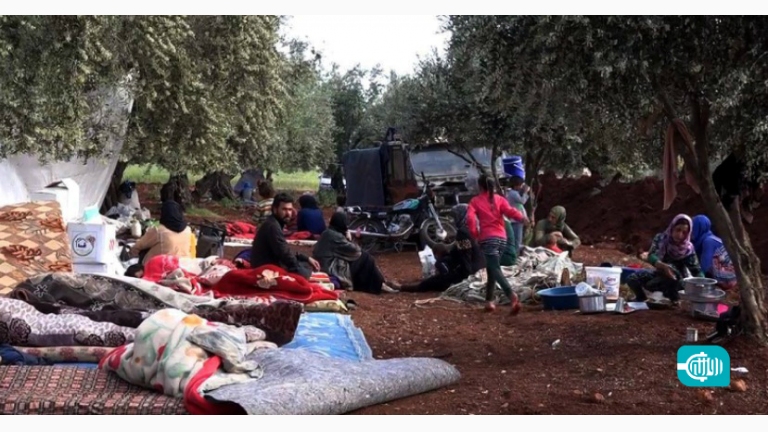 Noor Raslan, a resident of the town of Kafr Nabl, told Rozana: "We run out of options. My wife was about to give birth and the hospitals in the area were completely destroyed. We had to escape death and heavy shelling."


He continued: "Even the doctors left. Bombs rained over our heads. I had to go to the western countryside of Aleppo without thinking in order to protect my wife and the baby.”

Over the past two weeks, the Syrian regime and Russia have targeted and bombed 16 hospitals and medical centers, making them out of service completely. The hospitals’ staffs were obliged to work under the state of emergency and receive critical cases only. Thus, 169 civilians have been killed by shelling since 29 April, while 180,000 were forced to flee.

Talking to Rozana, Obeida Dandoush described the situation in Idlib as “tragic,” adding that "some of the fugitives who escaped the shelling sat under the trees, while some others hardly managed to rent houses."

The southern countryside of Idlib witnessed the displacement of thousands of civilians towards the Syrian-Turkish border, since the beginning of this month, as a result of the heavy military campaign launched by the Syrian regime and Russia.

The Director of the Syrian Response Coordinators Team, Mohammed al-Hallaj, explained to Rozana that more than 350,000 civilians have been displaced since the beginning of this month, as a result of heavy shelling on the towns and villages of the southern countryside of Idlib.

Al-Hallaj added that about 550,000 civilians fled the southern countryside of Idlib to the villages of Atma, Sarmada, Harem, Salqin and Darkush, and to the countryside of Aleppo, specifically to Atarib and Afrin, from the beginning of April until the 15th of this month.

In December, 2017, Idlib and North Hama were included by the "reduction of escalation" agreement reached by the sponsors of the Astana talks, i.e. Turkey, Russia and Iran; in addition to the demilitarized zone agreement signed between Russia and Turkey on 17 September.

Mohammed al-Ali, a resident of the village of Abdin, south of Idlib, told Rozana that he “was displaced along with his family after the city of Salqin in the north-western countryside of Idlib was bombed." He pointed out that "the locals of his entire village fled towards the border zones. Thus, when 60 percent of the area was completely destructed, all the inhabitants left except for some youth.

The military campaign launched by the Syrian regime in cooperation with Russia is considered the most violent in years, as the bombing in the past two weeks killed more than 150 civilians, and injured dozens of others, according to Rozana’s correspondent.

The southern countryside of Idlib and the northern countryside of Hama witnessed an extended military campaign launched by the Syrian regime and Russia since the end of April, despite the fact that the region is under the terms of the Turkish-Russian agreement reached last September in the Russian city of Sochi, which provided for the establishment of a demilitarized zone and maintaining the cease-fire.

According to the United Nations, more than 180,000 people have been displaced due to the bombing of their towns and villages in north-west Syria, between 29 April and 9 May.
The Response Coordinators Team asserted in a statement, issued earlier, that 44 schools in Idlib province were targeted by the forces of the Syrian regime and Russia during the first week of May.

The Team added that the destroyed schools are among the educational facilities of the Idlib Directorate of Education, pointing out that the shelling destructed some schools completely, while damaging 5 percent of other educational establishments’ structure.

Belgium, Germany and Kuwait called on the UN Security Council to hold an emergency meeting this week to discuss military escalation in north-western Syria, which has been waged by the Syrian regime and Russia since late April.