Laughs Escaping The Pain of Syrian Revolution... Here are Some of Them 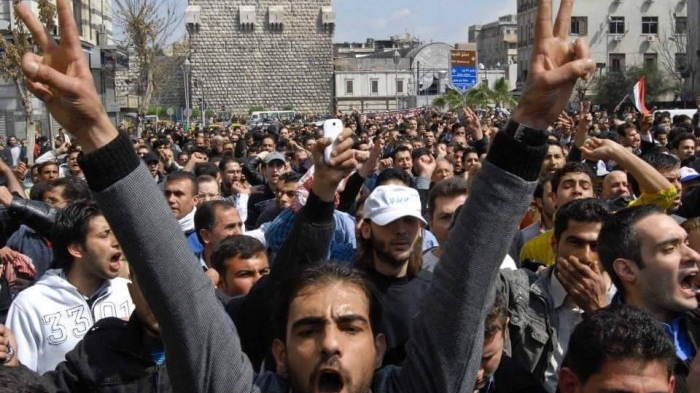 Have you ever escaped the Syrian regime security forces during the demonstrations at the beginning of the revolution? Perhaps you should have looked at your face, because not only did it show anxiety and fear, but there were also funny expressions, and maybe even wry laughs, similar to the thousands of situations that Syrians have gone through. They smiled and laughed despite their pain and suffering as these situations have formed a part of the memory of the Syrian people who are still recounting them to date, or still living similar situations up to now.


The longest rak'ah (prayer unit) in the history of the revolution

The Syrian demonstrations had their own specificity. The security forces of the regime have monitored all the movements of the demonstrators, especially in the mosques, which were often the starting point for the demonstrations. However, some of the prayers during the time of the revolution were longer than usual.

Akram Muhammad, a young man from Lattakia, told Rozana: "While we were performing the Tarawih prayers in 2012, a young man entered, ran towards the imam, and whispered to him during the prayers, and we did not know what he had told him."

Akram continued: “After this, the imam took too long in the rak'ah. The prayers did not finish, while the worshipers started sweating. This has made some of them believe that the sheikh had fallen asleep for example. It later turned out that the young man had informed the sheikh that the security officers had taken away the worshipers' shoes, and were waiting for them outside the mosque."

Akram went on: "The worshipers came out of the mosque barefoot, while I found one pair of my shoe, and the other one was a little farther away. Suddenly, one of the people shouted loudly, Allahu Akbar. All of the others started shouting, and I was not even able to tie one pair of my shoes."

Akram added: "I wore one pair while I grabbed the other in my hand. We fled to a nearby alley where there were no security officers. We were then surprised that a young man was held by the security officers while his brother was next to us."

Akram finished by saying: "The brother suddenly ran and screamed loudly to his detained brother: ‘Muhammad, blow yourself up, do not let them arrest you. Blow yourself up.’ Within seconds, security officers released Muhammad and fled the area."

Al-Madini continued: "Despite the doubts of one of the security officers, and Wahid’s knowledge about this, he kept calm and remained cold blooded to an unbearable level."

Al-Midani went on saying: "The security officer had seen Wahid in several places in Damascus and close to the demonstrations, at a time when he had always been leaning on a wall in front of a building and holding a cigarette in his hand as if he were sitting in front of his house.  Indeed, he had not been arrested, perhaps he had not left Syria at all, and stayed in place."


USB drive and “sandwich-making” laptop
The demonstrators had taken advantage of the Syrian security’s non-interest in technology. Hassan Hussain, a young man from the city of Homs, recalls an incident that occurred in his city. He told Rozana: "On one of the checkpoints of the regime forces in the countryside of Homs, the officers stopped a friend of mine and inspected him. They discovered that he had a USB flash drive. At that moment, the officer was in a state of ecstasy at the thought of catching the most dangerous terrorist in Syria. He gave the young man a sly smile and said: ‘Ha Ha, we caught you. Show us the content of the USB drive. Certainly, it contains atrocious secrets about the demonstrations.’ Meanwhile, the officer brought a laptop, which he seemed unable to use.”

Hassan continued: "The police officer inserted the USB drive in the computer. However, access was denied either because a pass word was required or due to confidentiality parameters that protected the files in the drive. The officer was unable to find anything, so he got angry and pulled the young man toward the laptop, asking him to open the USB drive. The young man replied: "Sir, the USB drive needs a configuration.’ The officer answered back:  "Okay, do it.’ The young man obeyed the order. Yet, he deleted everything the USB drive contained. Then he approached the officer and said to him: ‘Here you are sir. I swear by Allah’s name that the USB drive is empty as I told you’.  At that point, the officer felt guilty of wrongfully accusing the innocent man. However, his feelings of remorse did not prevent him from beating the protester so as not to bring a USB flash drive again."

Mu'ayyad, who is also a young man from Homs, recalled another story. He told Rozana: "On one of the stands in a market in the city of Homs, which often contained stolen goods, before 2013, some of the furniture thieves (who stole the houses in neighborhoods where people were forcibly displaced) are selling the stolen items without being aware of its quality or value at all."

He continued: "One day, a relative of mine went to the market, and headed toward one of these stands where he saw a laptop that was in an acceptable condition; and when he asked the merchant about the price of the computer, he replied: ‘you mean the sandwich maker?’ When my relative did not understand the reply, the vendor reasserted: ‘Did you mean the sandwich maker?’ At that moment the potential buyer answered: ‘Yes, absolutely.”

The merchant replied, "You can have it for 400 Syrian pounds.  But, you have to handle the device in the right way. It seems like it is manufactured abroad and has its cable disconnected."

Hand me ‘the rocket’

Abu Mohamed, 30, did not take into consideration the fact that there is no longer any possibility of mentioning some of the words that were previously spoken in Syria, in light of the Syrian revolution, the intensity of protests, and the increase of arms use.


Abu Mohamed, who lives in Aleppo, told Rozana: "I work in the construction field, and at one point I risked being forcibly disappeared by the Syrian intelligence services. However, I managed to save myself and correct the situation.”

In May 2013, a man, who turned out to be an important figure in the regime’s Intelligence services, approached Abu Mohamed, asking him to supervise a construction project. However, unaware of the consequences of his words, Abu Mohamed asked his apprentice to bring him the "Rocket"(a tool used in construction work).

According to Abu Mohamed, the customer got worried and started screaming "A rocket, what are you talking about? Where is it? Where did you hide it? Suddenly, he disappeared. Surprisingly, after an hour, a security patrol came and arrested me as if I was a terrorist who owned weapons and missiles."

Abu Mohamed spent two hours, in one of the security branches in Aleppo, explaining to the interrogator that he did not have war missiles, and that he meant by the word “rocket” a mere building tool. He further clarified that it was a misunderstanding. After understanding the situation, the intelligence officer lectured Abu Mohamed for a while about homeland security and the regime’s resilience to extinguish terrorism.

Abu Mohamed added: “Thank Allah that I came out of this situation, otherwise I would be the victim of a construction tool.”  He wondered: "What is the punishment for owning a construction rocket?"

It is noted that the protests and peaceful demonstrations calling for freedom and overthrowing the regime began in mid-March 2011, and soon spread throughout Syria.